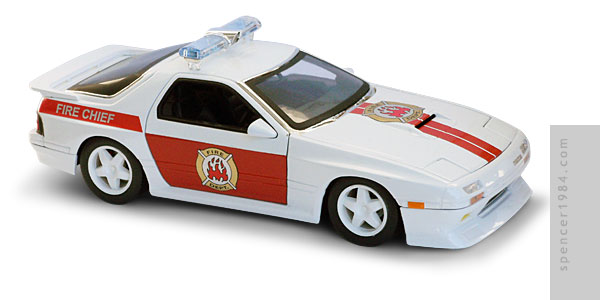 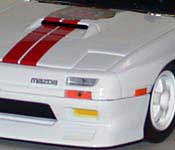 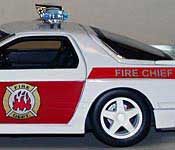 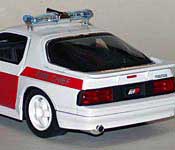 I started by disassembling the car and removing the original graphics (you can see the August 2004 tip for more about removing tampos). The inside of the body and the chrome-plated engine were painted black. The doors were repainted based on Siren's toy model, and the glass trim was finished using Bare Metal Foil.

I was originally going to use custom decals for Siren's door and hood badges, but I wasn't happy with how they looked. Fortunately, I was able to get what I needed through ReproLabels' new subsidiary, PrototypeLabels.com. The labels were printed exactly how I wanted, and were so thin that they don't stand out as "stickers" on the finished model. The door badges, hood badge, and rear fender lettering was all done with PrototypeLabels stickers.

The hood scoop was slightly offset on the RX-7, which prevented me from copying Siren's design exactly. I ended up placing the stripes (made from automotive pin striping tape) centered on the hood, and the badge centered on the scoop. The stripes are actually cut away so that they meet the edge of the badge instead of going under it, preventing any "lumps" from appearing on the badge. For the final element, Siren's light bar was taken straight from AMT's Taurus police car model.