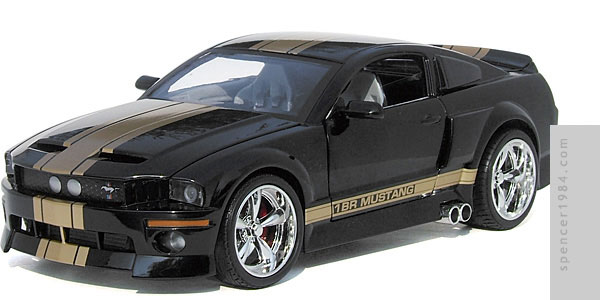 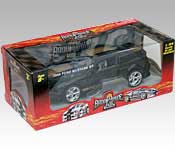 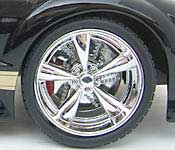 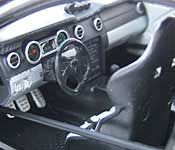 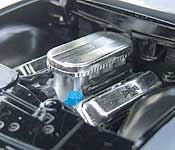 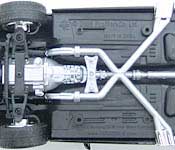 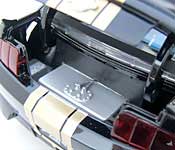 NOTE: This is a third release of an existing model, and this review will focus on the changes made between the cars. You can see the original review and second review for more details.

The 10th series from 1 Badd Ride continues with the same three-window box design that they've used before. The only changes are the cars flanking the 1BR logo (a silver '05 Mustang and a silver Ford GT) and the cars on the end flaps (a yellow Corvette and a silver Mustang). The image on the back of the box has not been updated, and shows the hood scoop and 10-spoke wheels from series 1. The vital stats remian unchanged. Inside, the car is fully closed, with plastic bands holding the hood and trunk closed and the plastic tray holding the doors closed.

The '05 Mustang has been a member of several series, and has held up surprisingly well. In fact, I'd say this release is closer to the original issue than it is to "Blown" version: the seams all still look sharp & tight, and I don't see any quality control issues like I did with the "Blown" car. The hood here is an all-new design with two open vents near the front. The engine is back to its original naturally-aspirated version, though the wheels are the newer 5-spoke design. The newer (solid black) grille is used, and while I still miss the printed "mesh" grille I have to admit that the solid black looks pretty good on the black body. The paint is light years beyond the "Blown" series, and even looks better than some of the original release cars. The black is nearly mirrorlike, and the stripes are straight and clean. The gray on the seats also looks much better than the blue they used earlier.

The doors, hood, and trunk still open, and the front wheels can still be posed. There are no bent hinges this time, and I'm happy to see 1BR has gotten their QC back.

No change: it's modified, but still relatively accurate in both shape and scale.

After the "Blown" series disappointment, I was ready to pass on this one. I'm glad I gave it another shot, though: the casting quality is still very good, the mechanics are back to the quality of the first releases, and the paint is simply outstanding. If you like the design, I highly recommend tis one - even if you have an older release of it.