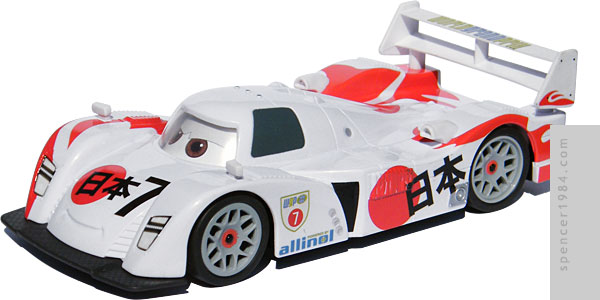 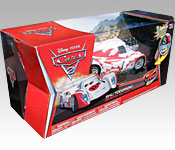 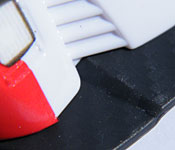 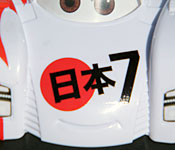 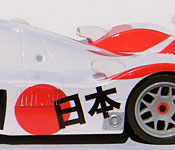 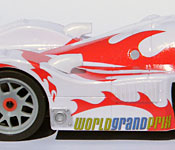 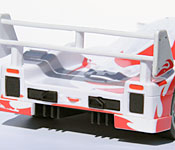 Following the critical and commercial success of Cars, Cars 2 was only the second sequel created by Pixar (after Toy Story 2). Director John Lasseter claimed that the idea for the movie was sparked by his travels around the world, and his imagination of what Mater might do in certain situations outside of Radiator Springs. The reason for Mater's traveling was a series of international races, run by some of the greatest racers from around the world. Shu Todoroki represents Japan in the races, and his back story mentions his coach being the only Japanese winner of the Le Mans - a reference to the Mazda 787B driven to victory in 1991 by Volker Weidler, Johnny Herbert, and Bertrand Gachot.

Air Hogs tends to use irregular shaped packaging for their R/C vehicles, and the Cars 2 line is no exception. The front left side has a sideways "V" cutout that goes about halfway back, while the front right corner is truncated at a 45° angle. The window extends from the front of the box across the top to the back, with no parallel lines framing it. The front panel has a drawing of Shu, the Cars 2 and Air Hogs logos, character name, and feature callouts. The age restrictions and other warnings/tech notes are spread across the bottom of the front panel and up the small panel made by the 45° cut. This end of the box is darker than the rest of the box (separated from the bright red section by a "V" that mirrors the cutout at the other end of the box), and has the Cars 2 logo centered on the end flap. The interior tray has an image of Porto Corsa, and Shu is held down with three screws. The remote is held to the tray with a wire twist tie, and the batteries and instructions are packed under the tray.

Todoroki has the most complex body of the Air Hogs Cars series, but they managed to pull it off just as well as they did with their simpler designs. THe casting is sharp and clean, with separate mirrors, scoops, and rear wing. The only parts that look incorrect are the oversized wing struts, though even these aren't too bad. Wheels are gray plastic with red painted centers and soft vinyl slicks. For the first time in the Air Hogs Cars series, the chassis has some detail to it: the front splitter and rear diffuser are both chassis elements. The splitter is especially nice, with a subtle weave pattern to simulate carbon fiber. The Ka-Riu dragon graphics are done well for the most part, but show misses and cracking over the right side vents. The hood and left side have the Hinomaru along with "Japan" written in kanji; and while the hood looks good, the side also has issues over the vents. The side windows and sponsors are good, but there are some spots missing around the back bumper and the rear vents have very soft edges. So overall he looks great from some angles, and not so great from others.

Shu is a full-function R/C car, and zips along smooth surfaces pretty well. The remote unit is identical to the other Cars 2 line, but has a sticker unique to Shu so that you know who it belongs to. Air Hogs also included a neat feature on this series, where the eyes are tied to the steering mechanism. So when you turn left, Shu looks left.

Shu is a near perfect match to his cartoon model. The shape and graphics all look spot-on, and he has all of the appropriate details. If it wasn't for the paint misses (which always seem to be Air Hogs' weak spot), this would earn a perfect score. Scaling matches the others in the 1/24 Cars 2 series.

Shu is the best of the Air Hogs Cars 2 series so far. As a lesser-known character, he likely won't have the appeal that Lightning McQueen or Francesco Bernoulli have, but he is well worth tracking down. Highly recommended.