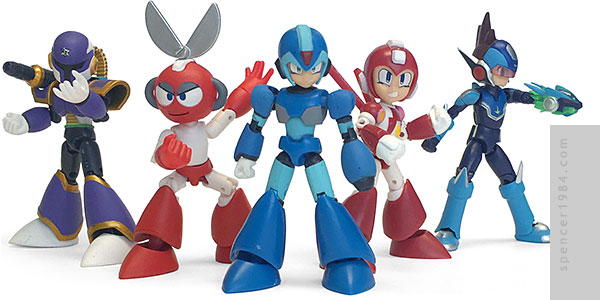 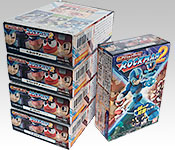 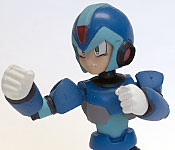 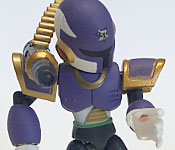 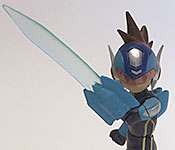 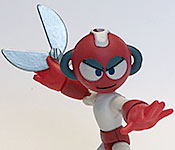 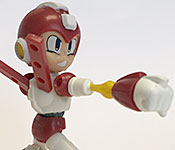 Super Mario Brothers and The Legend of Zelda, respectively. This new format, coupled with the character's ability to gain new powers after defeating the various game bosses, made the game a hit among both players and critics. The franchise has gone on to include over 50 games across multiple systems, plus a media empire that includes TV, books, and comics.

Each box features a large photo of Mega Man X centered on the front panel, with smaller photos of the other four figures making up the background and the series name in large letters near the top. The top panel has close-up portraits of the five characters in order: Mega Man X (Rockman X), Vile (VAVA), Star Force Mega Man (Shooting Star Rockman), Cut Man, and Super Mega Man (Super Rockman). A small white window under the portraits tells you which figure is in the package, and is the only thing preventing these from being true blindpacks. The back panel has slightly wider views of all five, along with a note about whatever bonus item is included with that figure. Inside each box is a plastic part bag containing four chambers that hold the figure's body, sprue of hands, head, and bonus item.

All five figures are cast in a somewhat flexible plastic - not as soft as the Five Nights at Freddy's figures, but moreso than ABS. There's enough give to allow for the snap assembly, and swapping parts is easy. Casting is generally clean and sharp, especially considering how small some of these components are, and everything fits together nicely. Paint is equally well done, with only a few edge misses her & there but solid coverage and excellent registration. Articulation is pretty standard for all five: ball jointed ankles, hinged knees, ball jointed hips, swivel wrists, hinge elbows, ball jointed shoulders, and a ball jointed neck.

First in the group is X, in two-tone blue as he appeared at the beginning of Mega Man X. He comes with two sets of hands, one set of closed fists and one set in a slightly open grasping gesture. In addition to the standard articulation, X also has a mid-torso ball joint that allows him to flex and turn. His joints are nice & tight, though the way his elbows are painted leaves obvious cut lines in anything other than straight-arm poses.

Next is Vile as he appeared in Mega Man X. He has more paint apps than most, which looks great but also leaves more room for error. He also comes with two sets of hands, and the open set is in a much wider grip (perfect for "Mwah-ha-ha" villain moments). His ammo belt is also a separate piece that needs to be plugged into his shoulder cannon and backpack. Whoever mastered it is apparently unfamiliar with how firearms work, because the belt feeds the rounds into the gun sideways. There was also a slight misassembly on mine, with the arms turned inside out. Like X, Vile has a mid-torso joint to improve his range of motion.

Third here is Mega Man as he appeared in Mega Man Star Force. He has the single most elaborate paint job of the group, plus transparent parts for his visor and Mega Buster to give him a truly unique appearance. Only two hands are included, fully closed and fully open, and are both for his right arm. It looks like he's also supposed to have a waist joint, but if he does it's stuck fast on mine and I don't want to break it to find out I was wrong. As with X, the paint apps make posing a little difficult because any bending at the hips or knees throws of the lines.

The penultimate figure is Cut Man, going all the way back to the original Mega Man. He has two complete sets of hands, and his are easily the best of the lot: one set is regular fists, but then he also has a left "Capcom Hand" (middle & ring fingers together, all others splayed out) and a right grasping hand made to hold his Rolling Cutter. The way the fingers are posed allow for myriad throwing positions, and when not in his hand the Rolling Cutter plugs into a port on top of his head.

Last up is Super Mega Man, in his combined armor mode from Mega Man 7. He only has two hands, both closed fists, and the Booster Jump wings may or may not already be in place on his back (I had one of each). He has a waist joint in addition to the usual articulation, and also has the single floppy joint of this entire set with a somewhat loose left elbow. It's not enough to prevent posing, but there is definitely a range where the joint is almost completely frictionless.

Each figure includes one bonus item, most of which are designed to work with that character. X has an optional left arm to replace the Mega Buster with a standard hand, which snaps on just below the shoulder. Vile's bonus is a glass of Bourbon, which can be held in either of his grasping hands and is included as an homage to his appearance in the Rockman X manga. Star Force Mega Man has a replacement for his left forearm, swapping Omega-Xis' head for a transparent blue blade. Cut Man has the only "generic" bonus, a Met (a.k.a. "Hardhat') figure cast in transparent yellow. Super Mega Man has a replacement right arm featuring a rocket blast effect to recreate his Rocket Buster attack. As with X, it gets snapped into place just below his shoulder.

All five figures are excellent matches to their respective game designs, and do a great job of including useful articulation without sacrificing anything. It's also worth noting how Bandai did an excellent job representing three distinct generations here: Cut Man and Super Mega Man look older, X and Vile are more sophisticated but still part of the same aesthetic, and Star Force Mega Man is clearly the newest model. This isn't just because Bandai copied the game designs, either: there's a subtle size shift among them, with the classic models having thicker, clunkier chassis and the newer characters getting more streamlined and miniaturized. The series is called "66 Action" because of the characters' 66mm height, but that's a bit of a misnomer since Super Mega Man is the only one who is actually 66mm tall in a neutral standing position. X and Vile are each about 70mm, Star Force is about 78mm to the top of his hair, and Cut Man is a full 80mm to the top of his blades. So the "66" should be taken the same way as any other figure scale: an approximate of a "standard" character, with others ranging from there so that they all scale to each other appropriately.

These are fantastic figures by Bandai. They look good, their articulation is appropriate and useful, and there's an excellent cross-section of Mega Man's history. The only potential downside is their limited availability, and as a result we're unlikely to see the entire cast of Mega Man in the future. But what we have here is excellent, and they're well worth picking up.