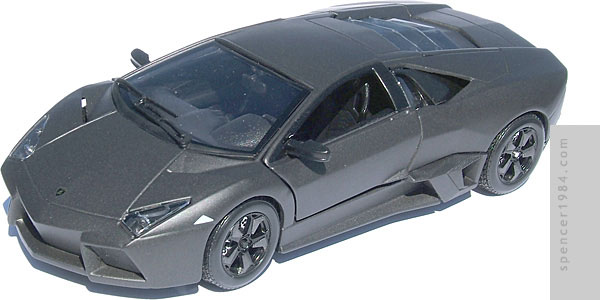 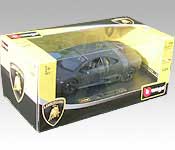 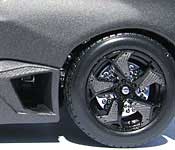 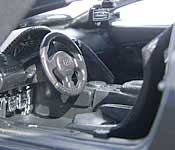 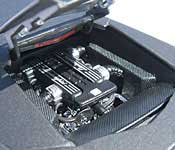 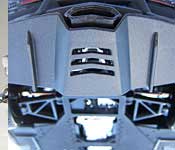 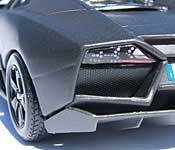 The Reventon is part of Bburago's "Star" collection, which appears to be their latest toolings (as of August 2008). The window box is primarily yellow and black, with a gray-to-black band separating the two colors. The front of the box has the Bburago and Lamborghini logos, scale, legal warnings, and "Italian Design." The top repeats all of this except for the warnings, but has "die cast metal with plastic parts" in an oval along the right edge. Both logos, the scale, and the "Italian design" also appear on both end flaps. The back and bottom of the box carry the rest of the legal information, including two callouts that the car was made in China (once printed, and once as a sticker). A small gold foil sticker with the Lamborghini logo is in the top right corner of the back panel. The yellow and black color scheme is continued inside the box, where some careful design and a few strategic cuts in the outer box are used to allow the plastic mount tray to sit at an angle. The car is held to this tray with a single screw, and the doors and rear hatch are held closed with plastic bands.

As mentioned above, this is one of the newest toolings from Bburago, and it shows. The F22-inspired body is nearly flawless, which is no small feat considering the complexities of the design. All of the scoops are either open or cast deeply enough to look open, and the panels are all fit together very nicely. The textured carbon fiber side vent is also done well, as are the plastic parts like the mirrors, grille inserts and rear diffuser. The only "misses" are wide gaps along the back edge of the rear hatch and along the inboard taillight nacelles. If you angle the car just right you can also see through some of the open scoops and out the other side of the car, but this is still preferable to filled-in openings. Most of the body is painted satin black, and looks flawless. A slightly deeper black is used for the window frames, cowl, wiper, and Lamborghini script on the tail. The turn signals are painted white and the third brake light is painted red. Silver is used for the fuel cap. The wheels are black with satin black carbon fiber panels, and chrome brake rotors. The rear wheel hubs are chrome and the front hubs are black. The windshield, side windows, rear louvers, headlights, and taillights are cast in clear and detailed with paint: black trim for the windshield, and black and red for the taillights. Chrome is used for the mirror inserts and headlight backers. Inside, the cockpit is very detailed with lots of texturing: carbon fiber for the dash & center console, minimal padding for the racing seats, and accurate dashboard vents and controls. The gauge cluster and Lamborghini logos on the seats are printed, and the screen in the center of the dash is done in a smooth, semi-gloss black. The engine is similarly detailed, with multiple layers, textures, and finishes to give a nice, deep look. The bright chrome of the lower engine looks wrong, and light gray or silver would've been more realistic looking here.

The engine hatch and doors open, and the front wheels are steerable. The hinges all work well, and Bburago did a nice job of minimizing them.

The Reventon is a very complex design, and Bburago did a great job with it. I especially like the attention payed to the subtle creases like those in the rear fenders - this would be an easy detail to omit or exaggerate, but the way it was cast manages to capture the 1:1's design flawlessly. The satin finish of the 1:1 car is also captured well, and the variations in finish from surface to surface capture the feel of the 1:1 nicely. Scale is a hair off, more like 1/24.5 or 1/25.

Overall a very nice replica of one of the more unique designs to come from Lamborghini since the Countach. A few concessions had to b made thanks to the scale (like the rear hatch gap), but they don't take away from the overall experience. Recommended.