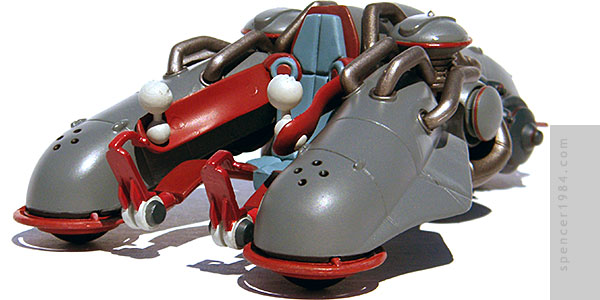 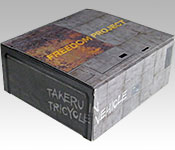 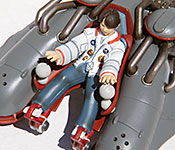 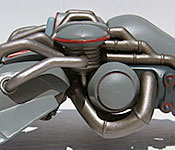 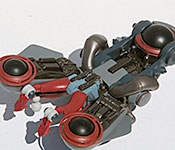 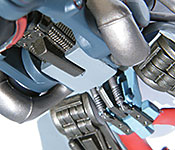 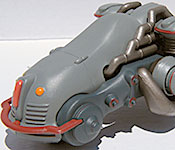 When Earth becomes inhospitable to human life, society rebuilds itself on the far side of the moon in domed colonies. One of the citizens, Takeru, is sentenced to community service outside of the dome after an incident with his home-made racing vehicle on a public road. While outside, he discovers the remnants of a lunar mission and is driven to seek the truth about it and the current status of Earth despite the heavy handed censorship of the government. The series was sponsored by Nissin Cup Noodles for their 35th anniversary, and featured a number of additional marketing tie-ins.

The packaging is simple but effective, being a relatively small (6" x 6½" x 3"/150mm x 165mm x 70mm) cardboard box with a hinged top panel secured by a hook-and-loop fastener. It's printed to recreate a metal container: heavily weathered panels, vents, a pipe, and one panel with what appears to be an overhead bay door. "Takeru in Tricycle Vehicle" is done in a graffiti style across the bay door and around the corner, while "Freedom" is stenciled onto the opposite corner. "Freedom Project" is printed across the top of the box, and while it is much sharper than the graffiti or stencil it still shows pitting and deterioration to match the surface. The bottom continues the theme with the most severe rusting, the illusion broken somewhat by the presence of a bar code. A "Sunrise" sticker is placed on the panel opposite the bay door, but because it is so obviously a later addition it actually works with the overall theme. Lifting the top panel reveals a large window displaying Takeru and the trike. The inside of the flap has line art schematics, the title and vehicle info, and several screenshots from the anime. The figure and machine are sandwiched between two plastic trays that can be slid out either the panel with the bay door or its opposite.

Thanks to the unique design of the tricycle, there is no single "body" piece; rather, it is an assembly of dozens of components arranged to create a layered look. The closest thing to a main fuselage is a set of three medium/dark gray sections that are the engine cover and two arms. A smaller waist of the same color connects these three sections, and is surrounded by dark metallic piping. Between the arms is the control seat, which is dark red with blue/gray padding and off-white controls. The upper controls have hand-shaped indentations, while the lower controls have slings to loop over the driver's feet. Dark red bumpers circle the leading edges of the arms, and a third guards the rear of the engine cover. Two darker gray elements flank the engine cover, and four cylindrical parts are nested in the middle of everything. The underside is just as thoroughly greebled, with all manner of springs, pipes, hinges, and vents going between the waist piece and the three spheres that act as the vehicle's wheels.

All in all, it is just as complicated and raw looking as it should be, though there are a number of casting and paint issues that hold it back. There are very obvious mold parting seams throughout: around the outermost pipes on the arms, across the caps on all four cylinders, on the top and rear of the engine cover, the hand controls, and on all of the piping. There are also ejection pin marks on the dark red upper controls and under the seat cushion. The seat is not quite centered between the arms, and the engine cover halves are slightly misaligned. Underneath, the retaining ring around the front right sphere has a rough edge, while the ring around the rear sphere is partially warped. The paint is OK for the most part, but some dust is visible in the dark gray and there is either paint or glue slop in a few places underneath. There's nothing that absolutely ruins the piece, and the homemade nature of it does help mitigate somewhat, but the individual problems do add up.

A 1/24 scale seated figure of Takeru is included. Like the tricyle, it suffers from parting seams and some sloppy paint work. He can be seated in the vehicle easily, though his hands come nowhere near the controls.

This is a very accurate rendition of Takeru's vehicle, with all of the pipes and gadgetry that you could hope for. Katsuhiro Otomo's aesthetic is on full display, and you can clearly see the parallels between this and Kaneda's bike from Akira. Judging by the figure, it is a good 1/24 scale.

Despite the flaws, I really still like this. It has the right cyberpunk vibe, and is such a unique vehicle that it gets bonus cool points. It doesn't hurt that I found one for less than half of MSRP; if you can find a similar deal, it's absolutely worth picking up.