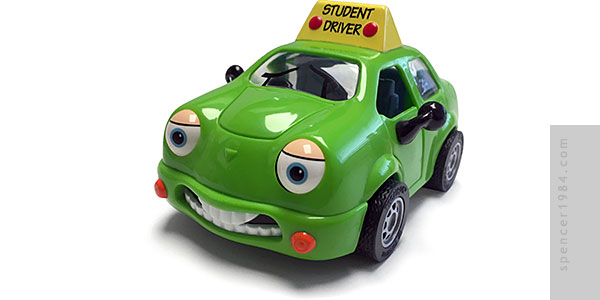 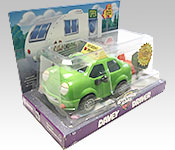 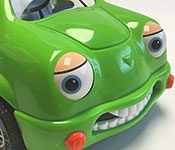 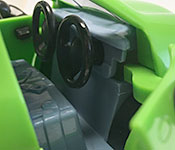 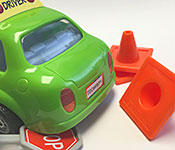 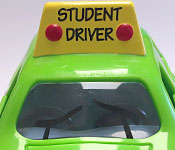 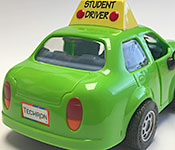 Davey Driver was the first "Limited Edition" release in the Chevron Cars line, released in June 1998 at a higher price point than the numbered series. A week later, Danni Driver was released as #11 in the main series. She was a straight recolor of Davey, packed in the same box with the same accessories but sporting a new body color.

Davey Driver is sitting on a base approximately 8¼" (210mm) x 4½" (115mm), with a printed generic asphalt surface. This base is approximately ¾" (18mm) thick with a purple edge. The Chevron logo/name and "Keep your Neighborhood Clean ♻" are printed on both ends, while Davey's name and the Chevron Cars logo are on the front edge. Behind him is a printed panel with an image of the main office/trailer for Ed's Driving School, parked in a lot with a large post sign and surrounded by chain link fence. "Safety tested and recommended for children age 3 and over" is printed near the lower left corner of the panel. The back panel has moved the view to across the lot, with the trailer in the background and Davey in the foreground. A smaller traffic control sign next to Davey lists this toy's features. The bottom of the package has a photo of Davey with callouts for his moving eyes, second steering wheel, stop sign, opening doors, reflective mirrors, and three traffic cones, along with the usual marketing paragraph: "Davey Driver's favorite way to drive is in reverse. He simply loves the feeling of going backwards. 'It's really cool!' As back-up instructor at Ed's Driving school, Davey claims he's about the best and most loyal car on the road...and he can back it up!" The customer feedback card and "Owner's Manual" are packed inside the blister under Davey.

Davey has the usual well-cast ABS body, this time in grass green with black mirrors. Reflective silver stickers are used for the mirror glass, and a Techron sticker is mounted as the license plate under the trunk lid. The tires are treaded vinyl with Chevron/Techron cast on the sidewalls over silver 8-hole wheels. His parking lights and lower rear lights are orange, remaining taillights are red, his roof topper is yellow with black text and red lights, and his mouth is black with white teeth. The yellow paint on the topper is a bit light towards the bottom, but otherwise the extra paint apps are nicely applied. His eyes are blue with peach eyelids. Davey's interior is a very pale blue with detailed front and rear seat belts and the advertised dual steering wheels. In a nice attention to detail, the dashboard is asymmetrical: there's a raised section over the left wheel as if that's where the instrument cluster would be, while the right wheel is mounted near a flat section of dash as if that's where the glove box should be. It's a totally unnecessary detail that shows how the designers were actually trying to make this "accurate." The chassis is the usual name and series logo plate, with the designation "LE1" for the Limited Edition series.

Davey has opening doors and moving eyes. The hinges work nicely and the doors snap securely into their "closed" positions. The eyes are activated by pushing down on his hood and rolling him forward, which makes his eyes move left to right. He also comes with some school supplies: three traffic cones and a stop sign. The cones are soft orange plastic, while the sign is a more rigid silver plastic with the sign face made from a sticker.

We got a few more views of Davey than we did Danni, only because he spent the entire commercial pratfalling while she was talking. The extra views reinforce that the overall casting is very accurate to the Drivers' screen appearance, with the only really obvious change being the lack of any license plate in the ad. He measures approximately 5½" (140mm) long, 3½" (90mm) wide, and 3" (75mm) tall.

Davey was a safe choice for the first Limited Edition Car: the ad showed that he should look (almost) identical to Danni so there was an in-universe explanation for the use of recolors on this mold, and his extra accessories helped justify the higher price point. That cost has been mitigated by the years since his release, with Davey available for pretty much the same price as any other car in the series. Not necessarily worth getting on his own (unless you prefer green), but a good companion piece to Danni and so is mildly recommended