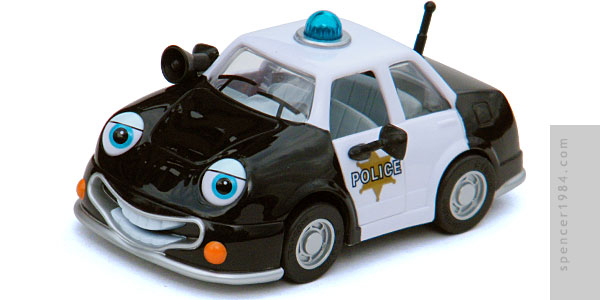 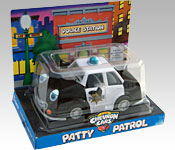 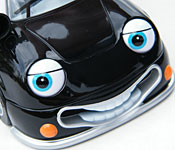 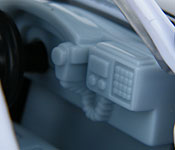 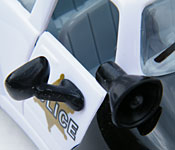 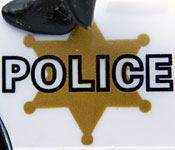 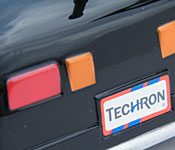 Although the Chevron cars had their start in 1996, the series really got into its groove with the June 1997 release of Patty Patrol and Tyler Taxi. These two were the first to be packaged in the blister cards that would become a mainstay of the series.

While the first few cars had art featuring the character in a themed setting (Freddy near a muddy trail, Tony in a service station, etc.), This new series uses the toy and a printed backdrop to create the same effect. Patty Patrol is sitting on a base approximately 7" (180mm) x 4.5" (115mm), with a printed road surface. This base is approximately ¾" (18mm) thick with a blue edge. The Chevron logo/name and "Keep your Neighborhood Clean ♻" are printed on both ends, while Patty's name and the Chevron Cars logo are on the front edge. Behind Patty is a printed panel with an evening image of a Police Station (at the corners of Law and Order) and part of a city block. "Safety tested and recommended for children ages 3 and over" is printed on a sign face on the sidewalk. The back panel has the reverse view of the Police Station, complete with a garage bay on the ground floor. The building next to the Police Station has a billboard advertising Chevron with Techron, and Tyler Taxi is on the street between the buildings. Patty is in the foreground of the image, in front of a sign listing her toy's features and a random stray cat. The bottom of the package has a photo of Patty with callouts for her moving eyes, opening doors, and reflective mirrors, along with the typical marketing paragraph. The paragraph is written in the vein of the Miranda warning: "You have the right to a Patty Patrol Car. Anything you play can and will be fun and exciting. You have the right to an imaginative adventure. If you do not have one, one will be provided with each Chevron Car." The feedback card and "Owner's Manual" are packed inside the blister between Patty and the road surface.

Patty is the first Chevron Car to have more than just "effects" paint apps: she is cast entirely in white plastic, with black painted on her front and rear sections. The paint and plastic are nice & glossy, though there are a few minor imperfections in the paint on her hood. The sideview mirrors, bullhorn/siren, and rear antenna are cast in a slightly soft black plastic with reflective silver stickers acting as mirror glass. Tires are the typical vinyl slicks with Chevron/Techron cast on the sidewalls. The gumball light on the roof is cast in transparent blue with internal facets. Her bumpers, lips, wheels, and roof light bezel are painted silver, her parking lights and inner rear lights are orange, her outer rear lights are red, and her teeth are painted white. There are some fuzzy edges and bleed issues on close examination, but the overall effect is very good. "Police" and a gold six-pointed Sheriff star are printed on the front doors, and look nice and sharp. Her eyes are medium blue with black detailing and lighter blue eyelids, also very cleanly printed. Patty's interior is a light gray with some very nice detailing, including four sets of seat belts and a police radio (complete with microphone and coiled cord) on the right side of the dashboard. The steering wheel is cast in black, and the black mirror mounts poking through the doors make reasonable interior door handles (this last was likely unintentional, but it's a neat effect nonetheless). There is no engine, and the chassis is a simple plate with her name and series logo cast in.

Patty has opening doors and moving eyes. The doors are simple hinges that function smoothly. The eyes are activated by pushing down on her hood and rolling her forward. Unlike previous cars, these eyes appear to be spring loaded: rolling Patty moves the eyes slowly to her right, but after reaching a certain point (or releasing the pressure on the front axle) the eyes snap back to the left. The effect isn't quite as smooth as the simple geared eyes of Tony, but it does create the effect of a Police Officer suddenly focusing their attention where it is needed.

Police cars are always cool, and having one as a spokesperson for Techron seems very appropriate (few cars see the type of hard duty they do—even taxis and buses seldom require the hard accelerations cop cars need to perform). The classic black & white with the blue roof light is fantastic, and the few paint issues in no way take away from the overall package. Recommended.