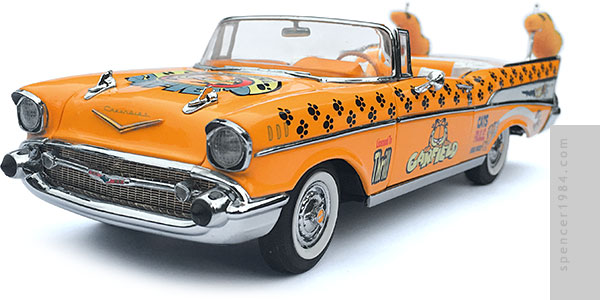 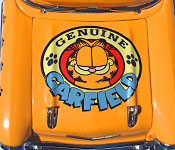 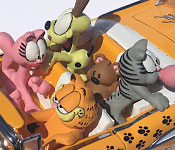 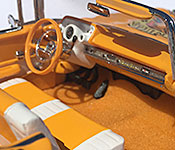 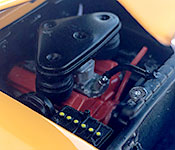 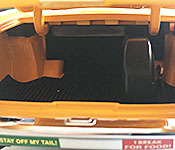 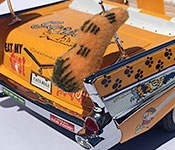 Throughout the 1990s, The Danbury Mint had partnered with Paws, Inc. to produce a series of collectibles including plates, statues, and other decorative items. With the diecast market still riding the economic and collectors' boom of the time, Danbury also released two 1/24 scale "character cars" under the Garfield license. The first of those was the Garfield Parade Car, a repaint of their '57 Chevrolet diecast with a new paint job, new accessories, and a set of five cold cast resin figures that could be placed in and around the car.

This is a slight variation to the usual DM packaging, with the outer box having a slightly more festive look with streamers and the "Garfield Parade Car" written in a looser comic font. The model is secured between two styrofoam pieces with tissue paper strategically placed to protect corners and edges. A Title certificate and unpacking/care instructions are folded and placed on the top tray, and the figures are placed in a double clear plastic tray at the "open here" end of the box with each figure getting its own pocket. Foam blocks and a small bit of tissue around Nermal's balloon help keep these safe.

This replica has a primarily metal body that looks great with clean panels and tight seams. The immense trim is all replicated with chrome plated plastic, and includes the bumpers, grille bar, hood trim, headlight bezels, side trim, window surrounds, mirror, door handles, door locks, rocker panels, and fin edging. Everything fits tight not only to the body, but to other components: the split between the hood edge and the rest of the grille surround is nicely spaced, the wing windows fit tight to the windshield, and the multi-part fin pieces all fit together beautifully. The grille, "V" emblems, and license plate frame are gold plastic; the headlights, parking lights, reverse lights, and windows are clear plastic; and the taillights are transparent red plastic. These all fit together just as good as the chrome parts. A pair of cat tails are fixed to the dual rear antennas, and are made from hard plastic with orange and black flocking to give them the appropriate fuzzy texture.

The excellent work continues with the paint, which is a bright high-gloss orange with flat white for the ribbed fin inserts. The printed graphics are a combination of stock (grille emblem, hood and trunk scripts, fender gills) and custom (everything else). On the hood is a large "Genuine Garfield" seal with a full color portrait of the titular cat; black paw prints march down both sides above the main chrome spear; another named portrait is on each door; scratched-out panels are on each fin insert; and one "lounging" portrait with name is on the top of the trunk lid. There are also several mottos scattered across the body: "Licensed to Thrill" behind the front wheels, "Cats Rule Dogs Drool" (with Garfield kicking Odie) on the lower rear fenders, "Eat My Dust" and "Speed Demon" on the back of the trunk lid, "Cats Rule" is on the license plate, and "Stay Off My Tail!" and "I Break [sic] for Food" are made to look like bumper stickers. While the result of so many objects, fonts, and colors is extremely busy, they do all fit the theme and are flawlessly applied in both placement and registration.

The interior continues the color theme. The dash and side panels are orange with white and chrome accents, the seats are white with orange panels and white buttons, and the floor is finished with is orange flocking. The top boot is white, and the steering wheel is orange with a chrome horn ring and levers. To keep things from being too "one note," black has been painted on the radio and window crank knobs, red and green was used for the lights in the instrument cluster, and separate black pedals are located in the driver's footwell. The gauge faces, steering wheel emblem, and radio and clock faces are printed with an extraordinary attention to detail.

Under the hood is a faithful representation of Chevrolet's penultimate performance engine for 1957, the 283 dual carb. From the batwing air cleaner to the separate generator bracket, the attention to detail here matches the fine work seen elsewhere. About the only thing missing is the ignition wiring, though with the distributor buried behind the air cleaner it's not much of a loss. Other details like the separate battery, heater fan, horns, and radiator cap all add to the appearance. The engine is painted the appropriate red, with metallic colors used to pick out the exhaust and intake manifolds, oil fill, and carburetors. The air cleaner, radiator hose, belt assembly, fan, and transmission are all black. The bay, underside of the hood, radiator, bulkhead, and other accessories are also black, with yellow caps on the battery.

Chassis detailing is good, with separate parts for the exhaust, suspension, and driveline, but everything is painted a uniform black so much of this good work disappears. Considering that this particular diecast has a stronger-than-usual focus on the topside details, I can't really fault them for taking a break down here. The wheels are tires are well detailed, though. Vinyl tires use plastic inserts for the whitewalls to give them a nice sharp edge, and the hubcaps have separate spinners with orange centers and detailed crests. Inside the trunk is a spare tire, jack, and ribbed rubber floor mat, all black in the otherwise orange space.

The hood, trunk, and doors open, and while the hinges for all of them work well the trunk lid is impaired somewhat by the cat tails. They're flexible enough to force the trunk to fully open, but some scuffing is possible. It also has posable front wheels attached to the steering wheel, which are made to return to center when released. Finally, five cold cast resin figures are included: Garfield, Arleen, Odie, Pooky, and Nermal. All are made to fit in the car, with their "official" placements (as per the brochure photo) being: driver, passenger, right rear, center rear, and left rear, respectively. Garfield is really the only one with an absolute position, though, thanks to his cocked elbow and right hand on the steering wheel. The other four are in more generic seated or standing poses, and can be placed in several locations that still look good. The figures are cleanly cast and sharply painted, though some tiny hairline cracks have started to appear in the white paint after nearly two decades.

This is not based on an existing design, but is instead a "character car" that uses an existing tooling with a new paint job to evoke a persona. As a 1957 Chevrolet Bel Air convertible, this is an outstanding replica. Details are exceptional, scaling is dead-on, and there are a ton of great features big and small.

This was made when Danbury as at the top of their game: the market was still solid, and some fun asides could be done with all the seriousness and attention to detail of a standard high-end replica. The '57 Chevy convertible is a nice choice to go with the character thanks to its appearance in Garfield in Paradise, though that was a stock red Bel Air rather than the gussied-up parade car we see here. Whether you like the look or not is entirely subjective, but the quality here is irrefutable.