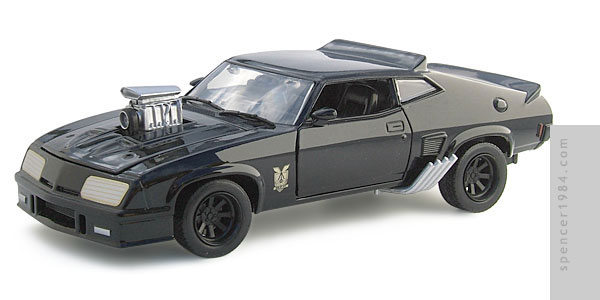 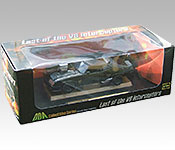 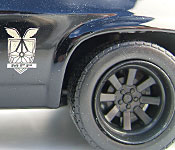 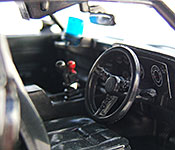 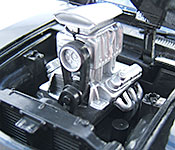 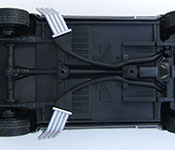 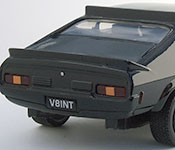 In 1979 Mad Max, a low-budget action film directed by George Miller hit the screens. Inspired by the oil crisis of the early 1970s, as well as Miller's experiences as a doctor working in a Sydney emergency room treating accident victims, it was set in a dystopic future where law and order have started to break down and gangs rule the energy-starved roads. The movie went on to become one of the highest-grossing Australian films of all time, spawning three sequels and serving as inspiration for countless other stories. One of the most iconic images from that film was the black-on-black V8 Interceptor (originally referred to as a "Pursuit Special"), a custom built high-speed Police vehicle that was a perfect expression of post-apocalyptic road rage. Modified versions of the car would appear in The Road Warrior and Fury Road, along with various tie-ins released over the years. Despite its popularity, though, replicas of it have been rare. Aside from a few rare resin kits, models of the black-on-black only started appearing in 2002. DDA Collectibles released this replica about five years later under the "Aussie Road Legends" banner.

DDA used a large window box, measuring 14" (356mm) x 6.25" (159mm) x 4.75" (120mm), with a dark background. "Last of the V8 Interceptors" is written across the top panel in silver text over an orange explosion. The phrase is repeated on the front panel under the window, and is flanked by the DDA logo and scale. Both end flaps use the same silver text/orange fireball as the top of the box, though they have been rearranged and a photo of the 1:1 car and the DDA logo/scale have been added. The underside of the box has the age restriction (twice), DDA contact information, and bar code on a plain white background. The back panel has fiery columns at each end, with more photos of the 1:1 on the far left (including interior and rear views). The DDA logo and scale are repeated near the bottom, and the rest of the panel is taken up with a badly edited description of the Interceptor from LastInterceptor.com mashed together with a few bits from MadMaxMovie.com. For example:

LastInterceptor.com: Modifications include a nosecone designed by Peter Arcadipane, sometimes called a "Monza" nosecone although it has nothing to do with the Chevy Monza. Then upon close inspection, you will notice that the trunk spoiler is not the same as the XC Cobra spoiler...The remaining body kit was entirely custom made, no "off-the-shelf" parts were used. The roof spoiler and wheel arch flares were hand made items blended into the body, and so they were never actually available as consumer items.

DDA Collectibles Box Art: Front Modifications include a nosecone called a "Monza". Trunk Spoiler is not the same as the Cobra spoiler. Remaining body kit was entirely custom made, not "off the shelf" parts were used. The roof spoiler and wheel arch flares were hand made items which were moulded into the body, and so they were never actually available as consumer items.

The car is held to a sturdy plastic tray with screws, and plastic bands keep the doors and hood closed. A large three-walled cardboard backdrop with the same fiery orange is held behind the car. The center of the base (under the car) is painted gold, and a sticker is applied to the front of the tray that says "V8 Interceptor/Limited Edition 1875/6000." In all of this, there are no logos or mention of Mad Max or Ford - like the aforementioned garage kits, this is not an officially licensed replica.

I first have to mention the weight of this thing: at over 1lb (485g), it feels practically monolithic. The casting work is generally competent, with clean lines and no obvious flaws. There are even some really nice touches, like the detailed fender vents and separate windshield wipers. But there have been a few shortcuts, too: the headlights, marker lights, spoilers, fuel cap, and bumpers are all cast as part of the body. The spoilers particularly suffer from this, lacking the proper undercuts from the 1:1 car. The windshield also has a pair of ugly mounting tabs visible along the top edge, though the side and rear windows look great. The tail lights are transparent red with orange paint for the signals. The wheels are cast in black plastic with vinyl tires. The tires lack sidewall detail, but have the correct tread pattern for the BF Goodrichs used in the film. The paint is entirely gloss black, nice but not outstanding - there are a few minor spots of dust, and a blister on the back side of the rear spoiler. The gold MFP logos on the sides are beautifully captured, with sharp printing and nice detailing. The rear plate is a simple "V8INT" printed in silver. Silver is also used for the trunk lock, zoomies, headlight covers, and front marker lights. The headlight covers have additional gold louvers printed on them, cleanly printed but slightly off-mark. The rear side markers are painted red.

The engine has been simplified, with basic detailing from the heads up and only a solid block below that. To try to capture the look of the movie car, the blower sits on a high rise manifold with a two-stage drive belt arrangement. The strut towers and radiator bulkhead are nicely done, but some basic details like tensioners, an alternator, or a water pump are missing. There is also a big screw head visible on the right side of the intake manifold. Better to leave the hood closed. The interior is somewhat better, with separate seats, an overhead console, and separate shift lever. The dashboard has some very nice detailing for the defroster vents, door panels, and central controls, but the gauge cluster is a single sticker on a flat panel in front of the driver. The overhead console is also a sticker, but thanks to its location is far less obvious. The only paint apps are on the supercharger cutoff and police beacon, and both are good but not great. There is bleed around the base of the cutoff switch and a tiny smear of black on the side of the beacon. The chassis is fantastic if viewed straight-on, without any text cast in place. The suspension does suffer a little bit when viewed from an angle, and would have benefitted from a couple of extra assemblies to lighten things up - especially the rear springs. The only paint is on the zoomies.

The hood and both doors open & close on nice, stiff joints. The seams are some of the best I've seen on a diecast, especially the way the hood fits around the fenders and nose. There is a tiny bit of play in the engine, to make sure nothing gets broken when opening the hood. The front wheels can be posed and are tied to the steering wheel, but don't move very far.

For the most part, this is very accurate - the nose looks good, the flares and spoilers are all in place, and the interior upgrades are all in place. But there are also a few problems: the blower sits high, the zoomies are a bit long, and the interior is the wrong color for the first movie. The Sunraysia wheels look a little off as well, and are wrapped with four tires that are all the same size (the restored Interceptor rides on 14" fronts and 15" rears). Finally, it's missing all of the satin black areas on the hood and sides.

Though it has some problems in the detail work, this is still a very cool replica of one of cinema's all-time greatest cars. I managed to snag one with a damaged box at less than half its MSRP, and at that price it was a no-brainer. Even if you end up paying full price for it, the rarity of a first movie car makes this pretty attractive. Recommended.