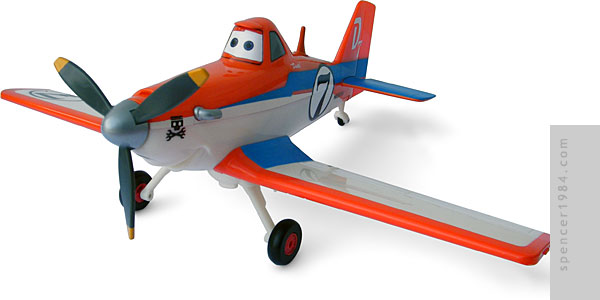 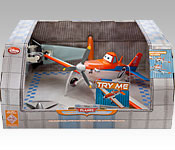 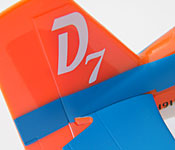 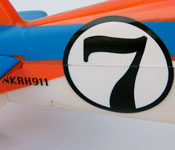 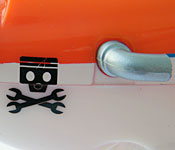 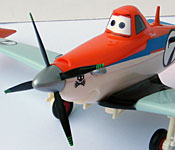 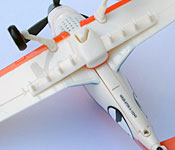 The concept for Planes came from John Lasseter, director of Cars and Cars 2 and chief creative officer of both Pixar and Walt Disney Animation Studios. While Planes was released with only the "Disney" name attached, it is set in the same universe as Cars and uses many of the same concepts. For this film, Dusty Crophopper is a simple crop duster who dreams of becoming something greater. His dreams take him to the Wings Across the World race, where he is forced to overcome some tough competition as well as his own physical and mental limitations. As the movie progresses, Dusty's appearance changes to show his growth: first as a simple crop duster, then the addition of racing numbers, an updated paint scheme, a streamlined "turbo" look, and finally an honorary "Jolly Wrenches" paint scheme signifying the respect and self-confidence he earned.

The Disney Store Exclusive talking Planes series are all packed in a large open-topped box. It measures 15½" (39cm) x 14½" (36.5cm) x 7¼" (18.5cm), with truncated front and back top edges to create the rough appearance of an aircraft hangar. The outside is covered with square riveted plates: gray with blue-gray stripes on the front, bottom, and back, blue-gray on the ends, and gray/blue-gray checkered on the top. The front has the Disney Store logo, a matrix barcode to scan for a preview of the movie, the movie logo, character name, "Action Figure" in multiple languages, age restriction, and a callout box with "Transforming Action" and photos of Dusty with his optional parts. The back panel features a large image of Dusty in his pre-race configuration (black stripes, no numbers, ventral sprayer array). Around the image are callouts to several features in multiple languages, including "Speaks 15 Phrases," "Interchangeable Propeller and Wings," "Motion Activated Engine Revving Sounds," "3 Free-Spinning Wheels," and "Propeller Spins/Activated by bottom button." Below this are co-sells for the other three planes in the series: Echo, El Chupacabra, and Bravo. The legal info, barcode, and official Disney Store graphic are at the very bottom of the back panel. The left end has another large picture of Dusty in his pre-race configuration, the movie logo, and a wireframe profile of Dusty noting the "Modified Tail Fin" (which doesn't match any of the art or the toy - it only appeared near the end of the movie), and "Stainless Steal [sic]" prop cone. The right end has yet another image of pre-race Dusty and a Flight Card that lists his number (7), wingspan (44.5'), weight (3,799 lbs), and features (cropduster). The bottom of the box has the figure's sole attempt at instructions: how to change the battery. The inside of the box is simulated corrugated siding, with an arched window at both ends and a smooth "cement" floor with a worn blue checkerboard border. A "Try Me" standee is fed through the floor near the front right corner. Dusty is held on a clear plastic tray with a pair of plastic bands. Another clear tray is held over the end of his prop with a clear rubber band. His optional parts are stored behind plastic trays in the right rear corner: the wings are mounted to the walls, and the prop is on the floor.

Dusty is a fairly simple shape, but the casting has just enough details to keep it interesting. The flaps, ailerons, elevators, and rudder all have clean, straight edges, while the windows and mouth have a good organic look that matches the movie. His exhaust pipes, visor, elevators, and tail wheel are all separate pieces glued on. The antenna acts as his sound trigger. The propeller, wings, and sprayer are all removable parts so that he can be converted to "turbo" mode. These all fit very tightly, with the seams put along existing break lines. His standard propeller has three wide blades, while the racing prop has four thinner blades. The standard wings have fixed landing gear, while the racing wings have simulated retractable gear. For some reason, no effort was made to make the gear doors match the openings in the wings. The racing wings are also narrower than the standard wings, and feature stabilized tip tanks. Other than the antenna/trigger, all of the functional components are on the bottom: the speaker is right behind Dusty's mouth, followed by the master on/off/demo switch, the button to spin the propeller, and finally the battery cover just ahead of the tail wheel.

Good as the casting is, it's let down by the paint - or lack thereof. Dusty is cast entirely in plastic, and is cast in color wherever possible. Unfortunately, because he is light colored, this means that most of the fuselage is translucent. You can pretty easily make out some of the electronics in the lower half of the fuselage if the light is right. The top half is better in low light, but bright light causes wide tone variations based on how thick the plastic is (the rudder, for example, is fairly thin and appears much lighter than the tail). This also makes paint matching nearly impossible: the painted white just below the blue stripe is much brighter than the lower fuselage, and the orange under the tail, on the antenna, and on the visor is much more saturated than the orange plastic. The detail painting is a mixed bag: the eyes and windows are excellent, even including a fine, even weatherstripping around the edges. The Jolly Wrenches insignia on the nose is good, though there is a bit of a hiccup where is crosses the seam between upper and lower fuselage halves. The blue stripes look good on the tail, but have problems with alignment, fuzzy edges, and chips/scratches elsewhere. Both props have some nice painted detail. The standard wings have several issues with fuzzy edges and poor alignment on both the blue and orange areas, but the wing tip lights are clean and applied correctly. The racing wings have nice glossy black bases, a smooth gray finish, and generally good work on the tip tanks and lights. The rondels, "D7" on the tail, and "Dusty" on the sides are clean and sharp, but have several small dings as if there was dirt on the plastic when they were printed. The tail number (NKRH911) is printed cleanly, though I doubt he could get away with the size or choice of font in our world.

This is Dusty's real selling point. First, he says 15 things from the movie: "Oh yeah, I'm cool-o-matic," "Holy smokes," Woah, woah, woooaaah!," "This is Dusty Crophopper calling Propwash Junction," "'Sup?," "I'm Dusty; Dusty Crophopper," "Wow!," "Roger that," "Woah! look at this crowd!," "Touchdown, nicely done," "Crazy day today, huh?," "Yeah, check it out!," "Oh yeah!," "Woo!," and a short laugh. These run in order, and start with the same phrase every time you turn him on. Moving him or pushing the button to spin his prop will also activate his engine sounds. Continuous movement will repeat the engine revving sound, while leaving him alone will have the noise switch to an idling engine before turning off completely. He can also be switched from pre- to post-crash configurations by removing his sprayer and replacing his wings and propeller. The wings are *very* tight to the fuselage, and can be broken if force is applied in the wrong direction (especially the racing wings), so be careful swapping them out. The props hold firmly but can be removed without much difficulty. Note that they are keyed, so you have to line up the flat spot on the prop with the flat spot on the shaft.

Dusty looks very close to his screen appearance, from his overall shape to his expression. Despite the box art using his Propwash Junction appearance, the toy uses his look from around mid-movie. His Jolly Wrenches insignia should be a little smaller and lower, and the blue stripe should come all the way up to his prop, but these are relatively small details. The standard and racing propellers have their blades pitched in opposite directions, so while pushing the button spins his racing prop the correct direction, it spins the standard prop backwards (as if it was trying to push Dusty in reverse). Scaling is very questionable. As noted above, the box claims a wingspan of 44.5' (13.5m). This is close to the 48' (14.6m) wingspan of the Air Tractor AT-502 Dusty was loosely based on. But according to The Disney Wiki, Dusty's wingspan should be 23' (7m). This matches the film showing Dusty as slightly smaller than El Chupacabra, a Gee Bee with a 25' (7.6m) wing span. This toy has a wingspan of 15" (38cm), which means he is anywhere from 1/36 scale to 1/18 scale. Putting Dusty next to Mattel's 1/24 scale Lightning McQueen, the scale between them looks pretty close to the scaling between aircraft and automobiles shown in Planes...so that's what I'm going with.

Definitely not for the youngest Planes fans: the wings seem too fragile and the prop seems too picky for anyone without a fair amount of patience and/or dexterity. It's also not a typical collector item thanks to the translucent plastic and questionable paint. But I do appreciate that none of the gimmicks intrude on what is an overall decent sculpt, so I can display it with my other TV/movie vehicles. The $25 price tag is a little high, but considering the rarity of large-scale aircraft combined with the fact that it's a store exclusive, I don't feel like it's a rip-off. I managed to pick this up during a 30% off sale, which made it a lot more attractive. Definitely recommended if you can do the same, mildly so at full price.