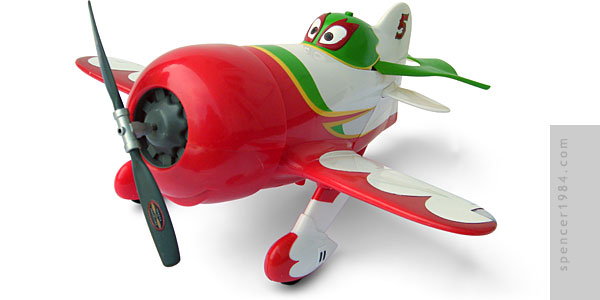 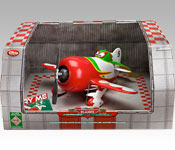 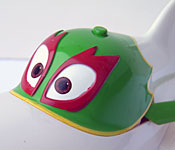 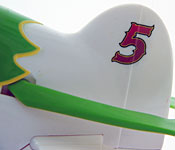 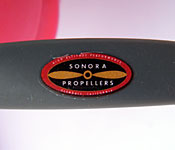 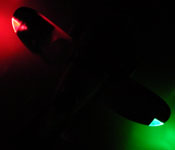 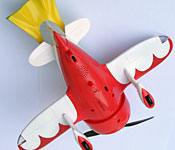 The concept for Planes came from John Lasseter, director of Cars and Cars 2 and chief creative officer of both Pixar and Walt Disney Animation Studios. While Planes was released with only the "Disney" name attached, it is set in the same universe as Cars and uses many of the same concepts. For this film, Dusty Crophopper is a simple crop duster who dreams of becoming something greater. His dreams take him to the Wings Across the World race, where he meets El Chupacabra—a flamboyant masked racer from Mexico who befriends Dusty and helps him along the way. In return, Dusty helps El Chupacabra express himself without the bravado, winning the heart of fellow racer Rochelle.

The Disney Store Exclusive talking Planes series are all packed in a large open-topped box. It measures 15½" (39cm) x 14½" (36.5cm) x 7¼" (18.5cm), with truncated front and back top edges to create the rough appearance of an aircraft hangar. The outside is covered with square riveted plates: gray with red stripes on the front, bottom, and back; green on the ends; and gray/red checkered on the top. The front has the Disney Store logo, a matrix barcode to scan for a preview of the movie, the movie logo, character name, "Action Figure" in multiple languages, and age restriction. The back panel features a large image of El Chupacabra. Around the image are callouts to several features in multiple languages, including "Speaks 15 Phrases," "LED Lights Activated by Top Button," "Motion Activated Engine Revving Sounds," "3 Free-Spinning Wheels," and "Spinning Propeller & Flapping Cape Activated by Bottom Button." Below this are co-sells for the other three planes in the series: Echo, Dusty Crophopper, and Bravo. The legal info, barcode, and official Disney Store graphic are at the very bottom of the back panel. The left end has another large picture of El Chupacabra, the movie logo, Mexican call out and offical seal, and a wireframe profile of El Chupacabra noting the "Flapping Cape" and "Lucha Libre Mask." The right end has yet another image of El Chupacabra and a Flight Card that lists his number (5), wingspan (23.6'), weight (2,480 lbs), and features (Lucha Libre Mask). The bottom of the box has a note about how to change the battery, but is otherwise a continuation of the front/back panel art. The inside of the box is simulated corrugated siding, with an arched window at both ends and a smooth "cement" floor with a worn red checkerboard border. A "Try Me" standee is fed through the floor near the front left corner. El Chupacabra is held on a clear plastic tray with a pair of plastic bands.

El Chupacabra is cast almost entirely in red plastic, with only a few details cast in other colors. These include the prop and engine (gray), wheels (black), main gear and tail (white), light/sound activation button (green), and navigation lights (clear). These components fit together reasonably well, though there are some misses: the upper engine cowl is slightly wider than the lower, and the diagonal break between the wing mounts and elevators is just plain ugly. The second fuselage seam on the tail (between the white and red plastic) is nicely hidden by the cape. The cape is cast in green vinyl, with the underside painted yellow. Paint is also used for the center of the propeller, mouth, red and black areas on the main gear, white areas on the main fuselage, mask, eyes, numbers, and stripes. The limited use of white plastic here makes El Chupacabra look a lot more solid than Dusty, but the paint still isn't really great. There are a lot of scratches, dust spots, overspray, and rough edges. There are a few bright spots: the Sonora Propellers logos on the prop blades are nice & sharp, and you can even read the tiny "High Altitude Performance/Glendale, California" text written around the edge of the logos. The racing number on the tail is also done well, with clean edges and good registration. The battery box, on/off/demo switch, button to spin the propeller, and speaker are all located on the underside of the fuselage, and other than the prop button are kept close to the surface to keep things clean.

Like his case mates, El Chupacabra says 15 things from the movie: "Atención señores y señoritas," "Excuse me, how much does the snow plow weigh?," "Enough to break the ice," "Ha, ha, ha, ha—número uno!," "Hello, I am El Chupacabra," "I am in your debt, compadre," "I will see you in the skies, amigo," "If ever you need me, I shall be there," "The hero of the people has arrived!," "Very well, you leave me no choice!," "I—I swish my cape at you!," "We will have many adventures, you and I," "Why do you not cheer?," "You've never heard of the great El Chupacabra!?," and "Joke? You make joke!?" These run in order, and start with the same phrase every time you turn him on. Pushing the button on head also activates his wing lights: red for port, green for starboard. Moving him or pushing the button to spin his prop will also activate his engine sounds. Continuous movement will repeat the engine revving sound, while leaving him alone will have the noise switch to an idling engine before turning off completely. Pushing the button repeatedly will also make his cape wave up and down.

Unlike Dusty, El Chupacabra is based entirely on an actual aircraft: the Gee Bee Model R. Like the vehicles in the Cars universe, the proportions have been changed but the overall shape and many of the details remain correct. In El Chupacabra's case, he has a stouter body, smaller engine opening, and of course his face and cape. All of these are captured here, and the paint scheme looks almost perfect. He even has a simplified version of the Pratt & Whitney R-1340 inside the cowling. The only things missing are the wing and gear support wires (no surprise), and his main gear legs should be further from the centerline (they should line up with the peaks of the inboard scallops painted on the bottoms of his wings). The propeller looks like it needs to be seated further on its shaft, but on my copy it doesn't budge. It also rotates the wrong way: pushing the button spins it as if it were pushing El Chupacabra backwards. The wing lights are a cool idea, but don't match the movie, the original Gee Bee, or etablished navigation light rules. Depending on whether you want to go with the original Gee Bee's spec of a 25' (7.6m) wingspan, the box art's spec of 23.6' (7.2m), or the Disney wikia spec of a 22.8'(6.95m) wingspan, El Chupacabra is between 1/23 and 1/21 scale. He looks good next to Dusty and fits in pretty well with 1/24 scale Cars characters.

El Chupacabra is arguably better than Dusty: the more opaque plastic is much better, and everything looks and feels less "cheap" here. I also prefer the light-up feature to Dusty's fragile and picky parts swapping. He's still far from perfect, though: a couple of the joints really needed to be refined more, and the paint is just as bad as it was on Dusty. Still, for $25 you get a big, fun character that should be able to handle plenty of play or could fit in with a larger-scale Disney/Pixar collection. Mildy recommended.