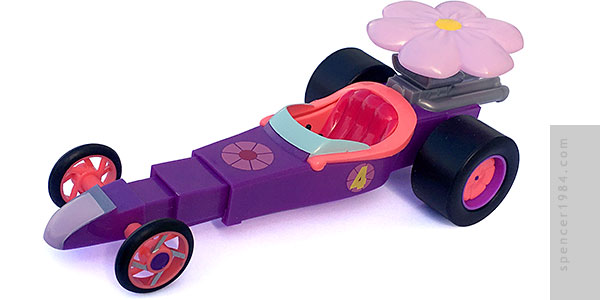 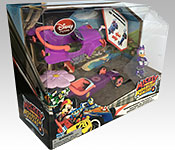 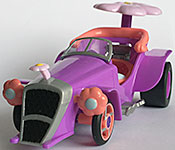 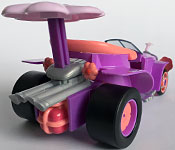 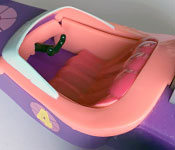 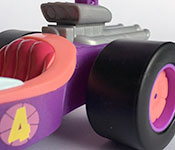 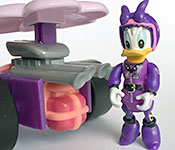 After ten years on the air, Mickey Mouse Clubhouse was replaced in January 2017 with an all-new series aimed at preschoolers, Mickey and the Roadster Racers. The new series follows the "Sensational Six"—Mickey, Daisy, Goofy, Donald, Daisy, and Pluto—as they race around the world. Each driver has a unique vehicle that converts from a street car to an open-top racer, with Daisy driving the purple "Snapdragon."

The Roadster Racers cars are packed in a large window box, measuring 11" (28cm) x 4¾" (12cm) x 8¼" (21cm). While it's massively oversized for the car, it does allow the contents to be easily viewed through the big window. The front of the box also has a portrait of Mickey, Donald, and Goofy in their respective rides racing along a course that wraps around the left end panel. The series title and "Transforming Pullback Racer" is printed in the lower right corner. A Disney Store exclusive sticker is affixed near the top left corner. Both end flaps repeat the title, and while the contents can be removed either way it's far easier to get them out of the left side. The top and bottom are blank blue and black, respectively, and the back panel has all of the legal info below three photos that serve as the instructions for Daisy's car (see "Features/Accessories" below). Daisy and her car's parts are held to a folded tray that easily slides out of the box. Daisy and the car shell are held in place with plastic zip ties, and the racer is held with a combination of plastic bands and a wire twist-tie. To save yourself time and frustration, have a set of side cutters on hand to go through all four in short order. A set of cutouts are made for the wheels to lock into the tray, but the twist ties ended up holding the car off-mark.

Not quite as involved as Donald's car, but still a much more complex design than many of the other racers. The main body, grille, side pipes, and retracted roof are rugged ABS, while the flower details and steering wheel are flexible vinyl. Paint is generally pretty good, with only a little trouble around the edge of the grille. The way the engine sticks out the back is unfortunate...not nearly as ridiculous as what's going on with Goofy's ride, but still a bit lazy looking. The roadster also suffers a bit from having the racer's wheels fully visible, since they're clearly a set of drag slicks and frontrunners, rather than big & little hot rod tires.

The racer is almost excellent. As noted above, the tires are ideally suited for a rail dragster, the "reconfigured" cockpit is nicely rendered with a separate "yoke" type steering wheel, and the way the rear flower drops to become a spoiler works better than one might expect. The purple is just a half a shade darker than the roadster body, with a faint metalflake finish that looks good. It's ABS construction feels solid, while the vinyl flower should be resilient to most play damage. Even the rear-mounted engine looks good, an acceptable tradeoff for it being so intrusive in roadster mode. The only real problem is the way the nose telescopes out from the main body. The plastic here is very thick to guard against damage, but as a result the way the body "steps" just looks bad. It's similar to the concessions made by other cars in the series, but with everything else done relatively well it sticks out more here than it would on an overall worse design.

The whole point of this series is the "transforming car" gimmick, which is pretty simple here. From roadster mode, simply pull the front wheels down to remove the racer, pull the front end out and push the flower down.

The toy also features a pull-back motor, which works well in either mode.

Finally, a Daisy Duck figure is included. She's dressed in her purple racing uniform, and suffers from the same paint and fit issues that have plagued this entire series. Daisy also has the unfortunate achievement of being the only figure that can't stand up on their own, thanks to a wonky hip joint that sticks in a position useless for sitting or standing.

The roadster took the hit in the accuracy department, with the clearly visible wheels, engine, and drag chute from its racer mode. If the dragster could extend a bit more or if it didn't have the stepped sides it would be a fantastic match to the animation model. In roadster form the car is approximately 3½" (9cm) wide and 5¾" (14.5cm) long; in racer mode it's 3½" (9cm) x 7¾" (19.5cm).

One of the strongest racers of the series, with a slightly comprimised roadster mode and the usual "meh" figure. Mildly recommended.