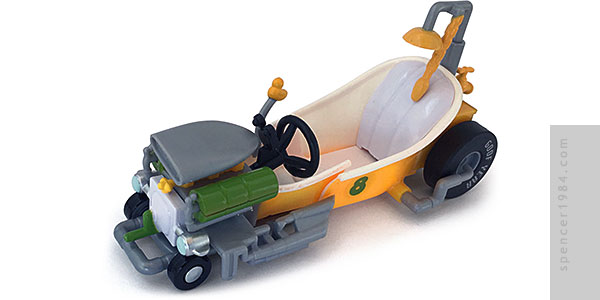 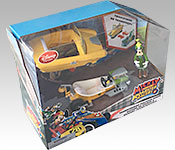 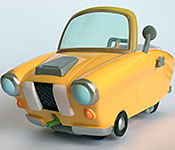 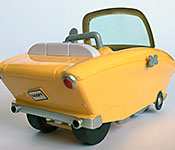 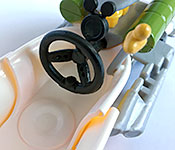 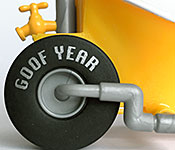 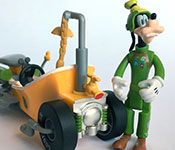 After ten years on the air, Mickey Mouse Clubhouse was replaced in January 2017 with an all-new series aimed at preschoolers, Mickey and the Roadster Racers. The new series follows the "Sensational Six"—Mickey, Minnie, Goofy, Donald, Daisy, and Pluto—as they race around the world. Each driver has a unique vehicle that converts from a street car to an open-top racer, with Goofy driving the yellow "Turbo Tubster."

The Roadster Racers cars are packed in a large window box, measuring 11" (28cm) x 4¾" (12cm) x 8¼" (21cm). While it's massively oversized for the car, it does allow the contents to be easily viewed through the big window. The front of the box also has a portrait of Mickey, Donald, and Goofy in their respective rides racing along a course that wraps around the left end panel. The series title and "Transforming Pullback Racer" is printed in the lower right corner. A Disney Store exclusive sticker is affixed near the top left corner. Both end flaps repeat the title, and while the contents can be removed either way it's far easier to get them out of the left side. The top and bottom are blank blue and black, respectively, and the back panel has all of the legal info below three photos that serve as the instructions for Goofy's car (see "Features/Accessories" below). Goofy and his car's parts are held to a folded tray that easily slides out of the box. Goofy, the car shell, and the racer are all held in place with plastic zip ties. To save yourself time and frustration, have a set of side cutters on hand to go through all four in short order.

Goofy's Nash-inspired roadster uses the same ABS construction as the other cars in the series, and while the concept and tooling seem fine, the execution is a mess. Substantial parting lines at all four corners, a wide assembly seam down both sides (which does not appear to be lined up correctly, since the door lines are stepped), ugly front wheels that don't come anywhere near the ground, and glue smears under both door handles. The paint does nothing to help, with smears around the right headlight, scuffs along the right side, and a horribly color-mismatched windshield frame with gold trim (the glass and frame are also scuffed). Even the paint that they got right looks halfhearted, with the bumpers only partially covered and the white grille teeth failing to cover the yellow plastic beneath. The sideview mirror is a soft vinyl, but the windshield has the same potential fragility as Mickey's roadster. It's also worth noting that the shower head at the back of the racer doesn't actually stow away in roadster mode: it just gets a little shorter and swivels off to the side, meaning there's a big hole in the false seat. The box art conveniently skips over this flaw by never showing the toy in roadster mode, so you're left on your own as to how to make it look the least intrusive

Sadly, the main car is no better, and may actually be worse. The sliding bathtub sides simply don't look right, any of the more complex assemblies (such as the crank starter or the exhaust pipes) have been simplified to the point of being nearly unrecognizable, the shifter, shower head and pull chain look like they came from a cheap knock-off toy, and the engine is so poorly assembled that the intake scoop is on crooked and cannot be fixed without breaking and re-gluing it. The steering wheel/gauge cluster is a single piece of soft vinyl...good from a safety standpoint, but not much better looking than the shifter or shower head. The paint is likewise abysmal, with poor color matching between the whites (making the car look constantly dirty), bad coverage with lots of bleed through, and poor alignment of colors to structures. It's really just lazy work all around.

The whole point of this series is the "transforming car" gimmick. For Goofy's car, you'll need to decide how best to stow the shower head when putting it into roadster mode (I found it looked best with the head off to the right and the pull chain tucked between the roadster and racer seats, but it's not the easiest look to accomplish). Depending on what you did here, you may need to swivel it out of the way before separating the outer shell, which otherwise pulls straight off. The car extends by pulling the front and rear axles away from each other, then the front bumper extends further by pulling it out from under the front wheels. The shower head extends and swivels 360°; officially it should be left over the seat, but since the chain hits the seat back you may want to go with another look.

Finally, a Goofy figure is included, dressed in a green racing suit accented with his trademark hat, gloves, and brown shoes. The big feet make it tricky to get him in the car past the steering wheel, so be careful not to break anything. As with the other figures in the series Goofy looks a bit rough (paint chips on his left eye, a really loose neck joint, etc.), but for once the character matches the car.

There's a passing resemblance to the Turbo Tubster, but all of the nifty pluming and detailing has been eliminated to keep this toy safe and sturdy. Given the target audience, and the fact that this was designed by Disney, for Disney, to be sold at Disney stores, you'd think they would have redesigned either the toy or the CG model so they could have looked more like each other. In roadster form the car is approximately 3¼" (8cm) wide and 5¾" (14.5cm) long; in racer mode it's 2¼" (6cm) x 5¾" (14.5cm).

Despite his popularity, Goofy had a pretty rocky history. Since his debut in 1932, his name changed from Dippy Dawg to George Geef to G. G. Geef to James Boyd to Goofy Goof to Goofus D. Dawg. Legend has it that Walt Disney hated the Goofy cartoons and would have eliminated them had they not been a source of make-work for his animators. In short, Goofy never got any respect...a trend that continues with this half-hearted mess of a toy.