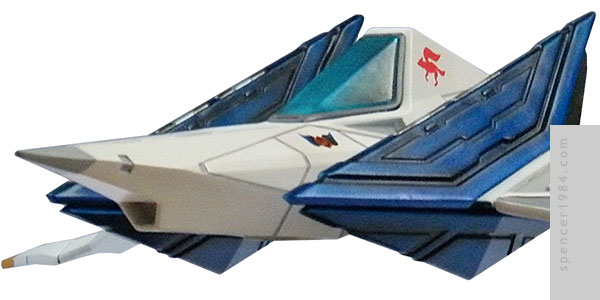 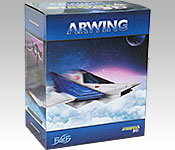 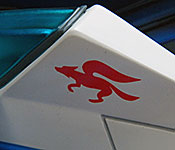 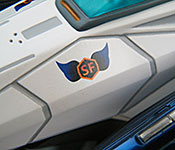 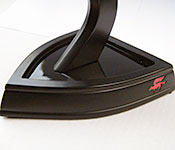 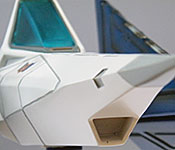 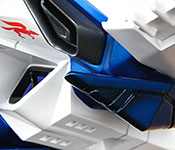 In 1993, Star Fox became the first three-dimensional game for the North American Super Nintendo Entertainment System. Polygon-based 3D graphics were nearly unheard of in home consoles at the time, but they managed to pull it off on the 16-bit SNES with some help from the Super FX coprocessor built into the game cartridge. Those graphics are primitive by modern standards, but Star Fox helped usher in the era of true 3D gaming (coming out months ahead of the groundbreaking DOOM). Four years later, Star Fox 64 was released on the Nintendo 64, a reboot of the franchise that has continued through 2016's Star Fox Zero. With a much more powerful computer at their disposal, Star Fox 64 featured somewhat redesigned Arwings. This updated look became the subject of First 4 Figures' Arwing statue.

The Arwing is packaged in a large (14½" (37cm) x 9¼" (23.5cm) x 17½" (44.5cm)) cardboard box. A large stylized photo of the craft flying through the upper atmosphere is on the front panel, with "Arwing" above it and the First 4 Figures and Star Fox 64 3D logos beneath is. The side panels have various beauty shots of the statue: nose and canopy on one, and mounted on the base on the other. The back panel has a massive text blurb under another large "Arwing" title:

Andross and his evil empire aim to take over the universe, starting with the Lylat system. Against these immeasurable odds, an elite fighter squadron known as Star Fox stands tall and fights to preserve galactic peace. This ragtag team of highly skilled pilots are among the very finest in the galaxy and their ship of choice when it comes to high-speed aerial combat is the Arwing. This state-of-the-art fighter boasts nimble maneuvering capabilities, powerful artillery, and incredible versatility. It can operate at peak performance both in the air and in the deepest vacuums of space and hit speeds in excess of mach 4. When this marvel of technology has a gifted pilot in the cockpit, it's a force to be reckoned with that can take down even the biggest enemy threats.

First 4 Figures is proud to present the first piece in a brand new line of collectibles: the Arwing! Initially made famous in the SNES game Star Fox, the Star Fox team's Arwings have seen many a battle throughout the Lylat system and are presented here as they appeared in the game Star Fox 64. The Arwing itself is suspended upon a base bearing the Star Fox insignias. Painted completely by hand and cast in high-quality polystone, the Arwing measures a total of 12 inches tall by 12 inches deep by 18 inches wide.

This debut release in our Star Fox line of statues is limited to 1000 pieces.

The bottom of the panel has another stylized photo of the craft, the individual edition number (077 on mine), and the requisite legal and contact info. The top panel has the "Arwing" and "Star Fox 64 3D logos repeated from the front panel, while the bottom is blank.

Inside the box is a massive foam clamshell taped around the seam and sealed with an "inspected by" sticker. A COA is slipped between the box and the clamshell, and the disassembled craft is inside the clamshell. There are four pieces: the main fuselage, two wings, and the display base. Each component is wrapped in tissue paper and held in an individual slot within the clamshell. Assembly takes no more than a few seconds, and the Arwing can be disassembled and reinserted into the box without too much hassle.

Even before you get the box open, the first thing you notice about this is its weight. As noted on the package, just about everything is formed in cold-cast resin and tips the scales at just over 11lbs (5kg). As with other high-end polystone vehicles, the casting is very good but somewhat limited by the material. The wings are nice and straight (critical for the 18" (46cm) wingspan), showing no signs of droop either at the joints or across the span. The control surfaces and signal lights are all sculpted in, and edges are generally nice and sharp. The G-Diffusers are correctly aligned and have some very nice detailing along their back edges. The main fuselage is also nicely done, with recessed panel lines and just enough vents and ports to keep it interesting. The work around the main thruster is particularly nice, with the exhaust deeply recessed under the Arwing's distinctive stern. The canopy is the only plastic part of the Arwing, and is cast in a frosted teal/blue. Unfortunately, the frosted finish makes it nearly impossible to see any of the cockpit's details clearly (hence the "N/A" in the above scoring).

The bulk of the Arwing is painted light gray, with darker gray used for the panel lines, nose cone, canopy frame, and weapon ports. An orange bar is painted near the leading edge of the canopy. The G-Diffusers and exhaust port are painted a brilliant metallic blue with dark gunmetal (almost black) detailing. The hexagonal winged "SF" insignia is printed on both sides of the fuselage ahead of the cockpit, and the red winged fox is printed on both sides behind the canopy. All of the paint is smooth, consistent, and sharply defined, but on close inspection the painted panel lines don't always follow the cast edges. The difference is negligible, but it's there. The insignias, G-Diffusers, and exhausts are all spot-on, with no signs of bleed or registration errors.

A weighted display base is included, which plugs into a hole on the underside of the Arwing. It's nicely painted, black with a red Star Fox insignia. The bottom part of the base is shaped like an old flat iron, with a curved arm coming up to support the ship. The pose is is pretty basic, but considering the weight of the craft an extra joint or dynamic pose would likely be asking for trouble.

A variant of the Arwing, limited to 500 pieces, features a purple LED in the exhaust.

First 4 Figures claims that the statue is based on the original game files with modification by Victor Hugo. The overall look and feel of the craft bears this out, with the statue looking like a real world rendering of the game model. Hugo's work was likely translating the Arwing's skin into sculpted details, which was done beautifully. Scaling is a bit tricky: the official length of the Arwing is "28sm," but no one seems to know quite what an "sm" is. Standard Meter? Short Mile? Santimeter? Space Monkey? It's even more difficult due to the nature of the pilots, since we don't know if Fox McCloud is supposed to be human sized or not. If we assume he is, a 1/24 scale version of him would fit nicely in this cockpit.

Overall, this is very nice work by First 4 Figures. I personally would have preferred the wings swept back rather than in all-range mode, but it looks great and the size and weight make the Arwing a commanding presence in any collection. If you're a fan of the Star Fox series, it's well worth adding to your collection. Highly recommended.