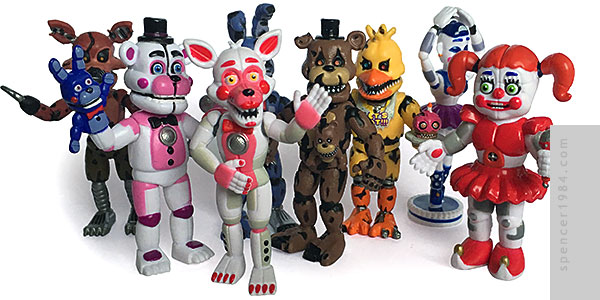 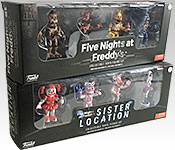 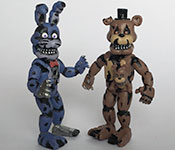 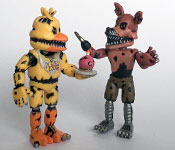 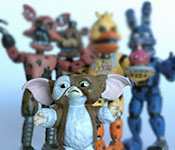 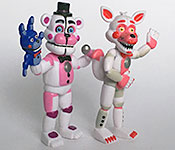 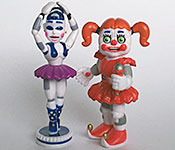 The success of Five Nights at Freddy's led to a number of sequels with a wider variety of characters. In the fourth installment, the location changes to a house where rotted and vicious "Nightmare" versions of the original cast terrorize the main player, while Sister Location (the fifth game in the series) has the player working at Circus Baby's Entertainment and Rental, the home of several animatronics originally destined for Circus Baby's Pizza World before the restaurant was closed due to "gas leaks." Among these are the titular Circus Baby, dancer Ballora, and recolored "Funtime" versions of Freddy and Foxy.

Four figures are packed shoulder-to-shoulder in tidy window boxes that measure 11" (27.5cm) x 4" (10cm) x 2¼" (6cm), striking a nice balance of minimal wasted space and good displayability. The window is framed by a poorly-lit image of the inside of Freddy's or Circus Baby's, which bleeds onto the end flaps. The rest of the package is flat black. The games' title is centered on both the top and front panels, on extensions that cut into the window. The front panel also has the Funko logo, "Collectible Vinyl Figure Set (in three languages), and the age restriction/choking hazard warning. The top lists the character's names over their respective tray notches. Each end flap repeats the title and "Collectible..." tag from the front panel. The back panel of S3 has images of the 12 "Freddy's" figures over a poorly-lit image of the security office, while the back of Sister Location only shows the four Circus Baby figures overa dim image from that location. All the text info from the front panel is repeated on both boxes, and the bottom panel has all the legal info. Inside, a single plastic tray holds all four figures with no twist-ties or tape. A single cardboard print is slipped behind the tray, which serves to continue the image that frames the window. It's a good looking box, and it's easy to get the figures in and out of it without damaging anything.

All eight figures are cast in soft vinyl, and assembled from multiple pieces to get the best detail possible at this size/price. The casting is nice and sharp, with minimal casting defects and clean assembly work.

Nightmare Freddy has the appropriate damaged appearance, with more black patches than even the original Foxy. He's leaner than his regular appearance, and has sharp claws and teeth to further enhance his frightening visage. A single Freddle is poking out near his waist, with a simplified but still clearly tattered appearance. Casting is nicely done, with smooth innards and textured fur. The mechanical innards have been necessarily simplified, though Funko did try to at least hint at some exposed wiring poking out in places like Freddy's tattered right ear. Paint is equally good, with the edges of the colors sharply defined and only a few small spots of bleed. Freddy is mostly medium brown with a lighter brown for his muzzle and chest. Gloss black is used for his hat, while a flat black is used for all the exposed areas and his bow tie. All ten claws, his neck, and his sternum are silver. His teeth are white, and his pupils are red. The Freddle is similarly painted: two-tone brown, black tatters and hat, white teeth. Even his little eyes are painted to look like lights floating in empty sockets, a surprisingly good touch for a figure that's only ½" (1.2cm) high.

Nightmare Foxy isn't quite as good as Freddy. part of it is casting: while he still has the good texture combination of smooth and furry areas, his longer muzzle can't mask the fact that his mouth is a solid black piece. He does make up for it with nice sharp detailing on his hook, hand, and raw mechanical legs. Paint is similarly good, but not great. His furry areas are two shades of pink, with brown pants, red eyes, and white teeth. Black is used for the base of his hook hand as well as all of the tattered areas, and silver is used for his legs, neck, hook, claws, and exposed parts of his skull. Bleed is more severe on Foxy, with many of his teeth missing their marks and the black of his torso coming up over his fur.

Nightmare Chica is somehow the most disturbing of the Nightmare figures. In part because her bright yellow contrasts so severely with the tattered black areas and exposed skeleton. Also, while she is more intact than Foxy, the difference between her normal/intact look and this is much more stark: half her toes are raw metal, her kneecaps are missing, and large gashes are present on her head, legs, and feet. Chica's beak is much wider than before, and open to show the usual Nightmare rows of sharp teeth. Her eyes are mismatched, with the left being the usual red and the right being a dull blue. Her bib is tattered, though the "Let's Eat!!!" is still legible. Mr. Cupcake further adds to the demented appearance, with his own set of miniature razor teeth, bulging red-glowing eyes, and tattered surface. Overall Chica's paint is between Freddy's and Foxy's: a little trouble lining up the edges of the mouth and teeth, but otherwise good.

The final Nightmare figure is Nightmare Bonnie, who once again is most similar to Freddy in appearance: leaner than usual torso, lots of damage, an open-but-not-screaming mouth, and a generally intact appearance. Bonnie has suffered more damage than Freddy, with the left foot and right hand completely stripped to the endoskeleton. Bonnie's torso is also ripped wide open, exposing the central support column. Paint is on par with Freddy: two-tone purple, black tattered areas, silver for the exposed skeletal bits, red for the bow tie, white for the teeth. Bonnie seems to have been the only Nightmare creature to have kept their original eyes, which are painted white with light purple pupils.

For Sister Location, the set starts with "Baby" (not "Circus Baby"). Unlike the FNaF figures, these animatronics lack fur and so the sculpts are entirely smooth. Funko didn't take this as an excuse to be lazy, though: Baby has a great deal of intricate casting work, including her eyelashes, the seams in her head, the bells on her shoes, even the tiny fan in her abdomen. She's cast in stark white with light gray panels on her arms, legs, and neck. Her hair and fan housing are reddish orange, while her top, skirt, and shoes are a true red. The difference is subtle, and Funko could have easily skipped a step by making them the same color, but the extra effort is appreciated. The bells on her shoes are gold, her microphone is red with silver detailing, her cheeks, mouth, nose, and right palm are red, and her eyebrows and hair ties are blue. The work on her eyes is another impressive feature: black surrounds/lashes, unpainted whites, green irises, black pupils, and white highlights. Everything here is registered perfectly with no sign of slop or bleed. Here mouth isn't quite as perfect, with her upper teeth going onto her lips a bit, but the black inside her mouth and lower teeth are fine. She also has a little bleed where her hair ties meet her head, and at the top of her collar and bottom of her hair, but since all of these problems are on her back they're easy to ignore.

Funtime Freddy also starts with a smooth white base, and like Baby has a lot of good sculpting for his head seams, chest speaker, and the Bonnie puppet on his right hand. Freddy has purple panels on his feet, knees, cheeks, and inner ears. His outer thighs, chest, shoulders, elbows, and muzzle are pink. Black is used for Freddy's hat, eyebrows, nose, and the primary seams on his head. Like Baby, he has multicolored eyes: black, white, blue, and black, with a white highlight in each. The Bonnie puppet is bluish purple with light panels on the chest, palms, inner ears, and muzzle. Bonnie's cheeks and tie are red, ad black is used for the single chest button, mouth, and nose. Funko skipped the five-colored eyes on this tiny version, but Bonnie does still have distinctly colored eyes with pink irises.

Funtime Foxy has the same high-quality sculpt as the others, with a paint job that is a hybrid of Baby and Freddy. Like Baby, Foxy has light gray panels on his legs, arms, and midsection/lower back. His toenails, fingernails, bow tie, lips, cheeks, eye lids, eyebrows, and inner ears are red; his knees, tail tip, chest, hands, and muzzle are pink; his chest speaker is silver; and his mouth, nose, whiskers, and buttons on his legs are black. Foxy lacks the black surrounds of the other figures, but his eyes do have yellow irises with black pupils and white highlights.

Lastly, Ballora. She is the closest to a human-shaped figure in the series, without the usual puffy arms or exaggerated features. Because she is posed en pointe, Ballora is also the only FNaF figure with a base. She has the same high-quality sculpting as the other Sister Location figures, with the appropriate head seams, joints, and fine detailing on her earrings, tiara, and shoes. Her shoes (and their laces), shoulder joints, top, eye lids, eyebrows, and hair are dark blue; her tutu s purple; her earrings and shoe decorations are gold; her lips and cheeks are pink; and her inner mouth and wrist joints are black. Ballora has medium gray panels on her knees, outer thighs, lower abdomen, and arms. Her base is styled like a single-layer cake, dark blue with white trim. While her paint is generally good, though her relatively small size exaggerates the few alignment issues that are present.

All eight figures have articulated necks that let you rotate the heads 360°. Despite there being no articulation in the legs, they all stand on their own with no problem.

Generally, these all match their game appearances nicely. Several details had to be simplified thanks to the realities of making figures that are so small, but Funko did a great job suggesting the details they couldn't literally reproduce. Nightmare Foxy is the only one that really suffers from the faked mouth, but even that isn't too bad once you step back from the figure. Scaling is kind of all over the place: officially, Baby is second only to the combined Ennard in height, but here she's the shortest figure of the set. The few that have official heights seem to be in the 1/30 - 1/43 range.

I really liked Funko's first FNaF sets, and am happy to see that htey kept up their quality for these two. Even my usual pickiness over scale is easy to ignore with these, they're simply a well done series of figures that look great.