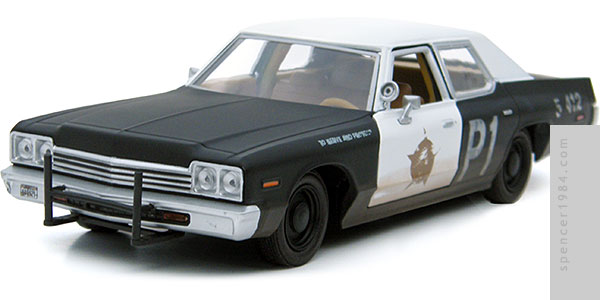 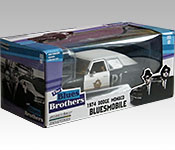 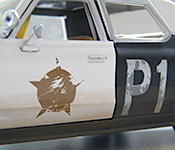 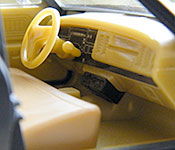 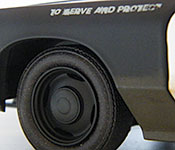 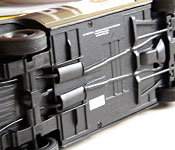 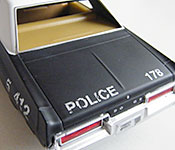 The Blues Brothers first appeared on the April 22, 1978 episode of Saturday Night Live, fronted by original cast members Dan Aykroyd and John Belushi. The popularity of the musical sketches led to SNL's first feature film in 1980, a musical/comedy/chase flick written by Aykroyd (his first attempt at a screenplay). The film enjoyed initial success (opening in the #2 slot behind The Empire Strikes Back) as well as a strong cult following in the years after. One of the highlights of the film was the Bluesmobile, a retired Mount Prospect police car noted as having "...a cop motor, a 440-cubic-inch plant. It's got cop tires, cop suspension, cop shocks. It's a model made before catalytic converters so it'll run good on regular gas."

Continuing the trend of previous TV & movie-themed diecasts, The Bluesmobile comes in a simple window box with a unique cutout for the window and a movie-specific color scheme. The GreenLight logo, scale, and "Limited Edition" are printed on every surface, and the movie logo is printed on every surface except the bottom. The back panel has a cropped and mirror-flipped section of the movie poster, along with a short paragraph describing the plot of the movie. The interior tray repeats the exterior design, and the car is held in place with a folded plastic tray. The push bar is held in a small pocket near the front of the car with a strip of clear tape.

As usual for GreenLight, the casting is nicely done with clean lines, straight panels, and no flash or other malformed spots. The front window frames are a bit heavy—a concession to the realities of a mass-market diecast—but otherwise the detail work is delicate and sharply defined. The plastic components aren't quite as well done, with a small gouge at the right corner of the front bumper, heavy sideview mirrors, and a misaligned spot light. There's also some rough marks on the top edge of the rear bumper, visible by looking in the gap between it and the trunk lid. Flat paint is used for the body and trim: black and white for the body, silver and gold for the trim and markings, and orange and red for the front and rear side markers, respectively. The paint is well done, with even coverage and generally sharp color breaks. The top of the left rear door is the only real exception to this, where the white has bled into the black a smidge. A dirty brown spray has been applied to the bottom half of the body, and the markings are all appropriately chewed up to represent the sorry state of the Bluesmobile's paint. The taillights are clear red plastic, the parking lights are clear amber, and the headlights and windows are clear. There is no rear window, a nod to the damage the car took from the Good Ol' Boys after the band's gig at Bob's Country Bunker. The windshield and rear side windows are flush mounted, and while they are all sized well the side windows fit the openings a little tighter than the windshield.

The interior is cast entirely in tan plastic, combining GreenLights soft vinyl for the front bench seat with a more rigid but identically colored plastic for the rest. Plastic dress panels cover the insides of the B pillars, a very nice touch. Unfortunately, this was not carried any further, so the insides of the C pillars are overspray black and white (made all the more obvious by the missing rear window). The seats and door panels are nicely textured, and a separate CB radio is mounted under the dash, but the dashboard face has a single sticker making up the entire instrument cluster. Also, the steering column and wheel are massively out of proportion. The chassis is also a bit of a letdown, with only rudimentary shapes indicating the engine, transmission, subframes, suspension, and fuel tank. The exhausts are nice, though, with separate dual pipes aft of the rear axle. The push bar easily snaps into the chassis and front bumper, and stays in place reliably if not firmly. The wheels are black plastic with vinyl tires.

The only feature is opening front doors. They line up pretty well, though the hinges feel rather delicate and could be easily bent.

As a '74 Monaco, GreenLight did a very good job on this replica. the only trouble spot is that the top rear corners of the front window frames are too rounded, either as a safety measure or due to the limitations of the material. But the bigger problem is this casting as the Bluesmobile: it's way too nice. There are no dents, it's far too clean, and the graphics are still too sharp and visible. GreenLight made a valiant effort with the aforementioned dirt fade and little details like the "DO GE" under the trunk lid, but it's simply not enough. Such is the reality of wanting to reuse this casting for non-Blues Brothers releases in the future. This reality also means a few other details that are accurate, just not for this particular car. These include the dog dish hubcaps (beautifully rendered but totally missing from the Bluesmobile), the right sideview mirror, and the post mount for the right spot light. Scaling is a near-perfect 1/24, though no one got that memo to whoever did the license plates...both front and rear are about half the size they should be (though they are the correct Illinois BDR-529).

A 3RD-generation Monaco in 1/24 scale is something that many of us have been waiting to see for years. When GreenLight announced that they would be doing it as an in-house new tooling, I considered it a best-case scenario based on their history of above-average work. While this isn't quite as excellent as their early pace car work, it is a very well done piece and I am absolutely psyched to have it as part of my collection. Honestly, it's really a no-brainer...Blues Brothers fan? Buy it. Vintage cop car fan? Buy it. Want to support more full-sized car replicas? Buy it. Hope to encourage a 1/24 Truckster? Buy it.