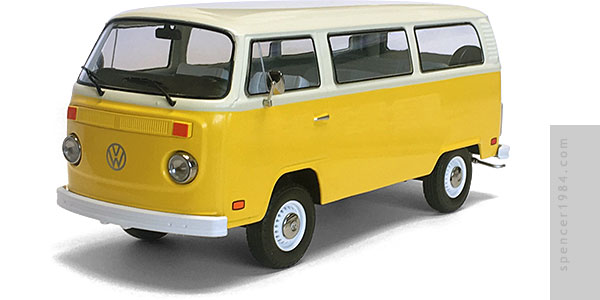 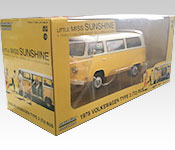 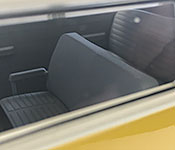 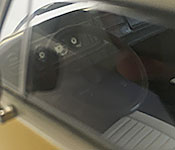 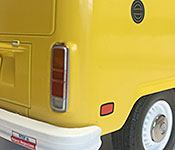 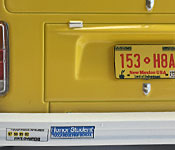 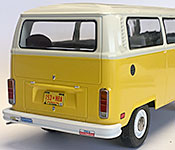 After qualifying for the "Little Miss Sunshine" beauty pageant, Olive Hoover and her family make the 800-mile trek from Albuquerque, New Mexico to Redondo Beach, California in their Volkswagen Type 2. The VW becomes its own character and mild antagonist, developing quirks such as a continuously honking horn and the need to be push-started (leading to the shot of the family running to catch up to it, used in the movie's poster and other promotional materials).

This release follows the trend we saw with the Field of Dreams VW, though the much simpler poster for Little Miss Sunshine translates to a more basic box that just doesn't look as nice as the earlier T2s. The main window on the front of the box is surrounded by elements including (counterclockwise from top left) the movie title and tagline, the GreenLight Hollywood logo, "1978 Volkswagen® Type 2 (T2) Bus," the photo from the movie poster, "Contains: 1 Die-Cast Car," "Adult Collectible." and "Limited Edition/1:24". The top of the box has the GL logo, movie title, and a repeat of the "Limited Edition..." from the front panel. Each end flap is essentially the movie poster, with the logos and text from the front panel rearranged around the edges. The back is essentially a reorganized end flap with GreenLight's contact information added to the bottom edge. The bottom has the required legal info. the inside tray is a uniform yellow with the van held in a clear plastic tray.

This is a modified reissue of GreenLight's later "high marker" Type 2 casting (compared to the earlier "low marker" T2 used for the Lost release). Changes to it include the loss of the roof rack, radio antenna, and front-mounted spare tire, and the addition of the missing hubcaps and a second outside rear-view mirror on the passengers' door.

The paint is as good here as it was on the Field of Dreams van, but the colors are working against it this time around. The bright yellow and off-white make the panel lines seem shallower than they are, and don't provide enough contrast to let the painted chrome trim on the beltline and door handles stand out. The detail work is still technically excellent, especially the fine work around the window frames, license plate, and bumper stickers. From left to right they are: "Yucca Lodge Apaches State Champions/97 · 98 · 99 · 02," "Honor Student," and "Step 8: Reject Rejection." All three are cleanly applied and sharply printed, though you may need a magnifying glass for some of the smaller text. The same goes for the expertly recreated 153-H8A New Mexico license plate.

The interior is two-tone gray with black flooring and a black dashboard. The detailing remains excellent, and is even easier to appreciate in this lighter pallette.

Nothing extra here, what you see is what you get.

As with the other Combis produced by GreenLight, it's a spot-on replica aside from one nitpicky detail. In this case, the sliding door has the wrong handle groove as Volkswagen updated the mechanism in 1974 (this retains the pre-74 style used for Ray's van). They did make an effort to include the late model exposed fuel fill as a printed element on the rear quarter. Everything else, from the colors to the license plates, matches the movie prototype nicely.

I'm glad to see GreenLight is continuing its line of "Hollywood" 1/24 Type 2s. It's a nice base, and they seem willing to make an effort to get these as close to their on-screen counterparts as possible. Reccommended.