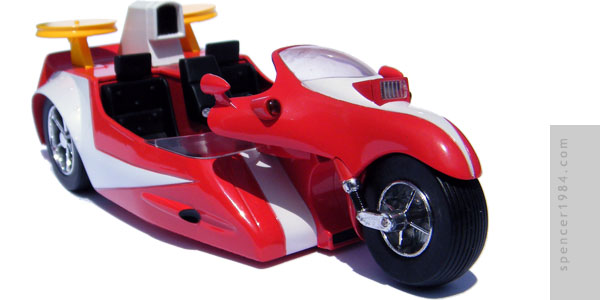 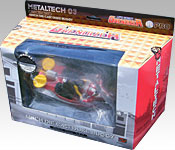 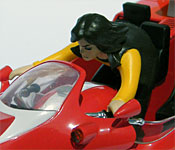 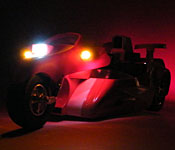 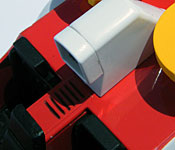 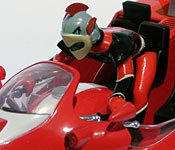 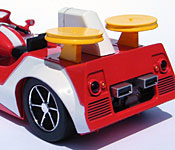 Duke Fleer, sole surviving member of the Fleer royal household from the Vega Star, who comes to Earth and lives under the assumed name of Daisuke Umon (adoptive son of Dr. Umon). While escaping, Duke managed to steal the Grendizer, a powerful robot that interfaces with Spacer, a flying saucer that enables the robot to fly. Two years later, Duke's new homeworld comes under attack by the same forces that killed his family and he must use the Grendizer to stop them. In addition to these vehicles, he also makes use of the "Duke Buggy," a three-wheeled custom motorcycle.

The Duke Buggy is packed in a large (11.5" x 8" x 6"/30cm x 20cm x 15cm) box, far bigger than what is needed. The upshot of this is that the Buggy is very safe. The front panel has a window framed by a grayscale image of Dr. Umon's farm (barns, a silo, fences, etc.). This image is continued on both end flaps, though now with a red overlay. "6 Inch Die Cast Duke Buggy" is written in a stencil font across the bottom of the front panel, and "Metaltech 03" is written vertically on each end flap. The top and bottom of the box both have a vintage pyramid texture in orange, with the UFO Robot Grendizer logo centered on both (the top logo is pushed back a little further because of the window). All of the aforementioned verbiage plus the HL Pro logo are on a small flap that sticks up along the back edge of the box. It has a punch hole, but the size of the box is much better suited for shelves rather than pegs. The back of the box is primarily a large drawing of Fleer driving the Duke Buggy on a country road, with a flying saucer hovering near the top left corner of the panel. The Grendizer logo, information about the model (with a small product photo), and a small blurb about the show's production run down the right edge of the panel. The legal information, age restrictions, and bar code are in a white bar beneath the drawing. There is a cardboard sleeve within the main box that acts as a backdrop for the Buggy: the farm scene on the front panel is continued along the back wall, so that if you view the box at eye level it appears to be a nearly uninterrupted scene. The side and bottom panels of this insert are black. Within that is a plastic clamshell that holds the Buggy with "civilian" Duke at the controls. A combination of plastic sheeting and soft foam further protect the Buggy, and "Grendizer" Duke is packed separately in a plastic baggie. A small instruction sheet covering battery installation is sandwiched between the tray and insert. Overall the packaging is very well done, with nice attention-grabbing graphics and a cool "retro" feel that fits the design of the show. It also protects the Buggy perfectly—this one had gotten partially crushed in transit, but the damage never even got close to the Buggy.

The main body is diecast metal, with plastic used for the front assembly and detail work. Everything is cast very sharply, with no rough edges or obvious fit problems. The windshield is a little cloudy, but it feels like that may polish out with a little Novus. It may be residue from the plastic wrap inside the box: the secondary windshields were not touched by it, and are clear and smooth. Also, the left disc is slightly closer to the air intake, and there is a surprising amount of play in the front forks. The wheels and handlebars are chrome plastic, and the tires and seats feel like a slightly softer black plastic. The headlight, marker lights, and tail lights are LEDs. The bulk of the Buggy is painted gloss red, and has a beautiful finish with no runs, fades, or orange peel. The chassis is painted the same red, but has a (cast in) textured finish that looks a bit like undercoating. Silver paint is used for the fuel cap, mirror glass, pedals, and exhausts. Brown is used for the exposed drivetrain components and gauge faces, yellow is used for the rear details, and black is used for the instruments, shock boots, hand grips, side intakes, vents, and upper scoop. All of these are done flawlessly, with clean finishes and sharp edges. Unfortunately, the same can not be said for the white stripes: the front fender, fuel tank, and forward hull stripes are good, but the side stripes show bleed in several places. This wouldn't be noticeable if not for the cast-in break lines, and at this price point it seems like a rookie mistake.

The Buggy has a posable front fork and working lights (batteries not included). The fork is a bit loose, causing the leading edge of the Buggy to droop when placed on a flat surface. The lights are all LEDs, and are nice & bright: white for the headlight, yellow for the markers, and red for the taillights. It also comes with two variations of the Duke Fleer figure: one in civilian clothes as shown on the box art, and one in his Grendizer suit. Neither figure has any articulation, but they are posed to sit on the main "saddle" seat with their hands on the handlebars and both figures fit very well. The paint on both figures is excellent, especially the Grendizer suit.

This is a very faithful replica of the Duke Buggy, capturing the unique design perfectly. The mechanical details visible through the rear opening are a nice touch, even if they don't exactly line up with the rear axle. The two figures also appear to be correct to the animation models. Based on their size, this appears to be pretty close to 1/24 scale.

Although the Duke Buggy is very good overall, it's not quite great. The unique nature of the vehicle, additional figures, working lights, and relatively limited run are all very cool, but the loose steering, paint bleed, and misaligned parts drag it down. I'm happy that I got it, but I also did not pay anywhere near MSRP for it - your mileage may vary.