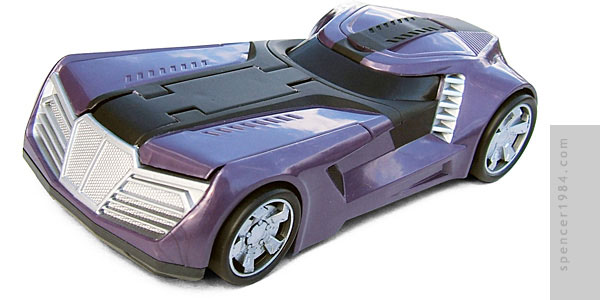 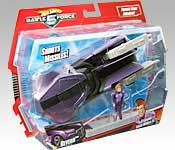 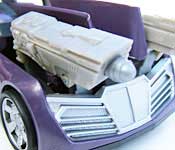 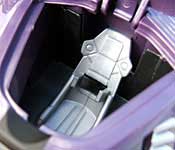 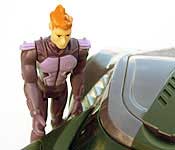 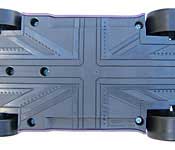 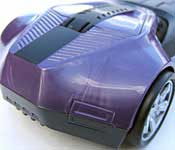 The Battle Force 5 standard vehicles are packaged in a roughly octagonal blister card 11" (28cm) wide and just over 8.25" (21cm) high. The clear blister takes up nearly the full front of the card, with only a 1" (3cm) strip across the top for the Hot Wheels logo/BF5 logo to the left of the hanger and "trading card included" text to the right. The official site URL (BattleForce5.com) is written along the bottom right edge. The rest of the front of the card is covered with a blue swirling electricity design framed with red mechanical elements. The vehicle and driver names and images are on a separate insert card, as is the legal information (the latter being folded to appear across the bottom of the packaging). The back of the card repeats the HW & BF5 logos, age restriction, and URL, plus it has images of the show's characters, a close-up of the driver for this particular car (Stanford Isaac Rhodes IV) and notes about the driver and the car. Below the images are callouts to "transform vehicle to battle!" and "open for weapons!" next to photos of Reverb in street mode and with the sonic guns deployed. Across the bottom of the cardback are co-sells for Zoom Takazumi/Chopper, Stanford Isaac Rhodes IV/Reverb, Agura Ibaden/Tangler ATV, Captain Kalus/Fangore, and Zemerik/Zelix. Reverb is snapped into a plastic tray with a plastic band holding the roof hatch closed and one rubber band around each sonic cannon. Stanford is held in a second, smaller tray near the bottom center of the larger tray.

Although BF5 is clearly a line aimed at a younger audience than your typical diecast collector, Reverb looks right at home with other "show rod" replicas (and bears more than a passing resemblance to the classic Hot Wheels Twin Mill). The casting is well done, with sharp edges and clean panel breaks. There is a great deal of detail work throughout the model. Some of this work, like the grille, is pretty obvious. Other details, like the way the front wheel arch flares smooth into the front fascia, are more subtle but still speak to the sculptor's credit. The few concessions that had to be made for the car to function as a toy have been handled well: the thumb notch to open the roof hatch has been blended into the roof so that it looks like another intake, and the hinges for the roof hatch and sonic cannon doors have been smoothed into the body as much as possible. The only real fault I see is the wheels, which have the brakes cast as part of them so the calipers rotate with the wheels. The chassis sports a full belly pan, but has the armor plates arranged to look like a British flag in honor of Stanford's native land - a nice touch. The interior seems a bit weak: there are no controls or instruments, and the body wraps around inside creating a purple bulkhead around the single seat. The seat is silver with a clip to hold the driver in place, while the floor, lower side bulkheads, and rear wall are black. The entirety of the car is cast in plastic: the body is cast in purple with black painted stripes/gills and silver painted intakes/grille. The windshield, chassis, and wheels are cast in opaque black and the wheel centers/brakes are painted silver. The sonic cannons are cast in silvery gray while their missiles are a brighter silver plastic. The paint work is minimal but done very well, including some tricky spots like into the thumb notch and around the windshield cowling.

Reverb's primary feature is its "sonic cannons," represented by a pair of missile launchers concealed under two doors in the hood. Raising either door causes the launcher on that side to raise into firing position, and the missile is fired by pressing a small button on the outside of the launcher. The launchers are spring loaded, and the missiles travel about 18" (45cm). Make sure to fully seat the missiles before pushing the launchers back into the body - if the missiles are left at their first stop, they can hang up on the inside of the body and will not let the launchers deploy properly. The car also comes with a 1/24 scale figure of Stanford Isaac Rhodes IV. Stanford stands about 3" (7.5cm) tall and moves at the neck, shoulders, and hips on nice stiff joints. The sculpting is generally pretty good, including some nice details like the tiny "5" logo on his uniform. His hair doesn't quite seem to match the drawing on the box art, but I can't really see how they could get it closer. He fits in Reverb's cockpit easily, and the clip on the seat holds him securely without being too tight.

As a fantasy design with no official specifications available, accuracy is a little difficult to pin down. I can say that Reverb looks generally faithful to its animation model, with two main exceptions. First, the primary grille and side gills on the animated car have slats, while the toy has plain mesh panels. Second, the doors needed access the sonic cannons and cockpit of the toy do not exist on the animation model (a likely concession to making a real object out of a CGI model). A few other details could be made to match the prototype with extra paint applications, such as the front splitter and rear side ports, but the sculpting work is there. The interior is completely inaccurate when compared to the animation model, and is simply there to hold the Stanford figure. The exact size of the car seems to vary quite a bit when watching the cartoon, but this replica measures approximately 7.625" (19.5cm) long and 3.5" (9cm) wide - very close to an average 1/24 scale vehicle.

The line between toys and collectible replicas continues to blur, and vehicles like Reverb are the reason why. The sculpt, casting, and paint work are equal to diecast cars in the same price range, while the sturdy construction and working action features mean that kids can have fun with it as well. I wish the interior was more detailed, but the opaque glass prevents this from hurting the overall look. The fantasy design will prevent many collectors from purchasing the Battle Force 5 cars, but if your child is into cars or you want a unique design to add to your own collection, Reverb is a great choice. Very highly recommended.