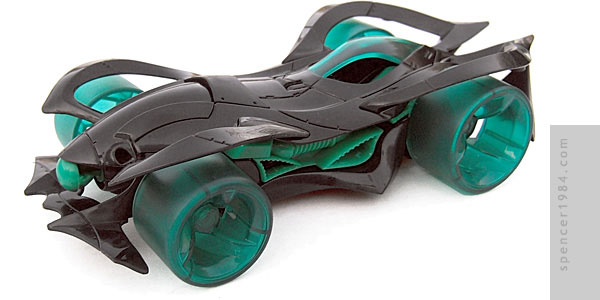 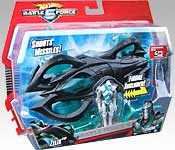 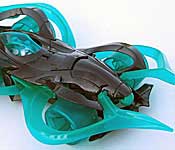 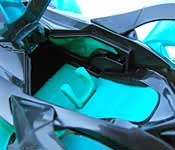 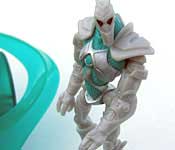 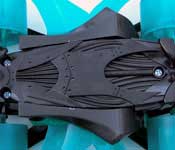 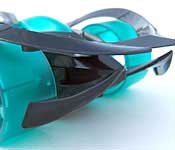 The Battle Force 5 standard vehicles are packaged in a roughly octagonal blister card 11" (28cm) wide and just over 8.25" (21cm) high. The clear blister takes up nearly the full front of the card, with only a 1" (3cm) strip across the top for the Hot Wheels logo/BF5 logo to the left of the hanger and "trading card included" text to the right. The official site URL is written along the bottom right edge. The rest of the front of the card is covered with a blue swirling electricity design framed with red mechanical elements. The vehicle and driver names and images are on a separate insert card, as is the legal information (the latter being folded to appear across the bottom of the packaging). The back of the card repeats the HW & BF5 logos, age restriction, and URL, plus it has images of the show's characters, a close-up of the driver for this particular car (Zemerik) and notes about the driver and the car. Below the images are callouts to "transform vehicle to battle!" and "press for weapons!" next to photos of Zelix with the energy blades in place and with the missile firing. Across the bottom of the cardback are co-sells for Zoom Takazumi/Chopper, Stanford Isaac Rhodes IV/Reverb, Agura Ibaden/Tangler ATV, Captain Kalus/Fangore, and Zemerik/Zelix. Zelix is snapped into a plastic tray with a plastic band fed through the side ports and under the tray. The missile is snapped into a pocket under the front of the car (approximately where it would be located if you were looking through the blister at the top of the car). Zemerik is held in a second, smaller tray near the bottom center of the larger tray. The energy blades are packed in the bottom of the blister behind Zemerik, almost entirely hidden by the insert card.

Zelix is a rather complex shape, and the open fenders and curved panels seem like they would lend themselves to crude casting or errors quite easily. Fortunately, Mattel has made sure to avoid these problems with a good breakdown of parts that retain the look and feel of the animation model. The central fuselage, fenders, front and rear splitters, and chassis are all cast as separate pieces and assembled in a way that masks the break lines among sculpted panel lines. These components feel somewhat softer than other cars in the BF5 line, possibly a safety requirement needed thanks to the myriad sharp features used in Zelix's design. There is also a separate panel on the hood that acts as a missile trigger, again molded to flow with the rest of the design. The canopy, energy blades, and wheels are cast in translucent teal plastic. The seat, side panels, and missile are cast in opaque teal. The cockpit is a combination of the teal and charcoal plastics, layered in such a way to look like an intentional design rather than the by-product of manufacturing a toy. The clip to hold the driver looks out of place, otherwise it looks pretty good. The only paint is the canopy frame, which is a very good match to the unpainted dark gray plastic around it.

Four energy blades can be attached to the sides of the car to match the animation model. There is also a missile launcher in the nose of the car. It looks good both loaded and unloaded: the launcher looks like an intake port when empty, and the domed warhead of the missile looks like an integral part of the car when in place. There is also a 1/24 scale figure of Zemerik that can be placed in the cockpit. Zemerik moves at the neck, shoulders, and hips, and features a lot of fine detail work (especially around the face). The joints are nice and stiff and the paint applications are good, but the design doesn't quite match the drawing on the box art. Then again, the box art doesn't match the box art: the drawing of Zemerik and the prototype photo are completely different from each other and from the actual figure included in the package.

Something about this replica looks a little too tall when compared to the animation model, but that could simply be a matter of viewing angles. Also, if you compare it to the box art, it is missing several small printed components scattered across the body, and the wheels should have black centers. Otherwise, it does a great job of capturing the look of the original design while serving as a toy. Scaling on a design like this is very difficult, but it fits well with the other 1/24 BF5 cars.

Zelix is probably my favorite of the standard Battle Force 5 cars, thanks to a great execution of a unique design. The extra effort put into things like the cockpit design and chassis details show that somewhere, a designer was really putting some thought into the finished piece and it is appreciated. This is great for both kids and collectors, and would be a very unique base vehicle for a custom car project. Very highly recommended.