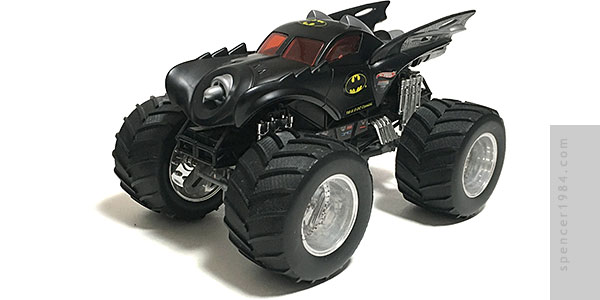 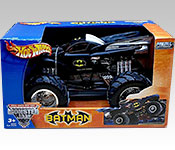 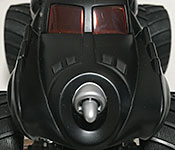 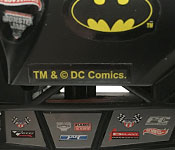 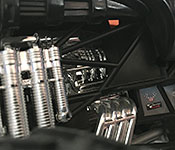 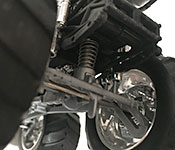 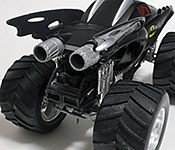 The Batman truck was announced to debut as a teammate to Superman in 2005, with all the related fanfare and product tie-ins. But troubles with the 3D body caused it to be delayed, and it wouldn't debut until 2006 when Jason Childress brought it to the Monter Jam in Charlotte, North Carolina.

The 2004 packaging consisted of a blue base color serving as the backdrop for the various Hot Wheels, Monster Jam, and Batman logos. A photo of the truck in action appears on the front, back, and both ends, and as this was before the actual truck's debut it is a superimposed image done in Photoshop. The top and front of the box are open so you can touch the truck, though there are no action features to activate. The back has co-sells for the rest of the Monster Jam line, including Rev Tredz, Crash & Smash, Crank & Crush, Grave Digger, and Crashzilla. Twist-ties and tape secure the truck in the box, pretty much negating any chance of getting it out without destroying the box.

Of the many versions of the truck released that first year, the 1/24 version is possibly the most realistic of the lot. The body is metal, painted a nice, clean satin black with silver accents and very little slop. The accents include the turbine intake, roof scoops, fin inserts, and jet exhausts. Transparent red windows let you see inside, where it looks like they have included a roll cage and dashboard. There is no seat, as this is where the body mount post is located. The chassis is well done, including suspension components, fuel cell, radiator, and a chrome engine. Chrome is repeated on the shocks and the wheels, which are wrapped in reasonably well done tires. The markings are all done with stickers, and while not ideal they were at least applied correctly and have maintained their adhesion all these years later.

The only feature here is the working suspension, but it does a lot and works beautifully. Pick it up, and the wheels go slack; push down, and both the front and rear axles will bounce back thanks to working springs. The way the designers did the suspension is especially clever, making the shock absorbers look functional while hiding the real springs over the differentials. You can also steer the Batmobile by tilting the body to the left or right.

As noted above, the truck this was meant to represent had not made its debut yet and so quite a few details changed during that time. One thing that was wrong, and stayed wrong for the first several releases, is that Hot Wheels used large chrome wheels with moderately low profile tires, which was never run on the Monster Jam vehicles.

The Batmobile was off to a rocky start in the world of Monster Jam, with the initial debut pushed back and the toys and other mechandise promoting a vehicle no one coulsd see. But it was and still is an interesting design, and as the only year to feature the Furst-inspired turbing intake the 2004 edition is especially interesting.