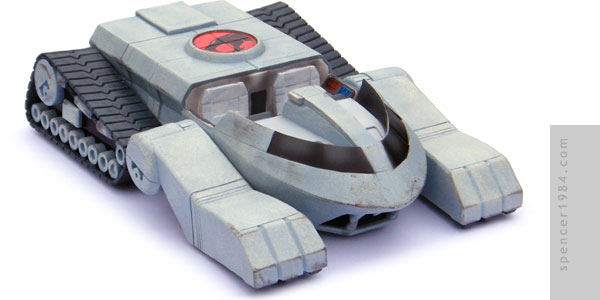 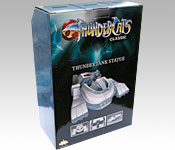 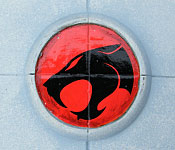 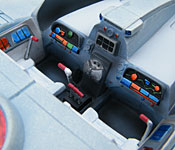 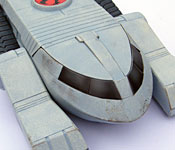 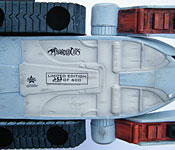 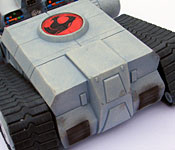 In the original Thundercats series, the Thundertank was built by Panthro out of parts scavenged from their crashed ship. He first mentioned the idea in episode 2, and showed it off for the first time in the beginning of the next episode. It quickly went on to become the Thundercats' primary mode of transportation, battle wagon, and workhorse. It has become an iconic part of the Thundercats universe, so much so that the 2011 reboot of the show featured a very similar vehicle.

The Thundertank is packaged in a unique cardboard box shaped like one of the hangars of the Cats' Lair. The base of the hangar is the front of the box, and has the Thundercats Classic logo near the top, "Thundertank Statue," a drawing of the tank with Panthro, three close-up photos of the statue, and the Icon Heroes logo. The sides, top and back of the box are printed in blue-gray with various tech panel lines and the top edge is truncated to create the hangar design. The final panel has the legal and sales info, a repeat of all the logos, and a hand-numbered box indicating the statue number and edition size (232/600). The tank is sandwiched between two styrofoam trays and wrapped in a plastic bag.

The main statue is made of a central fuselage, outriggers, and tracks. All of the parts are cold-cast resin with felt pads under the outriggers and treads. The detail work is generally very good, with nice sharp panel lines and clean edges. I'm particularly impressed by the mouth, which has six sharp-looking teeth framing a surprisingly deep cavity. The only place that feels lacking is in the tracks: while the treads themselves are great, the road wheels and upper suspension components tend to blur into one another. A little more separation on casting or some extra paint to help define them better would have been nice. They also appear to have been mounted wrong, with the tops of the tracks closer to the hull rather than parallel with the hull. Both tracks have the same camber, and the tank sits level, so this may just be an awkward design choice rather than an assembly error. The main hull is a light blue-gray, with dark gray used for the windshields, mouth, and tracks. The Thundercat symbol is painted gloss read and black. The chassis is detailed with the outrigger arms and rollers, more armor plating, and repeats of the Thundercats logo, Icon Heroes logo, and edition number (a nice touch to include this on the box and statue). The interior is not quite as sharp, but the paint makes up for any shortcomings. It has two seats with full displays and controls that include separate levers. The entire tank has been weathered, with the heaviest effects around the nose, paws, and exhaust ports. Very nice work overall.

The tank includes a removable canopy that fits over the cockpit. My personal preference is to leave it off to show off the interior work, but it fits perfectly so the tank looks great either way.

While there have been several Thundertanks over the years, this is the first one that makes no attempt to be anything other than a replica - it did not need to incorporate any action features, fit with an existing line, or pass any safety standards. As a result, it is a great looking piece that captures the look and feel of the animation model brilliantly. Scaling is always a little flexible with fantasy vehicles—even moreso when they come from classic cartoons—but judging by the seats this looks like a pretty good 1/24 scale. Other people have noted that the Thundercats Minimates fit in it perfectly.

This is a really fun piece, and it's nice to see that Icon Heroes went the extra mile with things like the interior detailing and removable canopy. The tracks are a little troublesome, but not a dealbreaker by any stretch. Very highly recommended for any fans of the Thundercats.