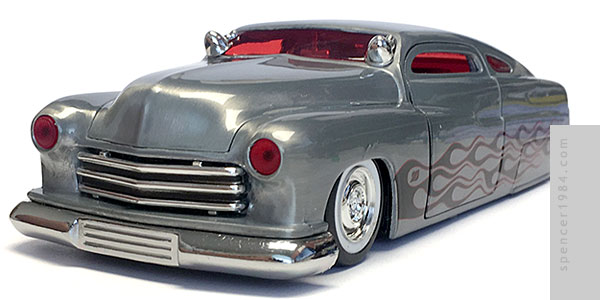 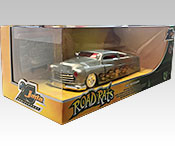 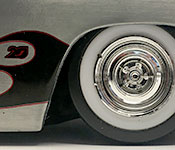 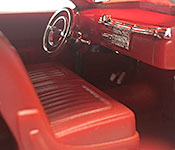 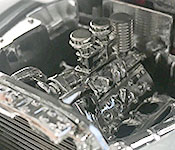 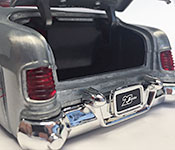 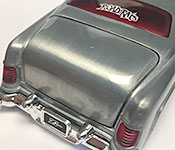 As part of Jada's 20th Anniversary packaging, the Merc's box is nearly identical to the Impala's. The purple fade has been changed to green, "Road Rats" replaces "Street Low," and the photo on the front is a dark Mercury (not the same one that's in the box, though).

As noted in the review of Harley's Mercury, the extreme top chop and slammed stance make this car look practically monolithic. Having bright chrome for the bumpers, grille, spotlights, and wheels lightens things up a bit, but the raw metal color creates a unified base color across the model, retaining that cool heft from the "bomber" release. All of the clear plastic is red tinted this time around, which ties in nicely with the red pinstriping around the black flames dancing down the side of the car. A small "20" is just behind each front wheel, and a white "Road Rats" adorn the rear window. All of the graphics are top notch, perfectly aligned and sharply printed.

The interior is red plastic with chrome accents for the dashboard, pedals, mirror, and steering wheel/column. All other parts for the engine, trunk, and chassis are exactly as they were on Harley's ride.

This release keeps all of the same features as the previous, plus the mosaic tile we saw in the Impala. As with the outer box, the series title and date have been updated to "Road Rats" and 2000, respectively.

Harley's Mercury was one of my favorites in the DC Bombshells line, and this does nothing to dampen my enthusiasm. The raw look fits the Merc, and the execution is excellent from both artistic and technical standpoints.