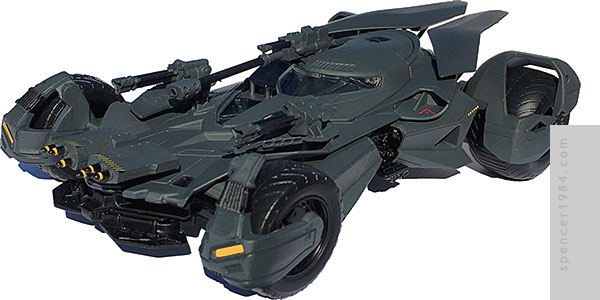 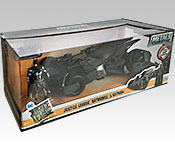 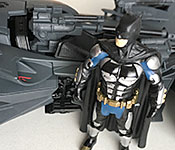 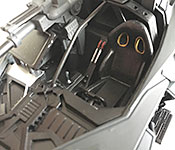 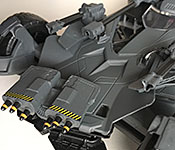 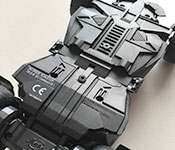 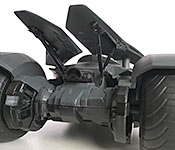 After receiving a disturbing vision about the upcoming attack by the forces of Apokolips, Batman takes steps to ensure a force is ready to meet and repel Steppenwolf and his army of Parademons. Among those preparations is upgrading the Batmobile, removing the second seat, modifying the canopy, and adding enough extra weapons to turn it into a rolling battleship.

Similar to the design they used in their Transformers series, the Batmobile is in a large box with the top forward corner being made of folded plastic to allow for an unobstructed view of the car. The background of the box is a dark gray textured to look like brushed metal, with a white and orange band around the bottom of the front panel and both end flaps. All three of these panels also have "Metals Die Cast" at the top (centered on the end flaps, right-justified on the front), the DC bullet and Justice League movie logos in the lower right corner, and "Justice League Batmobile & Batman" written in the orange part of the band. The front panel also includes an age restriction, second DC bullet logo, a photo of Batman and the Batmobile, and a "Die Cast Figure" callout.The back panel has co-sells for the Batman, Dark Knight, Arkham Knight, Batman Forever, Justice League, classic TV, and camo variant Tumbler Batmobiles. Another "Metals" logo, "Collect them all!" (in four languages), and a "Hollwyood Rides" logo are spread across the top of the panel. The legal info is split between the bottom of this panel and the underside of the box. Inside, the Batmobile is held to a folded cardboard tray via two screws. Jada has thankfully stopped overcranking these screws so I didn't have to destroy anything to get the car unpacked. They're still taping the tray to both end flaps, though, so you still can't open one end and slide it out - you have to open both and cut it loose. A single plastic band holds the canopy closed, and Batman is in a separate plastic tray mounted near the front of the Batmobile.

This is a modified version of Jada's Batman v. Superman: Dawn of Justice Batmobile, so most of it is familiar territory. Along with having the benefits of being a recent tooling, Jada's designers were smart about how to mix metal and plastic to create the best detail while still giving the car the appropriate heft. Paint is the same matte dark gray, with tiny areas painted black, yellow, red, and orange to highlight the details. Unpainted black plastic is used for the chassis (including the lower rear axle and bits that stick out under the nose and around its waist), wheels, wing actuators, and jet exhaust. The wheels are black vinyl. The interior is black plastic, with the left side identical to the previous release in both sculpting and paint apps.

As for what's new: the forward guns have been replaced by twin missile pods, painted a body-matching dark gray with black missiles. Each missile has an orange band painted near its tip, and the launcher has yellow and black caution stripes painted on the top leading edge. Two tri-barrel miniguns have been added to the canards just ahead of the cockpit. These also have gray housings and flash suppressors, with black barrels and ammo belts. The right cockpit clamshell has been left off, and the remaining clamshell has been remolded to account for the BFG and has a new glass piece that wraps past the car's midline. The BFG itself has the same theme as the smaller guns: gray housing, black barrel, gray muzzle brake. A pair of smaller black-barreled guns sits above the main gun, and the whole affair is mounted behind an opaque black shield. Casting is generally nice on all these new parts, with fine details like the mechanism on the main gun's mount and the ribs in the ammo belts sharply defined. A parting seam is somewhat obvious on the top of the muzzle brake, but otherwise things have been cleaned up nicely. Paint is equally good, especially the stripes on the missiles and launcher.

The missile launcher rotates on the same axis as the former guns, but is much wider and will scrape the paint if you go more than a few degrees left or right. The remaining canopy opens and closes on the same hinge it originally used, and still works great. None of the other guns move, despite what their mounts look like. There is also a metal Batman figure in his armored battle suit. The sculpting is quite nice, and includes fine details like the pouches on his utility belt and lenses on his goggles. Not sure what's going on with the paint, though...aside from using a color scheme more appropriate for a Batman & Robin variant, there is quite a bit of ghosting along the edges and a big white-printed copyright inside his cape.

Both the base car and the Justice League upgrades are all faithfully reproduced here. While the wheels do not have the proper through-axles to connect them to their armor, they fake it pretty well and the overall appearance looks good. Scale is on the small side, closer to 1/28, but given the history of incorrectly scaled Batmobiles I've pretty much given up on that stat unless it's more than 20% off.

Overall nice work by Jada. Their Batman v. Superman: Dawn of Justice Batmobile was a winner, and this just builds off of that solid base (as the movie prop did). It's too bad that scaling is off, but the 1:1 is so massive that this doesn't look out of place compared to other 1/24 scale cars. Recommended.