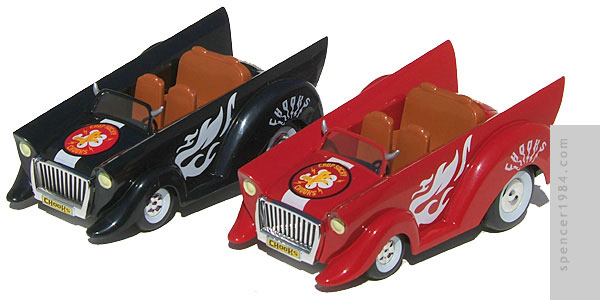 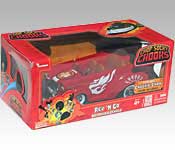 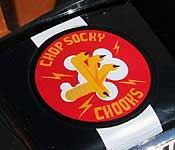 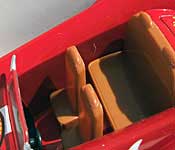 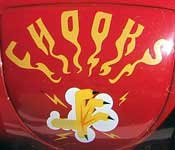 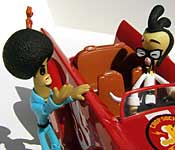 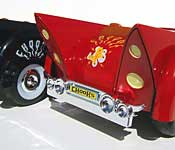 NOTE: This review covers both versions of the "Chooksmobile," as the cars are identical other than the body color and accompanying figure.

The Chop Socky Chooks vehicles are packaged in a bright red three-window box. The show's logo is located on all six panels: in the top right of the front panel, top left of the top panel, bottom center of each end flap,top right of the back panel, and centered on the bottom panel. The front panel also has the age safety information, vehicle name, the Aardman logo, a sticker advertising the included figure, and a graphic showing the three Chooks in action. The end flaps have solo close-ups of Chuckie Chan and Ko Joe (one on each end flap), and the back panel has computer generated images of the three toys in this series (the two Chooks Mobile variants and Bubba w/Piranha Vehicle). The vehicle is held to a "road surface" cardboard tray with two screws, and the figure is captured in a plastic blister in front of the car.

Although this marks a departure for Jada in that it's a plastic-bodied car instead of their usual diecast, the quality of the work is still very good. The price point requires more simplification than usual, but the cartoonish design lends itself to a simpler aesthetic without looking cheap. The only details that looks less than impressive are the lights, which are simply painted yellow circles instead of separate parts, and a parting seam on the front fenders. Otherwise, everything measures up to current 1/24 vehicle standards: the grille, bumper, and hub caps are bright plated chrome, the windshield is clear, and the tires are black vinyl. Paintwork is also good: although they are cast in the appropriate color, both the black and the Red Chooks Mobiles are painted (including the windshield frame), the whitewalls are clean and properly centered, and the graphics all look good. These include the windshield horns, license plates, a stripe and a "Chop Socky Chooks" logo on the hood, stylized flames on the sides, "Chooks" on each rear fender, and a modified logo on the rear deck. The interior is very simple, with separate brown seats and a separate steering wheel in an otherwise plain bucket. Again, this seems to fit the overall look of the cartoon car, so the lack of detail isn't really a problem. There is no chassis or engine detail.

Touted as a "Rev 'N Go," the Chooks Mobiles feature friction motors that propel the car forward or backwards after a short push to get them started (more enthusiastic revving will provide longer runs). Each car also comes with a figure from the cartoon: the black car comes with Ko Joe, and the red car comes with Chuckie Chan. Both figures feature articulated necks, shoulders, elbows, wrists, hips, and knees. Because the figures are so small, there isn't really enough material to keep the joints solid and so they end up being a bit floppy.

The Chooks Mobile is a standard "hot rod," based on a generic late 1950s convertible. Jada seems to have captured the overall look of the car. The red version is the one that appears in the show's introduction, and so it could be considered the more accurate of the two for that reason. As of this writing, the show is not available on DVD or for download. If episodes are released, this part of the review may be amended after a better comparison to the source material.

Chop Socky Chooks never caught on like other animated shows. As a result, Jada's CSC merchandise became a series of shelfwarmers. It's really too bad, because I found the Chooks Mobile to be a fun design that captures the look of a traditional hot rod without looking too much like any one specific make or model. The figures don't really add much thanks to their loose joints, but with just a little fiddling they can stand up on their own or be put into some basic poses. What really saves these cars is the price: at $4 each, you can get both of them for less than half the price of most other 1/24 cars on the market. True, you're not getting a metal body here, but with the friction motor drive the metal body would simply add extra weight and slow the car down. I consider these to be a neat pair of cars, and if you like the designs as well I don't think you'd be disappointed with them.