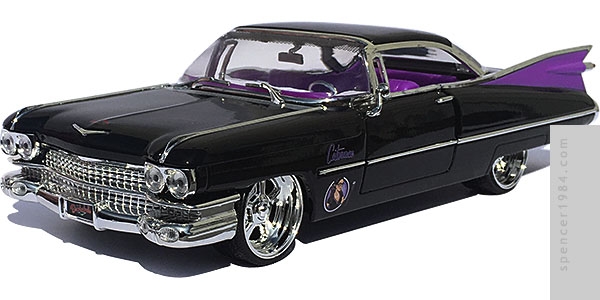 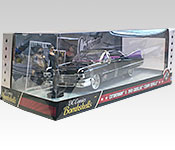 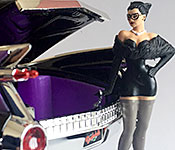 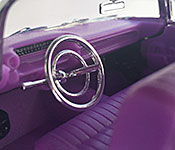 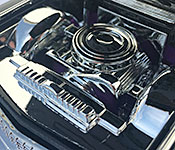 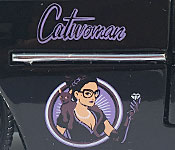 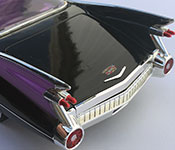 C2E2 and came across the work of Ant Lucia. Lucia was a pinup artist, and his work sparked the idea of reimagining some of the DC Comics characters as classic pinup art. After some internal pitching and an approval to move forward, DC Collectibles went back to Lucia to come up with the designs for what would be the first Bombshells statues. The statues proved to be a hit, and the Bombshells line has since expanded to include figures, collectibles, a comic series, and now a set of diecast cars.

This is nearly identical to the box that was used for Poison Ivy, with the only changes being "★ ★ Catwoman & 1959 Cadillac Coupe DeVille ★ ★" is now written under the window on the front panel and the internal die cut piece behind the truck now has pictures and script for Catwoman. The car is held in place with two screws with plastic bands around the doors and hood to keep them closed. There are two stickers on the trunk lid, possibly meant to hold it closed, but they are so far inboard of the edge that they don't do anything. A molded plastic tray does the job just fine, though, making the stickers even more useless. Catwoman is screwed to the base near the front of the Caddy.

Jada has always had a knack for vintage Cadillacs (well...almost always). The casting here is excellent, with smooth panels and sharp edges. The Coupe DeVille's extensive brightwork is flawlessly captured in chrome plastic, recessed into the body so that the finished trim has the proper looking thickness. A little extra care could have been taken with trimming the flash from the hood and trunk "V" emblems, but your milage may vary. Clear plastic is used for the parking lights, headlights, windshield, and back glass. The rear reflectors are clear red with silver paint for the back up lights. The gloss black paint has some light orange peeling in places, but is only visible at certain angles. Flat purple is used for the fins, and while the coverage is good there is a light ghosting between it and the black on close inspection. Cadillac crests are printed flawlessly above the chrome "V"s, and the taillights are painted clear red over the chrome. As with the rest of the Bombshells series, a "nose art" portrait of Catwoman and her name are printed on the sides of the car. As befitting her more refined status, though, these are relatively discreet in the spaces just above and below the front fender side trim. A mesh sun strip is printed across the top of the windshield, mimicking the veil Selina wore in Lucia's original art (a detail that didn'[t make it to the statue or figure included here).

The interior (including the inside of the trunk) is satin purple plastic with bright chrome used for the steering wheel/column and rear view mirror. The color is a pretty close match to the paint used on the fins, and there is a lot of nice detailing including correct seat patterns, varied textures to simulate carpeting, metal, plastic, etc., and a sharply detailed dashboard with a sticker for the speedometer. A few more paints apps would be nice, since the interior of these Cadillacs had as much chrome as the exterior, but that's pretty much off the table for a mass retail release. Jada made up for it under the hood, though, where a solid chrome V8 engine is seated in a matching bay. There are enough details to make it recognizable, and the casting is well done, but it is still simplified. The same is true for the chassis, which is shallow but passably detailed with engine, transmission, exhaust, drivetrain, and frame components. The tailpipes are chrome plated. The wheels are bright chrome five spoke style with wide rubber bands at all four corners.

The hood, doors, and trunk open on nice smooth hinges that move freely and shut tightly. A 1/24 Catwoman figure is also included, holding a necklace in her right hand while her left arm is on her hip. Her top half is sharply detailed and nicely painted, with good attention to the fur texture of her shawl. Her lower half suffers a bit from the same problem that has plagued the rest of the Bombshells series: diecast just isn't the right medium for anything other than blocky or mostly smooth figures. This is most noticeable where her legs kind of blend into each other, and the straps for her garters are poorly defined and unpainted. Still, the overall figure is far more "hit" than "miss," and Catwoman ranks as one of the better figures in a good lineup.

Catwoman was the one that sold me on getting the Bombshells series. Her car is the most anachronistic of the bunch and sports an arguably ridiculous interior, but it all somehow works. Jada's design team managed to pull off the right mix of classy and flashy to perfectly suit Catwoman. Very highly recommended.