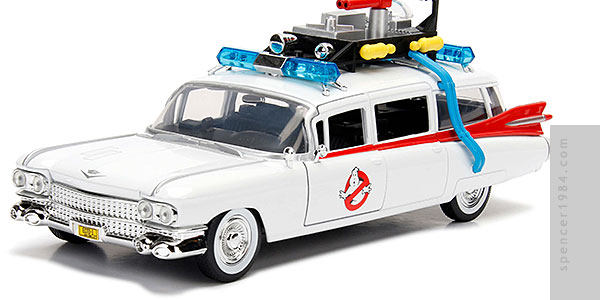 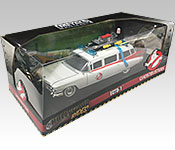 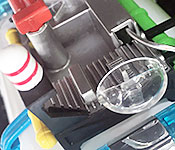 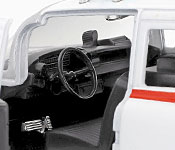 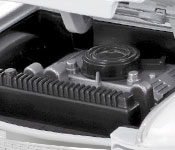 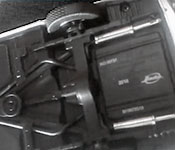 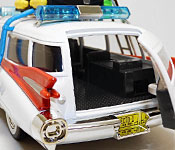 Although the Ecto-1 is one of the most famous and respected cars in cinematic history, that status has more to do with the film than the car. In the mid-1980s, the 1959 Miller-Meteor-built Cadillac was simply an overpriced used car, destined for the scrapper like any of the other thousands of worn out service vehicles. That is, until Ray came along and paid almost as much for this 25-year-old clunker as he would have for a new car (and probably more than, once repairs were taken into account).

This is a variation of Jada's movie-themed packaging, a wrap-around window box with one front corner being all plastic for maximum visibility. This time, the background is brushed metal with rivet lines and a striped band around the bottom fifth. The band is black with a wide red stripe centered vertically and a narrow caution stripe at the very bottom. "Hollywood Rides" is printed under the front panel window on the left, "Ecto-1™" is centered, and the Ghostbusters title and logo are on the right (with the latter forming the bottom corner of the window). The Metals logo is centered on the top panel. Each end flap has the movie title and logo centered near the bottom, so that the red stripe and text lines up with the printing on the front. The back panel has all of the expected product photos, logos, warnings, and feature callouts, while the bottom has the rest of the legal info. Inside, the Ectomobile is held down by two screws into the chassis. A plastic band holds the hood down, a second one holds the doors closed, and the rear door is held partially open by the plastic tray supporting that end of the box.

I've previously noted that while Jada's reused castings tend to be bad, their new toolings are generally excellent. Their Justice League Batmobile bucked the trend with an excellent reuse, so I suppose it was time for them to have a miss with a new offering.

The biggest problem is that the casting looks very soft. There's little to no definition on the window frames (this is particularly bad around the vent windows), the hood louvers are too shallow and the edges are soft, and there is flashing in the front left window. The overall effect is that of a very old tooling or a cheap knockoff.

Further exacerbating the "cheap" look is Jada's choices with the plastic parts. The rear fins are separate pieces assembled onto the body (much like the Polar Lights and AMT model kits), but while parts like this are often used to get sharper definition than what's possible from metal these suffer from the same soft look as the rest of the car. The edges are too rounded, and the taillights are too thick and make no attempt to look like anything other than painted opaque plastic. The fender-mounted spotlight and side view mirror are both much too heavy and fit into the metal with massively oversized plugs. The roof rack is possibly the worst part: the yellow tanks have large parting seams, the green tube has a visibly hollow back, the flasher and siren are solid chrome bits with no texture or paint detail, and the relay box has a wide open back with the hose just kind of floating in the void.

It's not all bad news, though: the chrome is excellent, with sharp detailing of the grille, hubcaps, and rear bumper. The glass is also nice and clear, fitting tightly to the complex frames around the windshield and rear corners. The logos on the doors and license plates are printed elements, and look great with sharp edges and correct placement.

The chassis and interior are solid black plastic, with basic but adequate detailing. Jada continues their trend of chrome mufflers here, with a nicely done set of dual exhausts exiting under the rear bumper. Tires are vinyl with sharply printed whitewalls. Inside, the steering wheel and pedals are separate pieces, with the pedals being done in chrome. There's a radio and radar gun on the dash, and a fair amount of greebling in the back. The seats and floor are nicely textured, with appropriate patterns on both. The engine is represented by a flat panel with separate air cleaner, as per their usual style.

Whoever was in charge of Jada's Charger also got this project. Proportions are all off, having too-short side doors and lacking the long front overhang to give the car a stumpy appearance. Combined with the chopped top, it almost looks like Jada's designer was going for the animation model rather than the movie car. The smaller details (or lack thereof) don't help: the roof pillars are sloped wrong, the headlights are too small and too far away from each other, the louvers on the rear door are missing, the leading edge of the hood is too tall, and it doesn't have any of the blue corner roof lights. If you go by overall length, this scales out to around 1/28.

I was really hoping to like this one. Jada's previous '59 Cadillac was great, and they've been on a roll with their last few TV and movie cars. But this just fails on so many levels, from the weak casting to the overall poor design. Much as I hate to say it, this is such a huge disappointment that it's best to avoid unless you absolutely need an Ecto-1 in your collection.