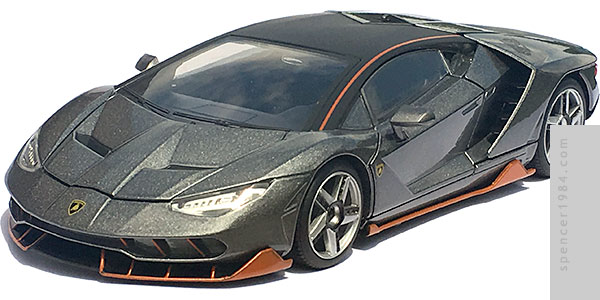 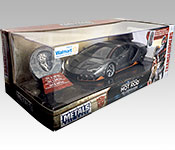 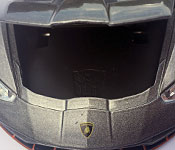 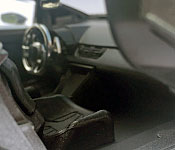 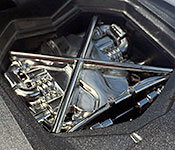 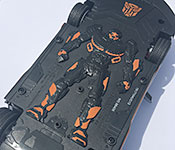 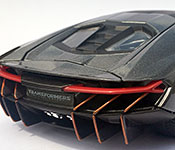 Bumblebee's brother-in-arms, serving on Earth as Viviane Wembly's protector. His initial disguise is her Citroën DS daily driver, but when a little more speed is required Hot Rod chooses a new form: the Lamborghini Centenario

The "collector coin" boxes are essentially a longer version of the standard Jada/Transformers box. The front panel has Transformers logo along the far right edge next to a portrait of Hot Rod. "See robot on chassis" is written in three languages above the portrait,. Jada's Metals/Die Cast logo, the Autobot symbol, "Lamborghini Centenario/Hot Rod," and the movie logo are printed along the bottom edge of the panel under the window. A Walmart exclusive sticker is placed near the top left corner of the window. The end panel near the sticker is folded to create a corner window, and repeats the Transformers logo, Autobot symbol, and Metals/Die Cast logo. The opposite panel repeats the portrait, disguise/name, and symbol from the front panel. The top continues and repeats the Transformers name logo from the front, and repeats the Metals/Die Cast logo. The back panel has co-sells for Optimus Prime, Bumblebee, Crosshairs, Barricade, and Hot Rod, all but Prime offered with and without collector coins. The bottom of this panel and the bottom have all of the legal/contact info. The inner tray is taped at both ends, so you will either need to open both end flaps to cut the tape or be ready to pull really hard on one end to tear the tray free of the tape on the opposite end. Hot Rod is held in place with two screws, while the coin is snapped into a unique plastic tray. Another tray holds the Centenario's engine cover closed, while two plastic bands hold the doors and trunk closed.

The Centenario is a wild design, and Jada has managed to pull off the difficult design admirably. The swooping body lines, complex finned intakes and outlets, and Lamborghini's stubborn refusal to let a panel break along a straight line have all been pulled off beautifully. The main body (including the doors, hood, and trunk) is metal. The various diffusers, spoilers, and winglets are plastic. Lower airfoils are cast as part of the chassis, but others—like the ones behind the doors—are separate assemblies. The headlights, windshield, side windows, and engine window are clear plastic. As with their Lykan HyperSport, two small side windows are actually metal rather than clear plastic, but are painted to blend in with the side windows. The effect here isn't quite as good as it was with the Lykan, but it's a very near thing. The sideview mirrors are soft vinyl with chrome inserts, and the headlight buckets and tailpipes are also chrome. Wheels are plastic with vinyl tires over Jada's standard disc brakes. The only flaw across the entire body is a light separation mark along the edge of the chassis aero, otherwise this is as sharp and clean as it gets on a mass-market diecast.

The interior is very nearly as good as the body, with separate seats, pedals, center console, rearview mirror, and steering wheel/column. The pedals, mirror, and wheel are chrome, everything else is cast inblack plastic with some nice fine detailing, especially on the dash and console. A single sticker makes up the gauge cluster, otherwise everything is cast in its final color. The engine is basic but serviceable, with rudimentary bracing, intake, and suspension details. The shallow cargo area up front has a sculpted-in Autobot logo. As promised on the box, the chassis has a sculpted-in relief of Hot Rod...I didn't like it when Corgi did it with their Batmobiles, and I don't like it now. I doubt it sells it to anyone who will only buy Transformers with two (or more) modes, and it fouls up what could have been a simple but clean chassis for those of us that just want a nice looking replica. The few paint apps added to liven it up don't help.

The paint across the rest of the car does, fortunately. The carbon fiber body of the Centeario is represented here with a nice metallic charcoal that is smooth and glossy. The vents and roof are painted flat black, and a nice copper is used to highlight the edges of the aero and for the pinstripes on the roof. Lamborghini emblems are printed on the nose and each door, and Autobot symbols are printed above each rear wheel. The rear license plate is the movie logo. While the detail painting isn't literally perfect, it's so close that it deserved to get the half point knocked off the casting score above.

The doors, trunk, and engine cover all open and close. The hinges are smooth and will hold in any position. Like the HyperSport, the Centenario has angled door hinges that lift the doors up and away in a single motion. This edition also includes a collector coin. The coin is 2¼" (5.5cm) diameter and made of metal, so it's fairly heavy. One side features a relief of Hot Rod's face, while the other side has "Autobots," the Autobot symbol, the movie title, and Hasbro/Paramount copyright info. It's a nicely done if utterly useless addition to the car.

Jada continues their streak of excellent work with Hot Rod, capturing every over-the-top contour and unnecessarily complex air control surface perfectly. Scaling is a little big, coming closer to 1/23 than 1/24, but for Jada I'll call that a win.

The Lamborghini Centenario has a striking presence, and Jada has rendered it beautifully. Regardless of your thoughts on the Transformers movies, Hot Rod is absolutely worth picking up. Very highly recommended.