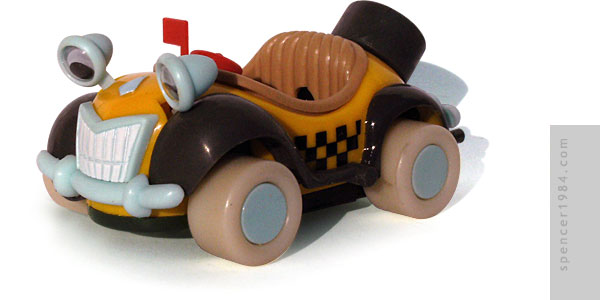 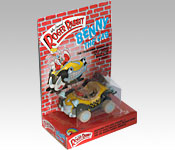 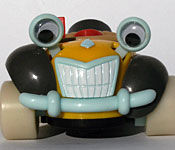 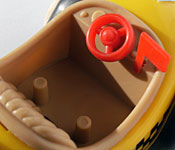 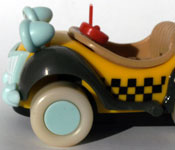 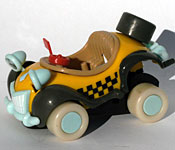 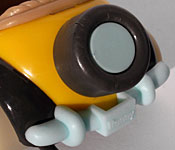 In 1988, Who Framed Roger Rabbit hit both theaters and toy shelves. The movie was pretty groundbreaking - it was the most ambitious combination of live action and animation to date, it featured the first-ever scenes of Disney and Warner Brothers' characters sharing the screen, and it sparked the Disney Renaissance (their previous movie was Oliver & Company, while their following movie was The Little Mermaid). The toys, however, were pretty standard late-1980s fare, when gimmicks were taking precedence over sculpting. Benny here is a perfect example of that concept: fun, but at a pretty high cost.

Benny was the only "accessory" in the 3¾" Who Framed Roger Rabbit "Animates" series, and so has his own unique packaging. The vertical cardback features the same brick backdrop as the other figures, with the movie logo in the top left corner. "Benny the Cab" is written in the same place and style as "Animates" on the other figures, and "The Toontown roadster that springs into action with just a push!" is written in black below his name. A 3½" (8.9cm) deep shelf extends from the cardback, with the movie logo and character name repeated on both ends and the movie logo and feature callout on the front. The top of the shelf has the LJN logo and the plastic bubble with the figure itself. The back of the card has a variation of the movie logo (no white banner), the barcode, photos and a brief writeup on Benny's features, a marketing-heavy version of Benny's bio, co-sells for the other Animates (Eddie Valiant, Roger, Smartguy, and Judge Doom), the LJN logo, and a 45-point proof of purchase. The bottom of the package is solid red, good only if retailers decided to pop out the prepunched hang at the top of the card. Most of the surviving carded Bennys have this punch in place, so there were at least a few retailers who decided to just put him on a shelf rather than deal with the pegs. Benny is held in his plastic blister without a single twist-tie, screw, cord, or rubber band. There is a clear tray underneath him to provide lift and make it look like he's bouncing.

From a purely technical standpoint, Benny here is actually pretty good. Other than the mechanical bits - axles, screws, springs, etc. - he is cast entirely from plastic. Everything fits together very well, with no obvious gaps or otherwise poor fit. This may not seem like much until you realize that - with few exceptions - nearly everything that is a different color is also a different piece. The exceptions here are the teeth, hood ornament, checkerboards, and rear fenders. These are all painted very well, with only a slightly fuzzy edge between the right rear fender and the trunk lid. There is also a slight difference between the gloss of the painted areas and the gloss of the plastic, but it is not too noticeable under normal lighting conditions. The interior is simple, but does include the meter, gauges, steering wheel, and a tuck-and-roll seat. The lack of paint is unfortunate, but the giant footpegs and hole in the middle of the seat are more unfortunate. All five tires are softer "rubber," and the headlight lenses are clear plastic. The spare tire shows some signs of cracking, but the four road tires still look good. There is no chassis or engine detail.

This was what Benny was made for. Push him along, and the fenders move up & down thanks to cams in the front wheels, the eyes pop in & out, and the rear end pops up on a sprung hinge. Each eye also has a loose pupil inside (essentially making them glorified wiggle eyes) so that there is movement here as well. The instructions are a tad...light...but it's easy enough to figure out how to make everything work.

As noted in the opening paragraph, Benny does suffer for his playability. The basic body shell is actually pretty dead-on, with a body that captures the generic "early roadster" look quite well. The most obvious failure is the face, with the eyes on stalks and a mouth that is too tall and narrow. Both of these are concessions made to the movement, and neither should have made it to the final piece. Less intrusive, the running boards are hinged at the rear so their shape is a little off here and they are not connected to the rear fenders. Finally, the tires are wide, square cross-section pieces with flat center caps rather than the classic "donut" tires and domed caps. The Animates series figures were about 1/18 scale, but Benny is a bit small to fit in with them. At about 2½" (6.4cm) across the front fenders and 4¼" (10.8cm) from front bumper to tailpipe, he works out much better as a 1/24 figure, about 5' (1.5m) x 8.5' (2.6m).

It's too bad 1988 was smack in the middle of the Headmasters/Split Seconds/Food Fighters era, because had he not been saddled with the silly gimmick Benny would be a no-brainer. As it is, he's still a fun toy that deserves a place in any Who Framed Roger Rabbit collection.