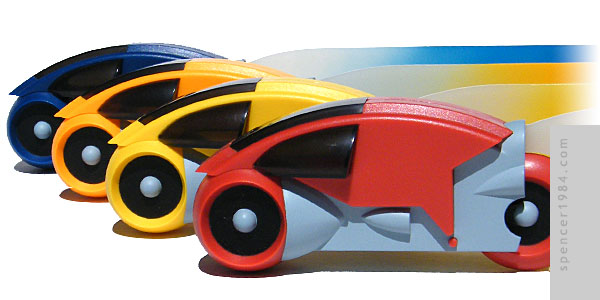 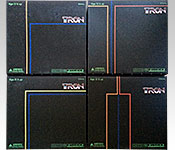 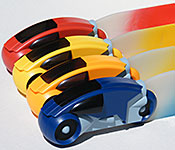 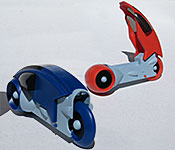 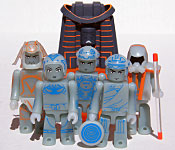 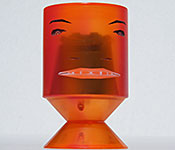 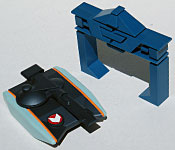 NOTE: For this review, the Light Cycles will be treated as the primary component of these sets and will be reviewed together as they all use the same mold.

In 1976, Steven Lisberger was introduced to the game Pong thanks to a sample reel from the computer firm MAGI. The game and computing world struck a chord with Lisberger, who immediately began work creating a film based on the concept of life within the system. He and his business partner Donald Kushner developed a script, animation samples, and storyboards for what would become Tron, and took them to the major studios at the time. The idea was rejected by Warner Bros., MGM, and Columbia Pictures, but eventually Disney gave it the green light. The story evolved from a purely animated film to a mix of live action and animation, and used techniques that were unheard of at the time. Due to the complexity of the picture, multiple firms worked on different parts of the film. The famous Light Cycle sequence was handled by MAGI, the firm that first inspired Lisberger several years prior.

There were four sets in the original Kubrick Tron series. Each box was approximately 10" (25cm) x 9" (23cm) x 2.5" (9.3cm), and had a hinged front panel that could be opened to show that set's contents. All four boxes were primarily black with thin colored lines flanked by the Tron logo, copyright, age restriction, and ENCOM/MediCom/Kubrick logo on the front panel. The side panels continued the lines and repeated the Tron and ENCOM/MediCom/Kubrick logos. The back panel has the set designation and drawings of the contents at the top, then a large ENCOM logo and all of the legal information near the bottom. The background of the back panel has a sequence of geometric shapes taken from the walls of the movie's Game Grid near the top, and the grid itself below. The inside of the front flap repeats the shapes from the back panel under a large ENCOM logo. The front panel revealed by lifting the flap has the same white grid as the back panel, and features windows cut to reveal the boxes' contents over the name of the item written in a green dot matrix-style font. The toys themselves are held firmly between two shaped plastic trays, so movement within the package is essentially impossible. An instruction sheet and the light cycle wall accessory is in the box behind the trays. The sets are:

MediCom's Kubrick vehicles, like those from Diamond Select's Minimates, use a highly stylized aesthetic that translates to simplified versions of the original subjects. In the case of the Light Cycles, though, the simplification was already done for them. This works towards MediCom's strengths, as they have become expert at clean castings with minimal paint apps. The Light Cycles are primarily cast in their main colors, and the finish is smooth and consistent. The forward and side windows are cast in translucent smoke, and the lower main sections are cast in light gray. The only seams that are not on natural break lines are along the centerline and where the functional part of the front wheel meets the rest of the fuselage. These are nicely minimized, so you really have to be looking for them before you see them. Paint is limited to the wheel centers, and is applied with no hint of bleed or registration issues. Because of their shape, they will not balance on their own, and require the use of the included stand or something similar. The canopy is a separate piece that allows access to the cockpit, and snaps into place so there are no unsightly hinges or tabs to detract from the clean look of the Cycles.

Treating the Light Cycles as the main feature means that there is an embarrassment of riches when it comes to accessories. First, each set comes with the aforementioned stand to keep the cycle upright. The stand is a flat piece of plastic with a notch to fit around the rear wheel and a 90° corner as if the cycle just made a left turn. It is painted with a color-matching fade that beautifully represent the light walls seen in the movie, and is heavy enough to hold the cycle securely.

Set "A" also comes with a pair of Kubrick figures: the titular character and Yori. The figures are done in the "100%" (2.4"/6cm) size, and are articulated at the neck, shoulders, wrists, waist, and hips. They're cast in an off-white and have neon blue paint apps that do a great job of capturing the character designs from the movie. Each has a uniquely sculpted helmet and individual paint apps to give them the appropriate personalities. There is also a single Identity Disc, cast in the same off-white with neon blue stripes, and a baton that would be used to create a Light Cycle on the grid.

Set "B" has the hero Flynn, along with his ID disc and baton. Though he uses the same sculpt as Tron, he has completely different paint apps to distinguish him. Set "B" also comes with a Light Tank, cast in light gray and black with orange stripes and a sharply painted white chevron in a red circle on the forward deck. The turret rotates and can be removed, but isn't really designed to hold one of the Kubrick figures. It is much smaller compared to the figures and cycles here than it was in the movie.

Set "C" features one of the movie's faceless soldiers. It is cast in the same basic color as the other figures, but has a large piece that fits over the head and torso to represent the soldier's armor. This eliminates the neck articulation and limits the shoulder movement somewhat. The paint apps on this figure are neon orange, befitting the Tron baddies. Its staff is cast in clear plastic with neon orange end caps. Set "B" also includes a recognizer, cast in a gray-blue. To recreate the floating polygons that made up the Recognizer in the movie, the parts are all mounted on a clear frame. The effect is very cool, capturing the movie design almost flawlessly. Like the tank, it is out of scale with everything else in this series.

Finally, Set "D" has the movie's two main villains: Sark and the MCP (Master Control Program). Like the soldier, Sark has a unique head piece to reflect his movie design. His helmet is made so that it clears his shoulders, allowing the head articulation to remain. The MCP is a massive piece cast in translucent orange, with the CGI face printed on the main cylinder. Much like the Light Cycles, it's actually a pretty accurate representation of what we saw on the screen thanks to its simple design. The MCP's main cylinder can be lifted off, revealing the old man's face and control chair we saw when the MCP reverted to its original programming before being entirely deleted at the end of the movie. This inner sculpt is very well done, with multiple planes and lines sculpted around a Kubrick head-sized half cylinder. The lines are neon orange, and the head has black and white paint apps to represent the elderly face.

From the outside, there is almost nothing to betray these as being toys. The proportions look good, the uniform bright colors match the CGI look from the film, and the details are all right where they belong. They may be just a hair wider than they should be, and the notches for the stand over the rear wheels isn't 100% screen accurate, but I'm really stretching to call these out as flaws. Scale is very difficult to pin down...even current movies have difficulty at times integrating live action and CGI without sizing issues. If we use the Kubrick figures as standard human height, these are about 1/30 scale. But since the figures are proportionally shorter than either Jeff Bridges or Bruce Boxleitner, we can assume that the Light Cycles may be a little bigger...something in the 1/22 to 1/26 range.

The only drawback to these is their scarcity. Kubricks have relatively short production runs as a rule, and their value only goes up with time. These were originally produced in 2002, and complete sets currently cost around US$50 each (as of Q3 2014). Since I was really only interested in the Light Cycles, I bought incomplete sets whenever I could and re-sold the extra parts that I did not want for my collection to offset the cost. Depending on whether or not you want the complete sets, and in what condition, you may see a wide range of costs. But if you're a fan of Tron or the designs of Syd Mead, these are absolute must-haves. Very highly recommended.