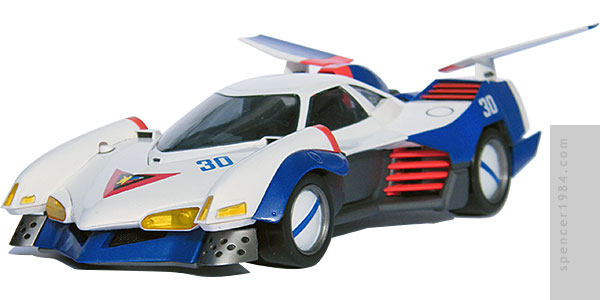 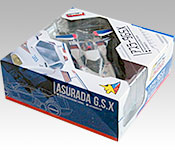 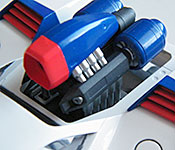 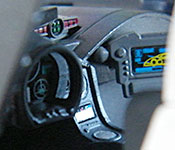 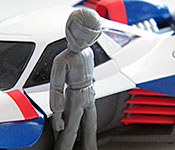 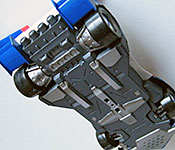 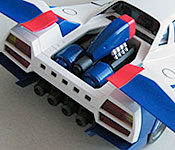 In the far-off future of 2015, artificially intelligent computers called "Cyber Systems" have been installed in Formula racers to help improve racers' abilities and reduce accidents on the track. One of these is Asurada, a cutting-edge system designed by the Sugo Corporation and installed in the G.S.X. When a violent attempt to seize the car is made, Hayato Kazami activates Asurada in order to escape and the AI locks in Kazami's driver data, forcing him to become the new driver for Team Sugo.

The package is a square cardboard box, approximately 10¾" (27cm) on a side and 4" (10cm) deep. The window is an irregular diagonal slash across the top and opposing end panels, with a large portrait of the GSX and Sugo logo on one side of the window and the name, stats, and "Variable Action" logo on the other. The text and photos are oriented in such a way that there is no "front." One of the side panels with the window continues the portrait of the car and repeats the Sugo logo and stats, while the other one has the series' logo, stats, and Mega House/Sunrise logos. These panels are all printed in blue and white to match the GSX. The other two side panels are solid blue, and have line art and full detail drawings of the GSX under its name and stats. The bottom has multiple photographs of the model along with detailed views and descriptions of its features. It also has all of the legal and contact info. Inside, the car is sandwiched between two clear plastic trays and a printed background that mimics a garage or pit stall (with doors around the sides and what appears to be a circular lift centered under the car). The trays are taped together, but nest so securely that the car and accessories can be repackaged easily. A sheet of soft plastic further protects the GSX's paint, and it is placed in the tray on a gray display base that includes the car name, driver, and number printed in white. The base and car are keyed to each other, but not fastened together (a small screw is provided in a separate baggie for those that wish to do so). An unpainted gray figure of Hayato Kazami is snapped into a third tray that's wedged between the GSX's rear and the lower tray. The rear wings are snapped into the underside of the upper tray, approximately where they would be when installed on the GSX. Overall this is fantastic packaging: it looks good, protects the car and accessories, displays nicely, and is easy to open and re-seal for storage.

Mega House continues the excellent work we last saw with the Stealth Jaguar. The plastic body is cast with sharp lines and clean surfaces, assembly is tight and nicely aligned, and the detail work is fantastic.The only place where there is a slight misalignment is the doors, which aren't quite as flush against the body as you may hope. Considering how ridiculously complex the body of the GSX is, I doubt they could have been made to fit any better on a mass-market release. The eight forward lights are all cast in transparent yellow, the windows are cast in transparent smoke, and the rear lights are a combination of transparent red and transparent yellow. The upper half of the GSX is white, the sides are a combination of blue and dark gray, and splashes of red are used to highlight the various vents and scoops. Most of this work is very good, though there is a subtle shift in the white between the doors and surrounding body panels. In addition to the main colors, black is used for the grilles, vents, and some small panel edges. Silver is used for the mirror lenses and lower engine components. The Sugo logo and blue #30 are printed on the hood, and a white #30 is printed on each flank. The chassis is fantastic, with lots of sharply cast and painted details such as the superfluous (but awesome) front drive and suspension components. Even the tabs where it mounts to the base have been thoughtfully integrated into the design. The wheels aren't quite as nice thanks to seams running down the centers of the treads, but the multiple paint apps are all very well done. The interior is mostly dark gray, with excellent painted details for the instruments, AI interface, and controls. The large data screen has a sharply printed silhouette of the GSX.

A 1/24 scale vinyl figure of Hayato Kazami is included. As with previous figures the detailing and proportions are very nicely done, but unlike those Kazami has a ball jointed head. It's not much, but it does offer some fun expressions without hurting the sculpt. The base is matte black with sharp white lettering and beveled edges, and like the car the printing is sharp and has no problem with opacity. The rear wings snap into place easily, and their hinges hold just about any position easily. Converting the GSX to boost mode involves lifting the engine straight up...an easy enough concept, but made difficult by the fact that everything is tapered the wrong way (i.e., gripping the scoop with enough force to lift it means that you're pinching the tapered sides and effectively pushing it down). This is even worse with the doors - they are nothing but panels designed to stay closed. Plus, they are set so deeply into the sides of the body there's no easy way of getting to them without scratching the paint around them.

As with the others in this series, Mega House did an excellent job capturing both the shown and implied details. Everything from the quadruple exhaust tips to the Asurada interface is here and looks great. Scaling remains consistent with their other Future GPX Cyber Formula releases.

This was very close to being another near-perfect release. The only thing that's truly a problem is the doors: between the color shift and the frustrating operation, Mega House would have been smarter to drop this feature and leave the cockpit sealed. Even so, it's still a very good replica and a worthwhile addition to your collection.