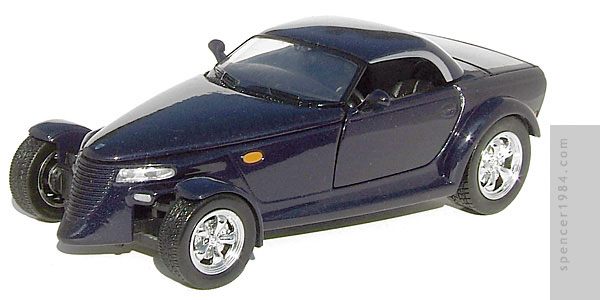 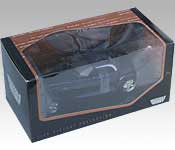 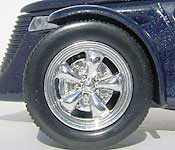 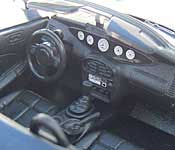 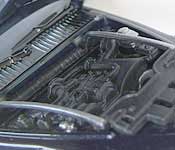 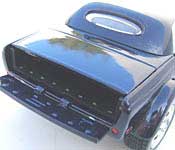 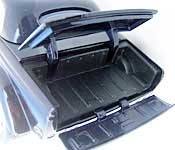 This is a "classic" MotorMax box, and relatively simple in design. The front has the company logo, age restriction, and "1/24 Diecast Collection seta against a plain black background. The latter two elements are dark brown, so they disappear somewhat. The quasi-hexagonal window is bordered in a lighter brown, which segues into a field of "die-cast replicas" written in several fonts and shades to create a wallpaper effect. The end flaps are black with the MotorMax logo centered, and the back of the box has the logo, stock number, and edge of the "die-cast replicas" field. Even the bottom of the box is relatively sparse, with only a minimum of legal info and the bar code. Inside, the car is held to a cardboard and plastic tray that mimics the "die-cast replicas" field, but here says "Howler." "Chrysler Howler" is also written larger and brighter just above the car as a title card of sorts. Two screws hold the car to the tray, while a set of plastic blisters hold the hood & rear closed. A plastic band keeps the doors shut. The box is actually a very nice looking piece: it keeps the car safe and provides enough information to make the sale, but it lets the replica itself do the actual selling.

Excellent work all around, especially considering the MSRP. The body panels are clean and fit together perfectly, the parts are almost completely blemish-free, and the paint is deep & glossy. The only flaw I see is a bit of flash on the left headlight, but otherwise everything looks good. The only trim on the car is around the side windows (silver) and windshield (gloss black), and both look great with no slop or bleed. The headlights are clear with silver painted buckets, and the rest of the lights are all painted. Most of these look good, though there is some bleed around the deep-set taillights. The hood logo isn't very detailed, but is small enough to not detract from the rest of the car. The wheels lose some points for having the brakes cast as part of the outer wheel (so the calipers spin with the wheels), but that's more of a design choice than a casting problem. The interior is expertly cast in satin black, with stickers providing the gauge and radio details. The engine bay is well done as well, featuring separate support braces and a clever arrangement of parts that gives a good illusion of a complete engine.

The Howler features a removable top, opening doors, hood, tailgate, and deck lid, and the front wheels can be posed and are tied to the steering wheel. All of the panels fit together flawlessly, to the point where I didn't realize the top was a separate piece until it popped off. The steering mechanism is way too heavy, but I don't know of a better way they could've done it. The black parts tend to disappear against the indigo body, which helps mask their oversized appearance. Plus, the fact that MotorMax got the front fenders to correctly steer with the front tires gives them some bonus points.

The Howler was a concept car designed to take the Plymouth Prowler into the "roadster pickup" market. It's not as well known as its production-line cousin, but the heritage is obvious in scale just as it was for the show car. The proportions and stance all look great, and everything fits together the way it should: the rear cargo area even opens just like the 1:1. The 1:1 had satin wheels rather than bright chrome, but it doesn't detract from the rest of the look. Scaling looks like a good 1/24 all around.

I was very impressed with this car. To really appreciate it, it should really be seen in bright sunlight: the depth and quality of the paint really only be appreciated under strong natural light (the photographs don't do it justice). Little details like the removable top and engine bay detail further push this to a rating of highly recommended.