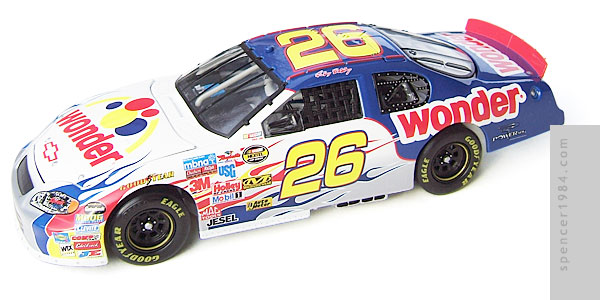 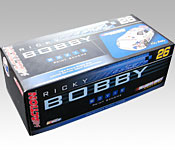 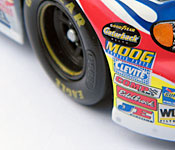 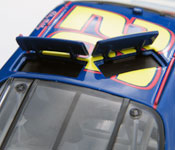 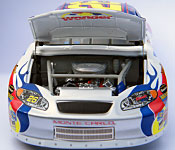 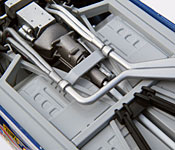 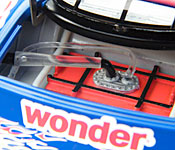 Talladega Nights: The Ballad of Ricky Bobby was the second film in Will Ferrell's Mediocre American Man Trilogy (after Anchorman: The Legend of Ron Burgundy). The "hero" car of the film—and the one that was used in the bulk of the film's advertising—was this Wonder Bread-sponsored Monte Carlo.

Action Collectibles uses shoebox packaging with a lift-off shell and a two part foam tray. The box is very dramatic, with the Action logo, "Ricky Bobby," "Movie Paint Scheme," car number, and movie title on the front, back, and top panels. The front and back panels also include the "Officially Licensed NASCAR" logo and Action Collectibles tagline. The box top has a retouched photo of the model, "Ricky Bobby" signature, and "1:24-Scale Stock Car Limited Edition Adult Collectible." The graphics are color-keyed to match the car inside, which is a very nice touch. One end panel has the two-digit year the replica was issued (06), Action "A" logo and website, barcode, and a silver sticker that includes the driver name, car number, sponsor, car type, edition size (2508), and part number. The other end panel is much simpler, with only the Action and Action "A" logos and copyright information. The bottom of the box has a standard boilerplate that covers all of the cars offered by Motorsports Authentics/Action.

Unlike the Laughing Clown Malt Liquor racer, the Wonder Bread car used the contemporary Monte Carlo. Motorsports Authentics followed suit, using their model of the 2005 car. It features most of the high-end details NASCAR collectors were expecting by then, and improvements in accuracy over the previous generation. So the overall concept remains the same with a diecast body/chassis pan and plastic details, the overall fit and finish have improved. Gaps around the hood, trunk, and roof flaps are tight and even, with only a small step along the trailing edge of the hood. The roof camera looks appropriate, as do the segmented roof rails. The engine is nicely detailed with a silver block, red cylinder heads, and "Chevrolet" scripted valve covers. Extra details under the hood include a separate starter, belt assembly (complete with oil pump, alternator, and power steering pump), ignition wires, and oil line with filter. There is a little slop between the left cylinder head and the intake manifold, but everything else is painted very well. The chassis has a separate oil tank and differential oil pump, and all four wheels have cross-drilled brake rotors with stationary calipers. The tie rod is a bit heavy, a concession needed to allow for the functional steering. Casting and paint on all of the underside components is very neat. Inside the trunk is the usual fuel cell, filler tube, and vent tube. The interior has all of the appropriate padding, vent hoses, and other details, and everything is very nicely painted. Especially impressive is the alignment between the adjustment shafts and the rear window, a tricky concept that seems to have been pulled off flawlessly here. The car's serial number is printed under the rear window as is typical for Motorsports Authentics, but it is less irritating here thanks to the deeper set and angle of the Monte Carlo's back dash. I see no flaws whatsoever with the paint, which is especially impressive considering the complex paint scheme. The panel-to-panel flow is dead-on, and the pinstripes are all correctly registered (including the yellow wheel stripes), and the fine details like the contingency sponsors and window rivets are clean and sharp. One of the few weaknesses with the older car was the windshield retention tabs. That has been remedied here by making the tabs part of the windshield rather than part of the body, a smart move.

Nice as the older Ricky Bobby car was, this is the real star. You can see the improvements Motorsports Authentics made over the years, and how much this benefitted from the NASCAR collector boom of the early 2000s, when collectors were demanding higher standards with each release. The fact that this is the car featured in all the promotional material for Talladega Nights just makes it that much more attractive. Very highly recommended.