The Spy Who Loved Me Lotus
Diamonds are Forever Mustang
The World is Not Enough BMW
Dr. No Sunbeam Alpine
From Russia with Love Chevrolet Truck
Tomorrow Never Dies BMW (Review) 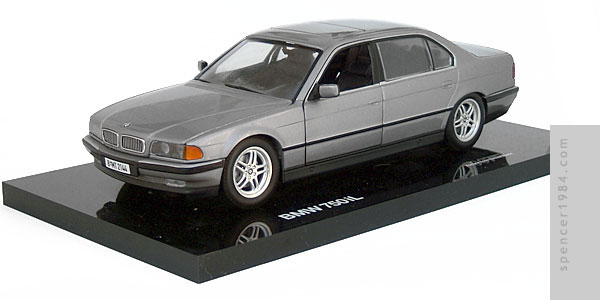 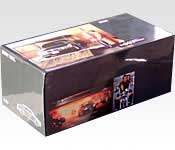 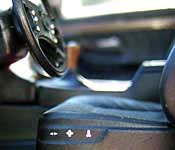 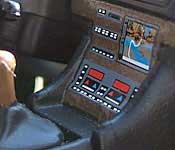 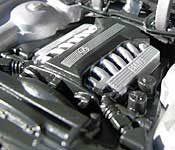 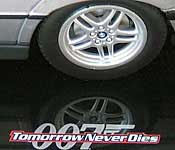 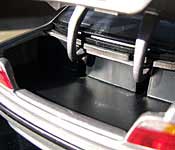 As a tie-in promotional piece with the James Bond movie Tomorrow Never Dies, the car is packaged in a glossy box decorated with stills from the movie along with the "007" logo and movie title. The top of the box features a large still from the scene where Q delivers the BMW to Bond. The box front has stills from the two chase sequences in the movie; one with the 750iL in the parking garage, and the other with Bond and Wai Lin on the R1200 C. One end of the box has a silhouette drawing of the car along with the model number and scale. The other end and bottom of the box are plain, leaving the back to hold all of the appropriate box content information. The car itself is held between two pieces of styrofoam split vertically, with the car itself held to a thick base with two screws. The base is a heavy, flawless black material with "BMW" written near the car's front wheel and the "007" logo and Tomorrow Never Dies title printed near the rear wheel.

Overall an excellent casting, with very clean panel lines and fine casting details. Nothing appears heavy or out of place, though this does suffer from the oversized hinges common to diecast cars. Details like the lights, grilles, and wheels show an equal attention to detail. The car wears a set of movie-accurate (though not factory stock) 7-series wheels, identical to the ones used on this manufacturer's smaller E38. As with that model, the backers/rotors look a bit heavy, though they're less distracting here on the silver car. The paint is nice and smooth, with a consistent glossy finish that looks good without being ostentatious and cleanly painted details that show no slop or bleed. The color looks pretty close, if maybe half a shade darker than what was used in the movie. The BMW emblems in the hood and trunk appear to be separate pieces, and are printed cleanly with legible script. Most other trim pieces are painted or printed directly onto the body (including the "750iL" on the trunk), though the grilles are chrome plated plastic.

The doors, hood, and trunk open, and the front wheels are tied to the steering wheel and can be posed. The hinges are all smooth operating and the panels shut tightly. The trunk lid doesn't open as far as one might expect, but it goes far enough to get most scale accessories in and out (nothing separate is included with this replica).

Though it shares many parts with the 740i, this is not the same replica with a new paint job. Like the full-sized car, it has a longer wheelbase, longer rear doors, and a new chassis and interior. Little details like the twin openings at the front of the engine bay and the accurately-cast window frames that open with the front doors add to the overall package. The license plates have the movie-accurate "BMT2144" number, but are not quite the right size or shape. The interior looks good, with appropriate texturing on everything from the slight wrinkles in the seats to the "wood" panelling. The interior also shows some nice extra detail, with the radio/comfort controls and a GPS navigation system printed on the dashboard and adjustment controls printed on the sides of the seats. The V-12 fills in the engine bay nicely, preventing some of the "flat" areas seen in the V-8 engine. Chassis detail is minimal, with only a separate exhaust system. Scale is pretty good, if not exact - it measures out a little on the small side for 1/24, more like 1/24.5.

As one of the few Bond cars readily available in 1/24 scale, it's nice to see that such care was taken to make sure it's an accurate and well done replica. From the correct body proportions to the nicely detailed interior, this captures the look & feel of the movie car well. There are a few minor issues, but nothing that really detracts from the overall piece. the base is a nice touch, and one of the few instances where it actually does improve the final presentation. The only real downside here is that they were produced in such limited numbers that tracking one down can be difficult. It's well worth the effort, though - highly recommended.