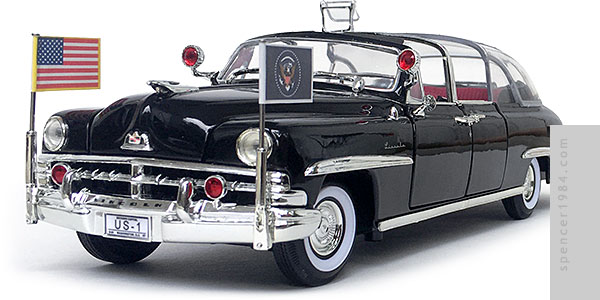 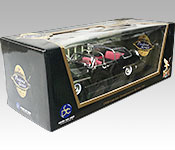 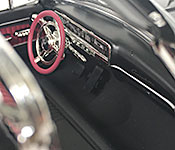 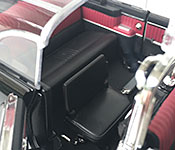 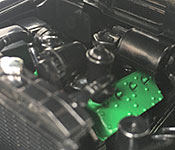 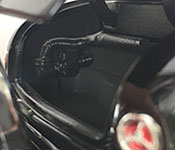 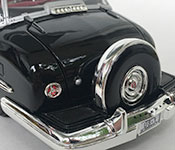 In the early summer of 1950, nine custom-built enclosed 1950 model Lincoln Cosmopolitan limousines, produced by the Henney Motor Company of Freeport, Illinois, were delivered to the White House Garage. A matching four-door Lincoln Cosmopolitan convertible-bodied limousine, modified at the Grand Rapids, Michigan, shop of master coachbuilder Raymond Dietrich, was also delivered. The Dietrich seven-passenger Lincoln was fitted with a Hydramatic automatic transmission purchased from General Motors and then modified to mate with the 337 cubic-inch V-8 engine. Per the order’s specifications, none of the limousines were armored.

The packaging for this limo is identical to the 1939 Lincoln, save for the sticker in front of the car noting this as the 1950 Bubble Top.

The Bubble Top has a very different construction than the previous cars, though the general idea is still the same with a gloss black die cast metal body and chrome plastic details. Paint apps are limited to the middle of the hood badge, the bumper and fender scripts, and the trunk hardware. Bright clear plastic is used for the lights, windshield, upper shield, and side windows, while the canopy is a slightly duller clear to reflect the plexiglas construction of the 1:1 bubble. The lights in the grille and on the A pillars have clear red lenses. The windshield and upper shield have chrome frames, while the large rear canopy has matte silver framing. The two flags are printed material mounted to metal poles that fit into holes on the front bumper. Stickers are used for the license plates (a black & white "US-1").

The engine is Ford's last and largest flathead V8, the 337 (5.5L), mated to the first automatic transmission in a Presidential limo. Both components are painted a pretty accurate Ford green, and the engine is accented with separate parts for the intake, generator, belt assembly, and hoses. The chassis is simple but nicely done, with a separate rear axle and a separate painted exhaust pipe. The tires are hard vinyl with whitewall inserts over chrome caps with painted center crests.

The interior is cast in black plastic with painted dark red panels, chrome hardware, dark gray foot rests in the back, and black flocking for the floor. The steering wheel rim is painted a matching dark red, and the dashboard has printed gauge faces and a silver name badge on the right side.

All four doors, the hood, and the trunk open and close. The hinges are generally well done, though getting the hood or trunk started can be difficult - especially with the continental kit blocking most of the trunk lid. Steering is functional and tied to the steering wheel. Two jump seats can be unfolded from the floor and cowl just ahead of the rear seat. Each of the two flags mentioned above can be inserted into either of the holes in the front bumper, though all the photos I've seen have the American flag on the right and the Presidential flag on the left.

As with the Sunshine Special, the only thing found wanting here are the flags with the same asymmetrical faces and incorrect 50-star design we saw there. Otherwise, this is an excellent replica with some truly nice attention to detail like the varied materials and paints to make the canopy look different from the other glass components. Scaling is a near-perfect 1/24.

This was the first postwar Presidential limo, with the slab sides and integraded headlights that became a staple of automobile design through today. It looks great, and despite not being armored like its predecessor it has a certain weight that feels appropriate for a State Automobile.