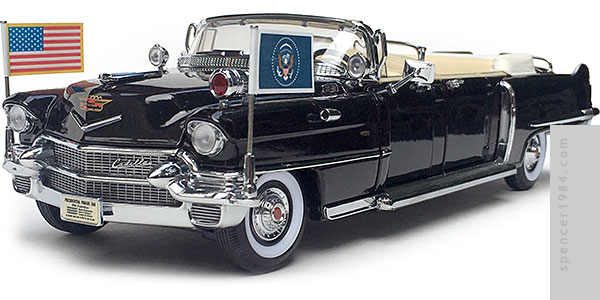 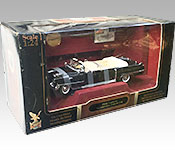 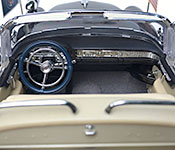 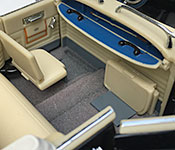 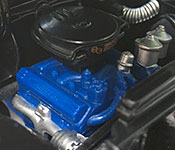 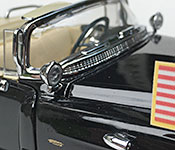 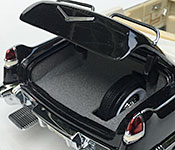 Two identical cars were built by Hess & Eisenhardt, beginning with a Series 56-86 commercial chassis characterized by a 158 inch wheelbase and a 365 cid, 305 horsepower V-8 engine. Because they replaced the previous twin presidential Cadillac parade cars know as the Queen Mary and Queen Elizabeth (named after the largest ocean liners of the day), they became known as the Queen Mary II and Queen Elizabeth II. Like the cars they replaced, they were arsenals on wheels with features like pistol holders and a rifle rack. There were also phones and an extra-large siren with an oscillating rear light. The car tires were fitted with a narrow rim inside the tire to support the car should the tires be shot out. The special Cadillac could travel 115 mph if needed.

The packaging for this limo is identical to the 1938 Cadillac, save for the sticker on the front of the box identifying the car.

As with the other cars in this series, the bulk of what you see is heavy diecast metal with extensive chrome-plated plastic accents. A black wash further highlights the grille mesh, side spears, and running boards. More paint apps and tampos are used to finish the hood trim, fender badges, rear wheel arches, and rear Cadillac script. Clear plastic is used for the headlights, spots, windshield, and wing windows, while transparent red plastic is used for the fender light (the taillights are red and white paint over chrome inserts). Most of the work is good, though the slab sides of the big Cadillac show a bit more orange peel than some others in the series. The two flags are printed material mounted to metal poles that fit into holes on the bumper tips. A sticker is used for each license plate, a cream-colored museum placard listing the car and the Presidents it served.

Under the hood is a decent replica of the big Caddy engine, painted an appropriate blue with silver and black accessories and details. The paint isn't flawless, but is enhanced by details like the painted battery and "Heavy Duty Type" sticker on the front of the air cleaner.

The chassis is a bit simpler than other cars in the series, owing more to the nature of the car rather than a shortcut on Rad Signature's part. The central X brace is a separate piece, allowing a realistic "threaded" look to the driveline and dual exhaust system. Tires are hard vinyl with whitewall inserts over chrome caps with painted rims and nicely printed Cadillac crests.

Inside, the seats, door panels, and center divider are cast in cream-colored plastic with gray and brown paint accents and separate chrome-plated trim parts. The sun visors are painted a matching color, and the convertible top boot is a much lighter off-white. The dashboard is black with a chrome insert, and extends into the doors with painted wings. The steering column and wheel are chrome plated with a dark blue rim. Behind the panel under the middle cowl is a blue-painted cove with two telephone handsets and two rifes (I'm taking this last one on faith - they look a bit more like pool cues). The floor and trunk liner are flocked in medium gray, and the jump seat risers and foot rest are painted a slightly darker gray. Inside the trunk is a fully detailed and removeable spare tire.

All four doors, the hood, and the trunk open and close smoothly. The hinges are still a bit heavy, but Road Signature did as good as could be expected minimizing their appearance. Steering is functional and tied to the steering wheel. Two jump seats can be unfolded from the floor and cowl just ahead of the rear bench, and above them is a fold-down panel to hide the rifles and telephones. Each of the two flags can be inserted into either of the holes in the front bumper, and as noted above the spare tire can be removed from the trunk. Finally, a 24K gold plated collectors' coin is packed in next to the flags and instruction/info sheet.

As expected, the car is a faithful representation of the original limousine. Somewhat less expected, the American flag is the 1959/60 49-star design. The exhaust ports on the back bumper are properly located, but lack any casting or paint definition so they look a little flat. Scaling is a good 1/24.

There are a couple of little details that could have been done better: the weapon storage looked better in the '38, and the light coloring of the seats is a bit too bright, riding dangerously close to cheap-looking "translucent" territory. But on the other hand the grille is as good as it gets at this scale at any price point, and the dashboard is fanstastic. It's still a win, but maybe not quite as brilliant as some of the others in this series.