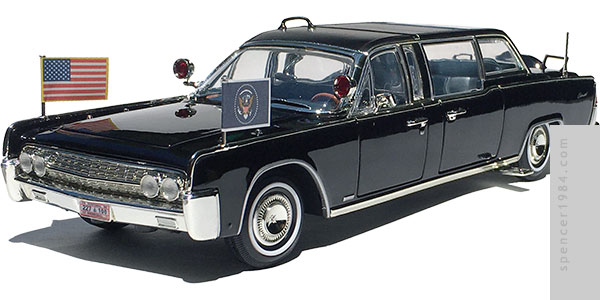 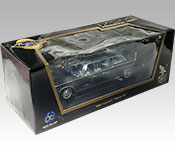 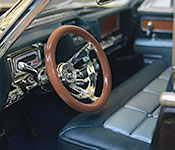 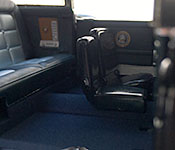 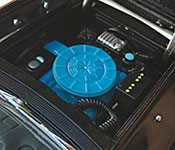 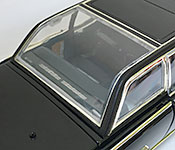 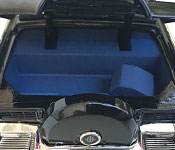 This presidential vehicle earned the name "Quick Fix" because it was put back into service just five months after the Kennedy assassination. The "Quick Fix" was actually the Lincoln X-100 - the same car President John F. Kennedy had been riding in the day he was shot...immediately following the assassination, the government decided as a cost savings to rebuild the limousine rather than order another. New modifications protected passengers with the addition of bullet-proof glass. The large glass panel directly above the rear seat weighed 1500 pounds and in 1964 was the largest piece of curved glass ever made. Renovations included a new engine, titanium armor plating, an updated 1964 grille, and was repainted in midnight blue then returned to the White House in May 1964. At the urging of the new President, Lyndon Baines Johnson, the car was repainted black to reduce the stigma that he was riding in a death car.

The packaging for this limo is identical to the 1939 Lincoln, save for the sticker on the front of the box identifying the car.

The most obvious change from the Kennedy car is the all-new roof panel, made from a combination of clear and chrome-plated plastic. These solid panels have vinyl textured areas painted flat black, leaving the chrome edges visible as trim. The front deck has been modified to include the four small silver flag lights and the front bumper has been updated to the smooth style without the red lights. Gloss black replaces dark blue, though only on the outside: the interior and trunk liner remain blue. Both have also received minor updates: there is now a third seat between the two fold-down seats in the rear, and the trunk has had the spare tire removed and the auxillary AC unit is now in its place.

The engine and chassis remain largely unchanged, save for the addition of two steps for the Secret Service, one ahead of each rear wheel. The tires remain as they were, but now wear contemporary hubcaps rather than the previous car's '57 Lincoln Premiere wheel covers.

The new rear seat also folds in half, but does not retract into the floor as the other seats do.

The "Quick Fix" went through a number of changes as it continued to serve in an official capacity through 1977. This replica most closely matches its current appearance in the Henry Ford Museum, after Johnson, Nixon, and Ford all made their respective updates. The only place where it substantially deviates is the placement of the red lights: here they are in the windshield-mounted spots, whereas they should be the inboard set of headlights. The lenses appear to be nearly the same size, so it would be a tricky but not impossible task to switch them for a 100% correct appearance.

I've spoken elsewhere about the reality of diecast manufacturers needing to squeeze as much out of a mold as possible, a task made nearly impossible when Road Signature started releasing cars that were essentially one-offs with only passing resemblances to anything that came from the factory. I fully expected this to be their one chance to cash in, by sticking a roof on the Kennedy car and calling it a day. But they actually went all-in, capturing details both big and small that made the "Quick Fix" unique.