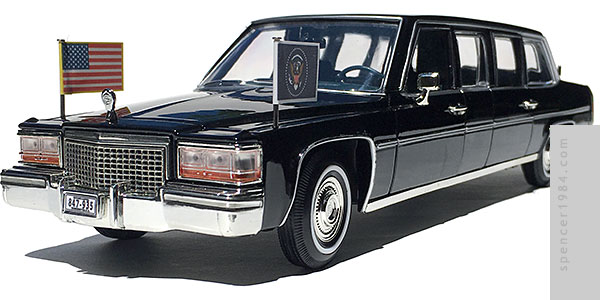 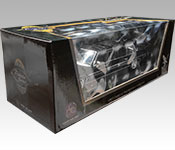 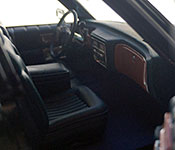 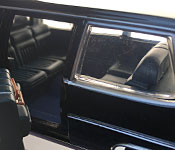 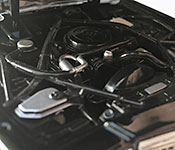 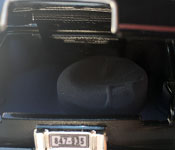 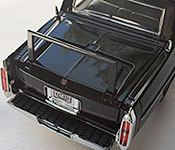 After decades of presidential Lincolns (named, of course, after a president), Cadillac was finally given the chance to produce a limousine for the secret service in the early 1980s. Appearing in 1984 were a pair of 1983 Fleetwoods built by Hess & Eisenhardt. Since the coachbuilder started with production Fleetwood limousines, the cars were stretched only 17 inches and their roofs raised three inches. Power for both came from Cadillac's own massive 500 cubic-inch V8.

The packaging for this limo is identical to the 1939 Lincoln, save for the sticker on the front of the box identifying the car.

Although this is the first Presidential Cadillac in decades, styles of the time mean that a lot of what we see here is similar to the previous car. There is a bit more paint this time around, used for the side spears and window surrounds in addition to the wheel arches and black washes we saw on earlier cars. These paint apps aren't quite as good as those, with some rough spots on the side trim and wheel arches. The black wash on the grille still looks good, though, and the window trim is nearly perfect. The headlights and windows are all clear, with amber detailing for the parking lights and transparent red for the taillights. The trunk lid has a pop-up handle similar to the '72, but it and the roof are smooth diecast this time around. The license plates are Washington D.C. "847-935" stickers, and the two flags are printed material mounted to metal poles that fit into holes on the front fenders.

Like the Lincoln that preceeded it, the Cadillac HT V8 has the traditional diecast design with the top half molded as one plate and the bottom as part of the chassis. A separate piece with braces, hoses, and other details is layered on the top plate to give it some extra depth, and several details are picked out in silver (including the oil pan and transmission on the bottom). The chassis has a separate front sway bar, exhaust pipe, driveshaft, and multi-part rear end. Tires are the usual hard vinyl with whitewall inserts and chrome caps.

We're back to a single-color interior, dark blue with brown accents and chrome trim. The instrument cluster and horn button have printed elements, and the floor is flocked in a matching blue (including the trunk liner). While there's not much in the way of color, the nice use of textures and molded details make it look interesting and realistic.

All four doors, the hood, and the trunk open and close. The doors can be a little tricky to open thanks to the flush fit and closed windows, but by carefully hooking something through the door handles they work just fine. The trunk has a large fold-out handle and the rear bumper can be lowered to provide a step for Secret Service agents to ride on the back of the car. Steering is functional and tied to the steering wheel, but through bad design or bad assembly the whole column moves when the wheels are posed. Each of the two flags mentioned above can be inserted into either of the holes in the front fenders, though all the photos I've seen have the American flag on the right and the Presidential flag on the left.

Generally a good representation of the mid-1980s Presidential limo, though like the Kennedy car it has the wrong color engine - it should be either GM Corporate Blue or black depending on when it was built.

A somewhat unremarkable-looking car that nevertheless represented a major shift in state vehicles: every President through the current administration rode in a vehicle wearing the Cadillac crest. It's another well done pice by the folks at Road Signature, and worth adding to the collection.