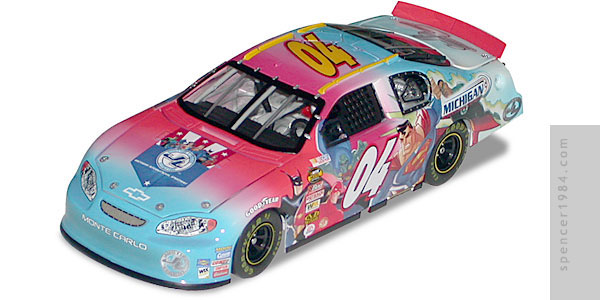 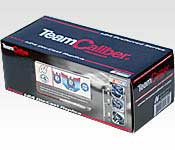 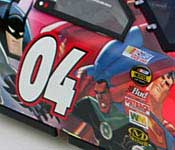 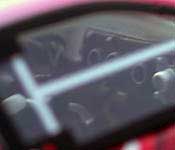 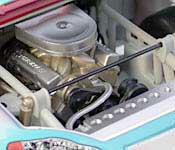 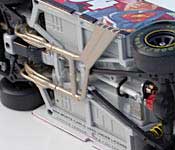 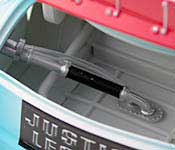 Overall the car is nicely done, though it does suffer from the oversized joints common to diecast cars. This is most noticeable with the roof flaps, including one that doesn't sit flush with the roof. Otherwise, the casting is very well done, and features a lot of nice little details like the roof camera and spoiler supports. The glass is clear and cleanly painted, including the orange donuts around the adjustment points in the rear window. Under the hood, the engine is detailed with plug wires, belts, and hoses, and looks pretty decent if somewhat simplified. The trunk is detailed with the fuel cell, fill pipe, and clear vent line, and looks good. Inside, the details are all nicely painted, and the hoses and adjustment points line up pretty well with the appropriate holes in the body. The chassis has most of the appropriate details, including a nicely done exhaust system, full rear suspension, rear pump, cooler vent, and oil and fuel tanks. The effect is somewhat lost thanks to the obvious screw heads and TC markings, though. The paint scheme is fairly complex, but Team Caliber did a great job of capturing it here. Details like the window fasteners, fuel fill, and wheel markings are very well done, and there is little to no slop between colors. The portraits on the sides of the car are very well done, with no noticeable print errors.

The diecast metal body has an opening hood and trunk, and movable roof flaps. The tires and window net are made of soft vinyl, and the window net is particularly nice. The suspension is fixed, but the front wheels can be posed. A separate metal grill and separate hood & trunk pins finish the body details. No separate accessories are included.

Overall, the look of the car is excellent. If I were to be picky, the location of the paint fades don't match up exactly with the original car, but it barely noticeable. I don't know if the parade car had the roof or trunk cameras, but they don't take away from the overall look at all. There are two oddities on the original car, both of which were caught by Team Caliber. First, Wonder Woman appears only on the hood shield, and is the only member to not have a portrait elsewhere on the car (this is especially strange since there was a Wonder Woman on hand to pose with the car). Second, Superman appears twice on the passenger's side of the car, flying above himself. The upper design was probably supposed to be Jonn in the original design sketches, but when the final paint job was put on the car they ended up with two Supermen.

This is a fun design, and definitely something you'll want to consider if you're interested in NASCAR or the Justice League. Because of its limited production run and discontinued status, prices may vary widely; if you can find it for a reasonable price I would strongly recommend it.