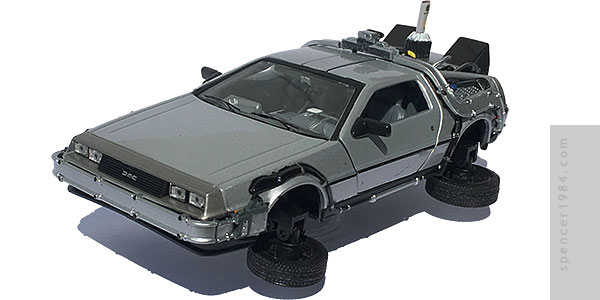 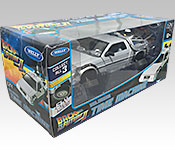 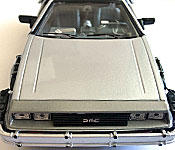 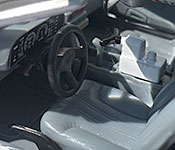 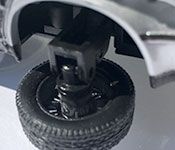 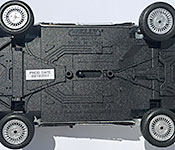 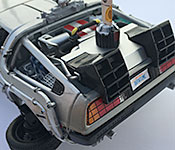 "Doc Brown took his DeLorean time machine concept to all new heights by modifying the time machine with a simple hover conversion from the year 2015 and replacing the plutonium chamber with a 'Mr. Fusion' home energy reactor."

For a simple window box, there's a lot going on here. First, the window is not perfectly rectangular but instead has a sweeping bottom edge that goes up from left to right. Surrounding this window are the Welly logo, "Collect All 3," "Fly Mode" with accompanying closeup of a photo of the diecast's wheel, the Back to the Future Part II title, "DeLorean Time Machine," a heavily Photoshopped picture of the diecast, age restriction, and scale. The top panel has a similar but mirrored sweep across the top edge of the window, further modified to allow a repeat of the wheel photo (this time with an arrow) to stick out into the window more. The movie title, car identifier, and Welly logo are all repeated here, along with a choking hazard warning. The simple "1:24" from the front of the box has been expanded to "1:24 Diecast Metal Model," though still uses the same digital display font. Both end flaps use the same photo, title, identifier, logo, and scale as the front of the box. The back panel has a series of stills from the movie, including street scenes and photos of the Hover Board and almanac. These are set next to the text quoted above and a brief synopsis of the film. The bottom of the box has all of the legal info, co-sells for the parts 1 and 3 DeLoreans, and instructions for operating the wheels and mounting Mr. Fusion. All of this is set against a background that combines black, dark blue, monochrome movie stills, and stripes in bright blue and yellow. It's a bit mad, but actually sort of works. This is in no small part thanks to the way the diecast is displayed, on a clear plastic tray with the wheels partially converted in front of the Hill Valley highway/skyway scene printed on the back card. The ends of the card that fold in front of and behind the car have the movie logo, and the diecast itself is only held in place by the way the plastic tray folds, so getting it in and out is a breeze. Mr. Fusion is in a small indentation under the car, and drops into the slot on the DeLorean's back deck.

This is identical to the fixed-wheel version, right down to the paint slop. It may even be a little worse this time, with marks on the front left fender and lower left door. the printed elements like the DMC and Mr. Fusion logos still look fantastic, though.

The big selling point is the folding wheels, which are operated via a slide lever centered on the chassis. Pulling it back retracts the wheels to their "driving" position, while pushing it forward extends them to their "flight" position. The wheels lock securely in both positions, and is sturdy enough that you can even leave the car sitting on them while partially retracted with no sign of slop or sag.

Although the mechanism's design has been simplified out of necessity, the folding wheels look great in both modes. Welly has gone with a white "OUTATIME" license plate, still wrong for this car but at least the plate itself is correctly colored. The colors used in the back are slightly more accurate to the movie car, too.

Last time around, I called the Part 2 car the one to skip, as it was the weakest of the three. Apparently it just needed a gimmick, because even though it shares many of the same flaws with that earlier release I am much happier having this one. There's definitely something to be said for a well-executed action feature, and it bumps this one from "meh" to "recommended."