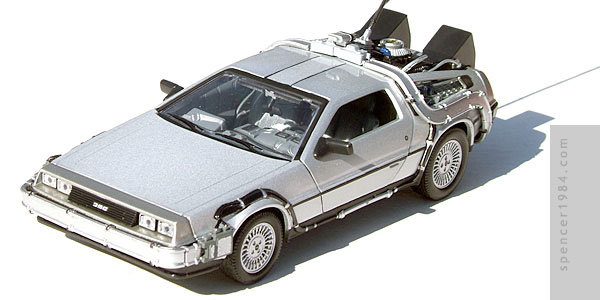 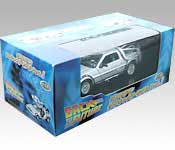 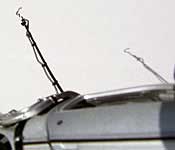 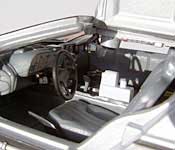 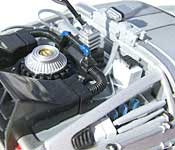 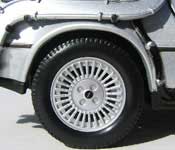 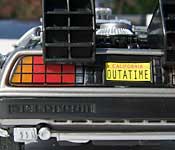 Although not quite as classy as the stock DeLorean packaging by Welly, FuRyu's BTTF1 box still looks pretty good: the blue background is similar, but now features the movie logo and Japanese text. The logo is repeated on the top of the box, along with "DeLorean Time Machine" written in a digital font and three photos of the replica (all three rear detail shots with the car doors open). The end flaps each have the logo, the digital text, and a front view of the model with the doors open. The back of the box has all of the legal information, while the bottom simply has the logo and digital text. The interior tray is plain black, with a single plastic band holding the doors closed. The lightning hook is packed separately in a plastic baggie taped to the underside of the tray.

This is not a straight reuse of the stock DeLorean: the main body is an all-new casting with the side wiring molded into place. Other time machine upgrades include the front bumper surround, side rails, wormhole generator, hook, muffler, interior, and rear deck. The wiring along the sides of the car is somewhat crude, but the plastic detailing is generally well done. The components on the rear of the car even feature a fair amount of plumbing, with hoses to the cooling towers, tank, and bulkhead all cast as free pieces. The main body is lighter, and from certain angles appears to have a metal flake texture. The quality of the detail paint is pretty close to the original, but thanks to the more intricate components there area lot more places to worry about. These range from the excellent (reactor cover) to the terrible (canisters under the left flying buttress). The "DMC" license plate has been replaced by the famous California "OUTATIME" plate.

The only additional feature in this release is the lightning hook, a 5½" (14cm) long piece that plugs into the car just behind the roof. It can be removed easily to store the car back in its box.

Although it's a new body, all of the compliments and complaints about the original release hold true here as well. The new equipment follows that same "close, but not perfect" theme. The big stuff - the towers/reactor chamber/rails - is all there and looks good. But many of the details don't quite stand up to close scrutiny. These include the hoses on the rear deck (it's nice that they're present, but they're the wrong style), the time circuit activator (the plunger is way out of scale), and the side wiring (separate plastic components would have been much better). I also prefer the original smoother, darker silver body paint - something about it looks more "real" than this paint. Finally, the license plate is, for some incomprehensible reason, yellow (not that it should even be there by the time the lightning hook is used...).

The time machine components have helped in certain ways: it's great to have a replica of the famous movie car, and the new equipment has negated the terrible engine from the stock DeLorean. But the extra paint and casting details have left them open for more problems. Overall, if you like the DeLorean or the Back to the Future movies, it's a no-brainer: this is a fun little replica and actually looks quite good as a "two-footer" on a shelf or your desk.