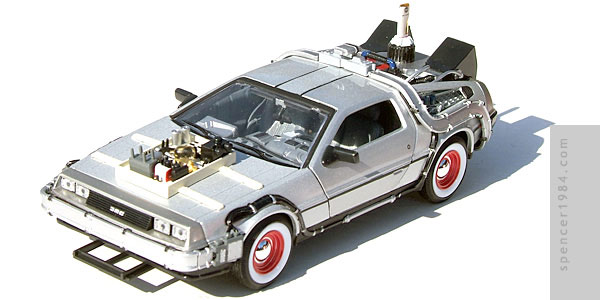 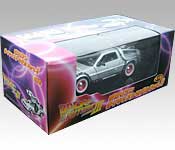 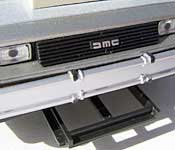 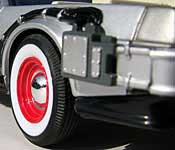 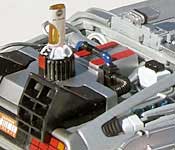 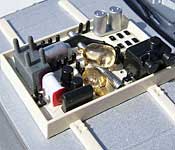 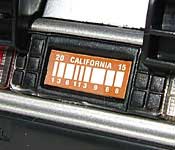 The same box style as the previous movie DeLoreans, now with a new "electric swirl" background, new photos, and updated titles. As before, Mr. Fusion is packed separately in a plastic baggie taped to the underside of the inner tray.

This is visually the most radical departure from the previous cars, thanks to three major changes. First, the 1950s time circuit is strapped to the hood. Second, an extra frame has been added under the front bumper from the scene where the DeLorean was being pulled by the horse team. Finally, it's now riding on a set of wide whitewalls with red wheels and baby moon caps. The time circuit has been simplified, but retains enough of the major details to look pretty good. Even better, it (along with Mr. Fusion and the new wheels) show none of the slop I saw on the BTTF2 car. Plus, the license plate has finally been upgraded to the 2015 bar code.

Nothing new here, although the Mr. Fusion did not fit as well here as it did in the BTTF2 car. I ended up having to put a drop of glue on it to prevent it from flopping over.

Mr. Fusion is still wrong, but the better paint doesn't draw attention to it any more. The tires are slightly smaller and the car is riding a bit lower than it was in BTTF3, but nothing that really ruins the overall look.

After a disappointing "Part 2" car, it's nice to see that the series was able to end on a high note. It's still not a masterpiece, but it's generally well done and provides a nice change from the other DeLoreans. Definitely recommended.