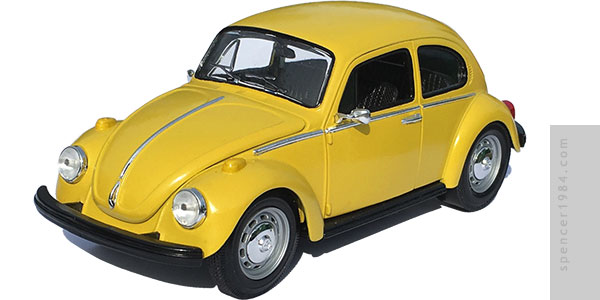 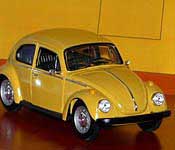 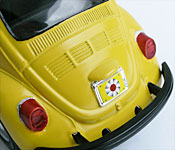 With nearly all of the regular G1 cars finished, it was only a matter of time before I started building the minicars. Part of the holdup was due to aesthetic considerations: most of the minicars lacked the realistic designs of their larger teammates, tending more towards the "superdeformed" look. Before I started, I had to decide whether to make them accurate to their cartoon & toy prototypes (sacrificing realism), or accurate to real vehicles of the era (sacrificing accuracy). In the end, the "robots in disguise" aspect won out, and I decided they had to blend in with other cars as much as possible. Bumblebee here was the first minicar I finished, primarily because VW Beetles are relatively easy to come by.

This particular VW was a Maisto diecast car, and really only required a repaint and some minor modifications. This involved removing the mud flaps, and cutting the license plate bracket off of the front bumper. The latter did require some resculpting to make the bumper look correct, but otherwise this was a pretty simple job. I also replaced the rear tires with a set of racing slicks to give it the "Superbeetle" look of the Penny Racer Bumblebee was based on. Krylon Yellow, Bare Metal Foil, and paint details finished things quite nicely.