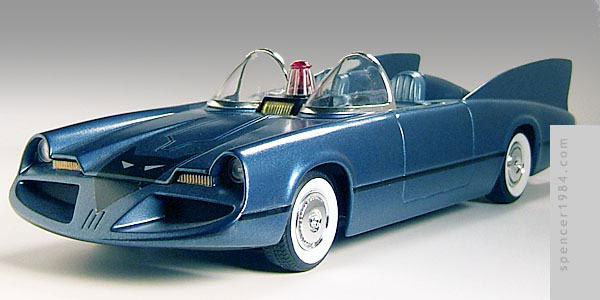 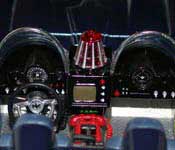 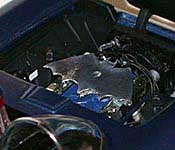 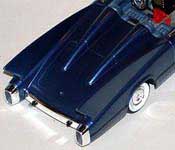 Cool Fact
A two-page spread featuring the "Secrets of the Bat Cave" was created for the comic in 1968. Other than two small antennas flanking the red beacon, the car drawn for this spread appears identical to the Polar Lights model.

Until Hot Wheels managed to acquire the rights to the '66 Batmobile in 2007, fans were unable to get a replica of the TV series car without spending a small fortune (of money, time, or both). Polar Lights did the next best thing, and provided modelers with a kit based on the comic book version of the Futura Batmobile. This model, like the 1950 Batmobile, is very well done. The parts are all clean and sharp, and the overall fit and finish of the kit is great.

The first few times the Futura Batmobile appeared in the comics, it was pretty accurate to the car used in the show. However, it quickly evolved into a new design for the sake of clarity in print. In addition to the new design, the offical color changed from black to blue (blue was frequently used to represent black in comic books, but watching the progression of the car showed a definite color shift). I removed everything that I could, to prepare the body for stripping & repainting. I got stuck briefly when I couldn't figure out how to get the tail lights out without destroying them, so I changed my plan from strip/repaint to sand/repaint. A medium-dark Ford Blue from Plastikote with black vinyl stripes matched the comic colors nicely.

The interior is pretty much box stock, painted in metal colors with medium blue seats and door panels to compliment the body color. The gauge faces were created on the computer, while the rest of the details were hand painted. The oversized telephone handset, phone cord, and CB cord were replaced with scratchbuilt items. The harpoon gun in the passenger's door was a good concept, but by casting it to the door panel the effect was ruined. I did like the idea of having something in that area, though, so I made an important-looking but generic box with hazmat stripes.

Under the hood, Polar Lights went with an almost-Ford engine (like the car itself, details here were simplified). It was easy enough to add the appropriate plug wires and hoses, but I still wasn't satisfied. So to make the engine bay unique, I made a custom bat-shaped air cleaner out of sheet styrene and finished with Bare Metal Foil.

Two other features of the kit were modified before it was finished. First, I removed the gigantic parking lights and converted the holes into grilles by adding mesh taken from a reusable coffee filter. Second, the wheel & tire set provided in the kit was excellent, but wanted to go with something a little different. The wheels were frequently dawn as simple circular designs with wide whitewall tires (the latter was likely a result of shading/highlighting more than an actual design choice). I used wheels from an early-1950s Ford and parts box tires with hand-painted white walls.