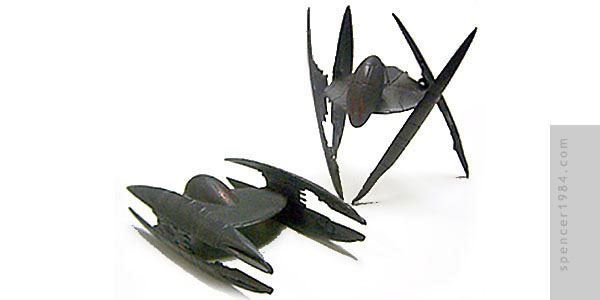 This is a modified version of AMT's Episode 1 Snap-Fast kit. In the beginning of The Phantom Menace, we see a few of these droids in the hangar in "walker" mode. I thought this would be a neat model to build, but unfortunately the only Droid Starfighter model available was the Snap-Fast kit offered by AMT/Ertl. This is actually a well done kit, but the droids in fighter mode are only three inches long, making such a radical custom job seem a bit difficult.

I decided to go for it anyway, figuring I had three ships to try to build a walker from, so I could destroy one or two for the project (the kit comes with three ships and a display stand). I started by cutting the wings in half lengthwise, and modifying their mount points to be able to support the finished droid. The main body came from two body shells. From the first shell I carefully removed the "head" and carved off the extra material. I removed the head a little less carefully from the second shell, saving the lower and forward hull sections. The neck and filler panels were all created with sheet plastic.

One droid remained, and I built that straight from the box to show both walker mode and fighter mode.

Both finished droids were painted dark gray, and then paint, chalk, and charcoal were used to add definition to the fighter.