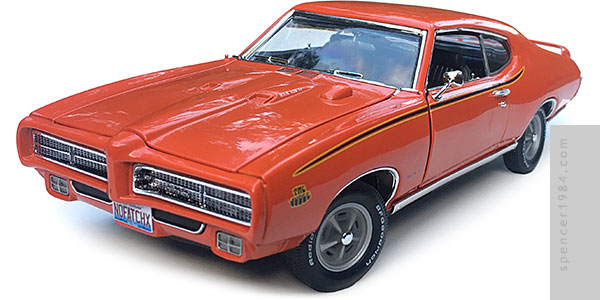 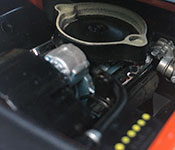 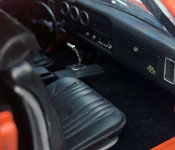 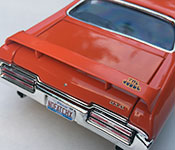 I had always planned to build this kit more or less box stock, but once I started in on it I found out there really wasn't much choice in the matter. It was one of the stranger kits I've built, with parts and subassemblies arranged in such a way that trying to do any real custom work would have been silly given Monogram's perfectly serviceable Goat.

The first oddity was right there in the first step: the engine was a vertical stack of parts, with little regard for natural break lines or traditional parts breakdown. The oil pan and transmission bottom were a single part that was installed from the bottom, then two other parts - the headers and block/heads/intake manifold - came in from the top and were held together with a single screw up through the front crossmember. The front cover/alternator/power steering pump was another single piece, but it didn't attach to the engine - it instead got glued to the fan shroud/fan and just sat really, really close to the engine. Weird.

Once assembled it was passable, especially with a little Pontiac engine blue on the appropriate parts to create a little visual grouping. I also painted the headers with some Typhus Corrosion, detailed the accessories, and cleaned up the prepainted air cleaner.

The chassis was pretty straightforward, though it's been a while since I've seen a kit that suggests heating and melting parts as part of the assembly process (the ends of the tie rod, in this case). The fuel tank was nicely prepainted, and there was a good combination of flat and satin parts to add some visual interest. The exhausts needed to have their seams cleaned up, and I thinned the edges of the tailpipes, then repainted them silver with Molotow Liquid Chrome for the tips.

Inside, most of the trim had been prepainted nicely, though the dashboard was devoid of everything but the "Judge" badge. So I painted the various bezels and switches. Like Gunze-Sangyo's kits, the seats here are a softer vinyl. Unlike those, though, only the pads are vinyl here - the buckets are multi-piece hard plastic assemblies that allow the front seats to tilt forward. Another nice touch was the pre-flocked floor.

Finally, the body was very nicely finished and packed in a separate compartment to keep it tidy. The badges and graphics were prepainted, but the chrome was all separate pieces that generally went together nicely.

Only a couple of small details were needed to make this fully screen accurate. The tires decals came from Fireball Modelworks, and were applied using my usual Glosscote-decal-Dullcote process. Lastly, the license plates were a custom set I drew up and printed.

All in all, it was an aggressively OK kit. Some great ideas, some not-so-great ideas, and a few really weird assemblies that really needed better tolerances than what Testors provided. I'm glad I gave this a shot, but wouldn't really recommend it or rush to get another one myself.