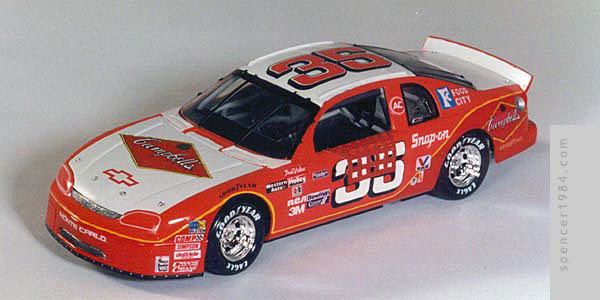 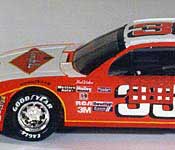 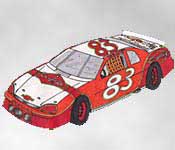 Cool Fact
The winner of the "Art of Soup" contest was Dino Sistilli, with his sheet of commemorative postage stamps featuring soup in glass jars. Along with the prizes he won, his art was featured at the Andy Warhol Museum in Pittsburgh, Pennsylvania.

This car was my entry in Campbell's Soup 1997 "Art of Soup" contest. Because I was working with a deadline, I built this model as a curbside kit, and left engine and interior detail to a bare minimum. The chassis is actually from a mid-1980s Ford Thunderbird stock car. I used it instead of the correct chassis for two reasons. First, I knew I was not going to add much detail to the kit, so I did not want to waste a good NASCAR chassis on a curbside model. Second, the roll cage from the T-Bird is much simpler than what was in the Monte Carlo. Since I was going to be moving the model around a lot (this was before I had my own camera, so I needed to bring the car to a professional photographer to get the pictures taken), and I wanted to have as few parts break off as possible.

The car was painted Testors Gloss Orange, Gloss Red, and Flat White: everything below the yellow stripe is red and everything between the stripe and the white section is orange. The decals on the front fender and c-pillar are from the #3 Goodwrench stock car, and the #35 decals are modified from the Quincy's Steak House T-bird (the door numbers were originally red; I carefully cut out the outline of the numbers with an X-acto and applied the outline over a white painted section of the body). The Campbell's decals on the hood and rear fenders were hand made, and copied onto decal paper.