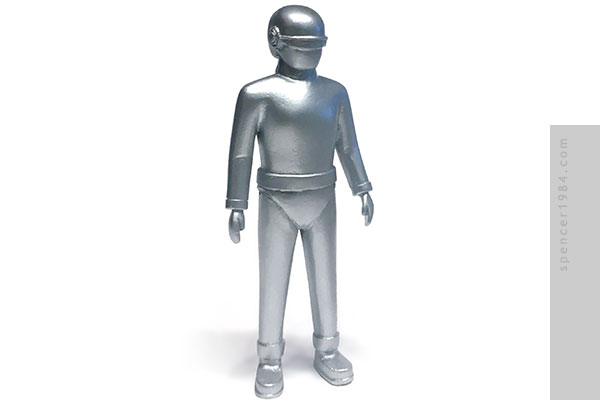 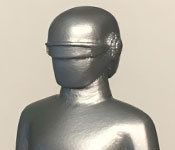 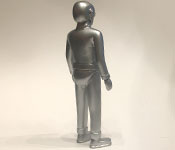 In the mid/late 1990s, GEOmetric Design broadened their already substantial line of sci-fi & monster figure models with the "Micro Mania" series. Smaller and simpler than their 1/6 and 1/8 models, they were usually billed as 1/25 scale but tended to be more of a "whatever fits in the package." Sculpted by Joe Simon, Gort fared better than many at just over 3¾" tall and thus was perfect for my collection. So when the opportunity presented itself, I picked one up.

The kit was three pieces plus the base, all molded in off-white resin. Considering its age there were surprisingly few pinholes that had to be addressed. Still, the offset between the front and back halves meant that a fair bit of cleanup was necessary, and the large casting blocks on the feet and wrists made for a slow process of getting the figure ready for paint. In the end I did replace the wrist cuffs with custom styrene parts, but otherwise what you see is what came in the package.

Once the cleanup was finished, I gave Gort a base coat of black primer followed by several coats of Tamiya TS-30 Silver Leaf. He still retains a little bit of texture, but as with UR2EZ I like the finish as gives the robot a cool forged look.