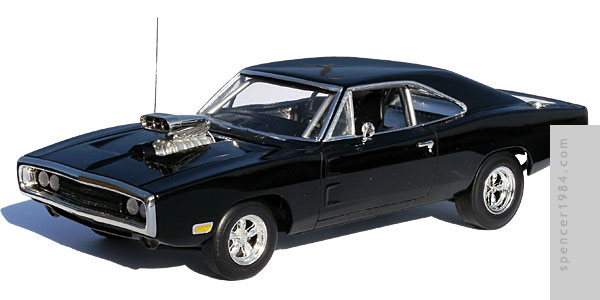 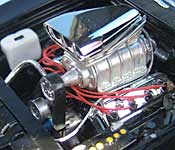 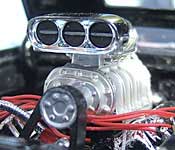 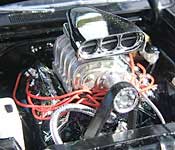 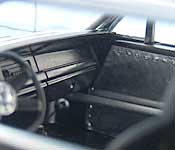 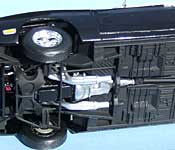 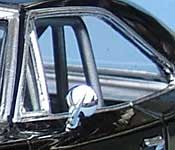 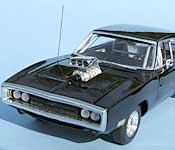 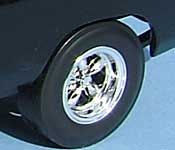 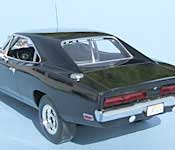 Cool Fact
The supercharged Hemi shown on the garage scene was actually a boat engine that had been dropped into an empty engine bay. This is why the distributor appears to be at the wrong end of the engine: the engine was inserted backwards so that the blower and hat would be facing the correct direction.

Revell's Dodge Charger was a good offering, and all it really needed was some detail work to make it stand out. I used the prebuilt Charger with Dom figure, and started by disassembling the model down to its major components.

The chassis required the least amount of work. I filled in the mount hole in the fuel tank and the extra exhaust holes in the frame rails, then added brakes to all four corners. I also replaced the metal front axle with a pair of short axles so that it wouldn't go through the engine.

Next came the interior. The seat was moved back and a five-point harness was added. I replaced the kit's simple roll bar with a scratchbuilt roll cage and the stock Dodge steering wheel was replaced with a racing wheel to more closely match the movie car. The riveted panels on the doors and rear seat/dash area were made using metal tape.

Outside, all of the trim was done in Bare Metal Foil and the wing window glass was replaced with thinner plastic to look more realistic. To make it look more like the prototype, I painted the grill solid black, added the radio antenna, and removed the front license plate. Finally, I replaced the headlights with a more realistic set from the parts box.

My last step was the engine. I started here by filling in the holes where the front axle went through the block. Details added to the engine include a scratchbuilt distributor with plug wires, a mechanical fuel pump with braided fuel lines, reinforced radiator hoses, a scratchbuilt fuel injection setup, and throttle linkage. The supercharger belt was hideously undersized, so I replaced it with a more appropriate piece from the parts box. The wider belt and new fuel pump prevented the radiator from going back in its original location, so I made a new radiator bulkhead just behind the grill.